At the start of 2001, Russia lowered personal income tax rates dramatically by establishing a single rate of 13 percent. Tax revenues from personal income tax soared that year, leading advocates of the reform to claim that the tax cuts had more than paid for themselves. But was it the cut in tax rates that caused the increase in tax revenues? Prakash Loungani of the IMF Survey interviewed Michael Keen and Anna Ivanova of the IMF, who have just coauthored with Alexander Klemm one of the first studies to answer that question.

At the start of 2001, Russia lowered personal income tax rates dramatically by establishing a single rate of 13 percent. Tax revenues from personal income tax soared that year, leading advocates of the reform to claim that the tax cuts had more than paid for themselves. But was it the cut in tax rates that caused the increase in tax revenues? Prakash Loungani of the IMF Survey interviewed Michael Keen and Anna Ivanova of the IMF, who have just coauthored with Alexander Klemm one of the first studies to answer that question.

Whenever you have a lowering of tax rates followed by an increase in tax revenues, it grabs a lot of attention. This pattern fits in with the flat tax agenda, whose most extreme advocates—in the United States and elsewhere—claim that you can raise tax revenue by cutting tax rates. Given Russia’s leadership role among the transition economies, the reform has been much emulated there, for instance in Ukraine, Slovakia, Georgia, and Romania.

Tax evasion has been widespread in Russia. And the system was not very fair, because taxes were paid by honest low-income taxpayers, but high-income taxpayers managed to avoid their taxes. By introducing a flat tax the government hoped that those who had been avoiding tax obligations would have a greater incentive to pay taxes, and thus the tax system would actually become fairer. Improving tax compliance was one of the big objectives of this reform.

A panel survey of over 3,500 Russians gave us their reported after-tax incomes before and after the reform. We used that reported income to figure out the taxes they would have paid in the year 2000, before the reform, and in 2001, a year after the reform.

Using these imputed—rather than actual—tax payments is no doubt a big limitation. But it is reassuring that the key features of our data match the official aggregate statistics very closely. The average wage in the survey matches the average wage for the Russian population as a whole reported in official statistics. And, strikingly, the increase in income tax revenues among the people in our survey is virtually identical to the increase reported by Russian tax authorities for the economy as a whole. That suggests that our sample probably does represent a reasonable microcosm of what was going on in the country at large.

We used a difference-in-difference approach—a technique similar to the treatment and control group method that is used to isolate the effects of a new drug. For people at the lower end of the income distribution, the tax rates were essentially unchanged after the reform. Any changes in tax payments among people in this group cannot, therefore, be attributed to the tax reform. They became our control group. For taxpayers at the upper end of the distribution, tax rates were much lower after the reform than before. That was our treatment group. Then we estimated by how much tax payments, income, and labor hours have changed for the treatment group compared with the control group after the reform.

The complete opposite of what the more extreme flat tax advocates would have predicted: Tax payments went up noticeably more for the control group than for the treatment group. That’s quite strong evidence to us that the surge in tax revenues that Russia experienced must be due to something other than the tax reform. Why else would tax revenues have gone up among the control group that experienced little if any change in tax rates?

Yes, we do find some indirect evidence of that. Our estimate of compliance is derived by comparing reported incomes with reported consumption. If consumption—how much people say they are spending—is higher than the income they are declaring, they probably have some sources of income they are not telling you about. So we take consumption as a better indicator of someone’s true income than the number they happened to report as their income in the survey. If the gap between income and consumption narrows, we treat that as evidence of increased compliance.

Moreover, the increase in compliance might have been due not to the reduction in the tax rate itself but to changes in other parts of the tax code that took place at the same time and the administrative changes intended to improve enforcement and compliance.

Answering that question was not the main focus of our research, but our view is that the big increase in reported tax revenues simply reflects overall economic growth and, perhaps, some changes in the labor market. When you look at the macro evidence, you see that wages grew very fast across the whole population, just as they did for people across our sample. We also see that almost all sources of tax revenues increased that year, not just the revenues from the personal income tax—that, too, suggests a common underlying explanation. The obvious candidate behind all these developments is the increase in oil and gas prices that took place around that time. The contribution of higher oil prices to the overall growth of the economy can explain why wages went up and why tax revenues went up.

The contribution of higher oil prices to the overall growth of the economy can explain why wages went up and why tax revenues went up.

I believe they are aware of our work, but we haven’t had any reaction.

I think the government views the reform as successful and, as we were discussing earlier, other countries have adopted it too, presumably because they view it as a success. But it is interesting that the Russian government itself is reportedly considering moving back from a flat tax to a somewhat more progressive system.

Copies of IMF Working Paper No. 05/16, The Russian Flat Tax Reform, by Anna Ivanova, Michael Keen, and Alexander Klemm, are available for $15.00 each from IMF Publication Services. See page 48 for ordering details. The full text is also available on the IMF’s website (www.imf.org). 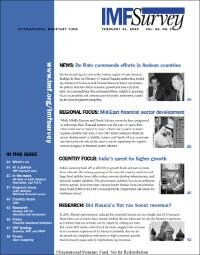