There is a consensus in the international community that more resources are needed to help low-income countries battle HIV/AIDS. The IMF has welcomed this emerging commitment by donors and is working with recipient countries to make the best possible use of the new resources.

There is a consensus in the international community that more resources are needed to help low-income countries battle HIV/AIDS. The IMF has welcomed this emerging commitment by donors and is working with recipient countries to make the best possible use of the new resources.

Over the next several years, funding for HIV/AID prevention and treatment is expected to rise dramatically—from $5 billion in 2003 to $8 billion in 2004 and $20 billion by 2008. This increase represents an enormous opportunity to intensify the fight against HIV/AIDS and to strengthen health systems in general. But such rapid increases in external funding can pose serious challenges for countries seeking to absorb the added resources effectively. If these challenges are not confronted, they could not only compromise the expected benefits but also endanger longer-term political support.

The IMF’s Fiscal Affairs Department sponsored a half-day workshop on June 28 to listen to the concerns of agencies directly involved in this effort, to clarify the IMF’s role, and to explore areas for greater cooperation and coordination. The workshop drew participants from UNAIDS; the UN Millennium Project; the World Trade Organization; the World Bank; the European Commission; the U.K. Department for International Development; the President’s Emergency Program for AIDS Relief at the U.S. Department of State; the Center for Global Development; the Global Equity Center; Harvard University; Friends of the Global Fight Against AIDS, Tuberculosis, and Malaria; the Clinton Foundation; Physicians for Human Rights; ActionAID USA; and Debt AIDS Trade Africa (DATA).

Workshop participants voiced concerns about the IMF’s role in countries expected to receive increased aid. Would IMF conditionality—in the form of ceilings on budget deficits, on government employment and overall wages and salaries, or on debt—prevent health ministries from making use of the increased aid? There was some understanding of the concern that a large boost in financing for the Millennium Development Goals might create macroeconomic pressures that would be difficult to manage, but some fear that an IMF that is focused on short-term macroeconomic stability might put at risk programs designed to save lives and produce substantial long-term benefits. Thus a number argued for the need to balance concerns about short-term macroeconomic stability with the desire to expand beneficial policy programs.

IMF staff identified several concerns associated with the use of grants. The unpredictability of such flows, sometimes caused by donors’ conditionality, can make budgeting difficult. Also, particularly relevant in the light of the surge in funding related to HIV/AIDS, anomalies arise when resources are provided only for some elements of a program (e.g., drugs) but not other critical inputs (e.g., staff training). Further, there are macroeconomic risks associated with large grant flows—including high inflation, which retards growth and acts like a tax especially on the poor; real appreciation of the currency, which can hinder the rural poor from exporting commodities vital to their livelihood; and rising domestic interest rates, which can squeeze social spending by raising public debt service payments.

What are the implications for public expenditure management if new funds flow off-budget? Much of the increased resources for HIV/AIDS are expected to flow directly to nongovernmental organizations. But, in parallel, increased demands may be made on public health programs—demands that will be difficult to meet if the governments themselves do not receive new funding.

Delivering programs to save lives requires more than new financing and good macroeconomic management. International agencies other than the IMF have lead roles in helping countries overcome other formidable challenges. Participants pointed to the inadequate numbers of medical and paramedical personnel in many AIDS-afflicted countries and the limited capacity for training. Increased funding for HIV/AIDS prevention and treatment, they feared, could draw resources away from, and therefore erode, other critical programs in the health sector. Weak implementation and constrained managerial capacity in developing country health systems were also a cause for concern.

What should the IMF be doing to help the effort against HIV/AIDS in poor countries? In the view of many participants, the organization—given its unique role in discussions with country authorities on macroeconomic policies—needs to ensure that in each country the budget has sufficient room for HIV/AIDS prevention and treatment.

There was wide agreement that there was no room for a “one size fits all” approach. Countries differ in the severity of their HIV/AIDS epidemics, the capacity to absorb additional resources quickly, the stability of the macroeconomic policy environment, and the range of challenges faced in raising growth, reducing poverty, and meeting the other Millennium Development Goals.

Participants pressed the IMF for a clear statement of its position on increased fiscal deficits and wage bills, if financed by external grants, and the level of inflation the IMF was prepared to accept as a byproduct of fighting HIV/AIDS. The IMF staff said that, given the need for pragmatism and within recognized bounds of macroeconomic policy objectives, there was scope for some flexibility with regard to the potential short and long-term macroeconomic policy trade-offs that countries face.

As a number of speakers noted, the IMF has become more flexible—for example, focusing less on policies to reduce current account deficits if an adequate and sustainable flow of aid is available. One of the IMF’s key roles, its staff said, is to advise countries on the possible macroeconomic consequences of alternative scenarios and the likely trade-offs that need to be considered. The IMF can also provide advice on ways in which additional resources can be provided to minimize adverse macroeconomic effects.

Most participants agreed that “Dutch disease” effects (inflation, real exchange rate appreciation) associated with massive aid inflows should be of concern to the IMF. There was debate, however, on just how large these effects are likely to be and whether they justify constraining aid flows that could save lives. Participants asked the IMF to quantify Dutch disease effects and make trade-offs explicit. They also saw the task of weighing conflicting short and long-term goals as a political question that should be resolved within the framework of a country’s Poverty Reduction Strategy Paper.

A recurrent topic in the workshop was how to integrate large aid inflows into recipient countries’ budget processes. Most participants considered this critical to ensure country ownership; find the right balance between AIDS-related outlays and other spending, including efforts to reach the Millennium Development Goals; guarantee complementary domestic spending; and avoid duplication. One speaker suggested heavier reliance on NGOs in aid disbursements, given their shorter processing time. The IMF was viewed as the principal outside player in influencing budget decisions. And while the need for country ownership over budget decisions was recognized, there was also a call for greater transparency so that the criteria used in making decisions would be clear to sectoral ministries, donors, UN agencies, and civil society.

IMF staff should coordinate more effectively with donors to get a clearer picture of the likely timing and magnitude of resource flows.

How can countries ensure that an unprecedented level of assistance is translated into favorable outcomes? Participants agreed that a dramatic change was needed in the capacity to deliver public services, and there were a number of suggestions on how to coordinate capacity-building efforts. Some emphasized the need for a medium-term perspective, so that programs for accelerating the training of medical and paramedical manpower and community health workers can be put in place to facilitate the absorption of the increasing financial resources.

Clearly, better communication and coordination will be needed between IMF staff, donors, and other agencies concerned to facilitate and manage the effective absorption and utilization of additional HIV/AIDS resources. There would be considerable value, too, in greater coordination in the field to anticipate likely problems in implementation. The IMF’s resident representatives, in particular, were asked to play a more active role. And IMF staff should coordinate more effectively with donors to get a clearer picture of the likely timing and magnitude of resource flows.

As many participants saw it, the IMF should also have a greater role in facilitating a more informed dialogue between ministries so that the issues associated with budgetary decisions can be clarified and Dutch disease effects can be quantified. Some suggested that the IMF undertake in-depth country studies to determine how countries integrate large flows into their budget process, deal with volatility in resource flows, and cope with pressures on public sector wage rates in selected sectors. Finally, there was support for a follow-up meeting in 2005 to share views on the successes and failures experienced in specific countries where there has been a scaling-up of efforts to treat and prevent HIV/AIDS. 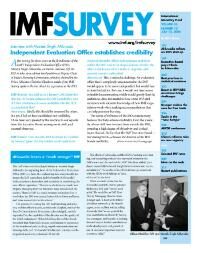