Structural reforms have generally been associated with the notion of increasing the role of market forces, including competition and price flexibility. The term is often used interchangeably with deregulation—that is, reducing the extent to which government regulations or ownership of productive capacity affects the decision making of private firms and households. This perception clearly reflects a broad global trend during the past two to three decades, when structural reforms often focused on replacing general, across-the-board restrictions on competition and entry by new firms with more targeted, less intrusive restrictions. This broad policy shift mirrored a variety of factors, including growing evidence that not only markets but also governments can fail because of problems such as asymmetric information, management and incentive problems, and the pernicious influence of vested interests on regulatory policies.

It would, however, be misleading to equate structural reforms with the goal of abandoning regulation altogether. Fundamentally, structural reforms aim at creating institutional frameworks and regulations that allow markets to work better. Some markets are prone to market failure or inefficiency. In these situations, well-designed government regulations can prevent less than desirable market outcomes.

There is broad consensus about the benefits of reforming tax systems and liberalizing product and labor markets, the trade system, and the financial sector. However, the WEO’s research revealed that in all the countries included in the study (see box, page 106), some sectors were more likely to undergo more reform than others (see chart, this page). Substantial reforms were recorded in the financial sector, selected product markets, and international merchandise trade, where the very nature of the policy environment has changed in many countries. In contrast, minor reforms were made in labor markets and tax systems.

What explains these differences? The research team’s basic hypothesis was that they reflect differences in political viability. An important reason for this could be that the benefits of reforms tended to materialize over time while the costs they inflicted were immediate. More generally, some groups in society often lose out from structural reforms; lower protection from competition and increased price flexibility may, for instance, result in temporary unemployment. These groups often represent key electoral constituencies that have strong incentives to mobilize against reforms. Given the typical length of election cycles and electoral uncertainty, policymakers will choose to focus on the short-term costs of reforms while discounting the long-term benefits.

Comparing the dynamic effects of reforms on growth and unemployment across sectors, the research team suggests that the uneven distribution of benefits over time indeed played a role, as countries appear to have primarily implemented reforms that yielded the most immediate benefits with the least uncertainty. This would also explain why labor market reforms have lagged other areas. The WEO’s research team found that though labor market reforms usually increase growth and lower unemployment in the long term, they often lower growth and increase unemployment in the short term.

For other reforms, particularly of the financial sector and tax systems, the distribution of benefits was not as skewed toward the long term, and the WEO analysis also revealed two other important factors behind the sectoral differences. First, the distributional impact of reforms appears to matter. In the labor market and tax domains, reforms inflict immediate costs on more households and firms than in other areas and involve visible—and often contentious—redistribution effects. And, fiscal sustainability considerations often require that tax reforms be accompanied by politically difficult expenditure adjustments.

Second, competitive pressures can enhance the viability of reforms. Labor markets and tax systems have so far been less exposed to international competition than, for instance, product markets and trade, reflecting the limited mobility of labor and of much of the tax base. In other areas, competitive pressures have been stronger. Similarly, changes in the domestic environment can also increase competition, which, in turn, weakens opposition to reform. This is because interest groups have fewer incentives for costly political mobilization when increased competition reduces their pricing power. Unlike financial and product markets, labor markets have only recently been exposed to such pressures.

Why have some reformed more?

Some countries have been stronger reformers than others. The WEO’s empirical analysis highlighted four reasons for the differences:

How to overcome opposition to reform

Great benefits can be derived from structural reforms, especially if the reforms are packaged to create maximum synergies. However, there is often strong opposition to reform because of short-term losses to specific groups within society. Overcoming these obstacles can be difficult, and many determining factors, such as the international economic climate, are not under the control of policymakers. Nevertheless, the WEO’s research team identified four factors that help determine reforms’ success:

Copies of the April 2004 World Economic Outlook are available for $49.00 ($46.00 academic price) from IMF Publication Services. See page 103 for ordering details. The full text of the Report is also available on the IMF’s website (http://www.imf.org).

How research was carried out

In each area, the indicator series categorized the degree of restrictiveness of government regulation and policies in key dimensions on the basis of actual policy instruments. Changes in an aggregate indicator provided a picture of the overall sectoral regime change. In line with the recent broad trend noted in the main text of the WEO, policy changes that reduced the degree of restrictiveness were usually considered reforms. Since the development of structural policy indicators has only recently begun, the time-series indicators were limited in scope. Nevertheless, they were helpful in illustrating broad trends and developments and in identifying determinants of reforms. 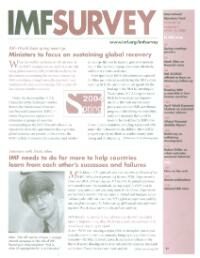 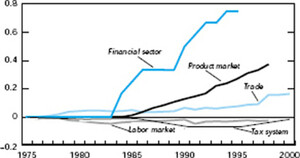 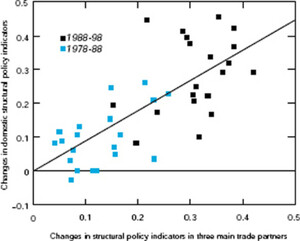