04/27: Statement of the IMF Mission to Dominica, February 18

04/31: Second Stage of IMF Discussions for the Seventh Review of Turkey’s Stand-By Arrangement to Start on February 27, February 20

04/35: IMF Managing Director Horst Kohler’s Statement at the Conclusion of His Visit to Japan, February 25

04/8: IMF Concludes 2003 Article IV Consultation with the Republic of the Marshall Islands, February 13

04/10: IMF Approves Decisions Strengthening the Effectiveness of the Legal Framework for the Provision of Information to the IMF, February 23

“Do Developing Countries Have a Say at the IMF?” IMF Economic Forum, February 5 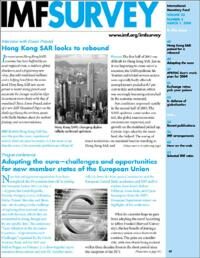