The World Trade Organization (WTO) and its predecessor, the General Agreement on Tariffs and Trade (GATT), were set up to promote world trade. Supporters say it is self-evident that global trade has been boosted by the removal of trade restrictions, but in a rare analysis of this question, Andrew Rose (Professor at the Haas School of Business of the University of California) called into question the effectiveness and, hence, usefulness of the WTO (see IMF Survey, August 18,2003). In a new IMF Working Paper, Arvind Subramanian (Advisor, African Department) and Shang-Jin Wei (Head of the Trade Unit, Research Department) attempt to reconcile the inconsistency between the apparent benefits of the WTO and Rose’s conclusion. And, in another Working Paper, Aaditya Mattoo (Lead Economist, Development Economics and Research Group, World Bank) and Subramanian propose a new architecture for the WTO that would foster development. They spoke with Christine Ebrahim-zadeh of the IMF Survey.

IMF Survey: Rose found no evidence that the WTO has increased world trade. Shang-Jin, Arvind, did you launch your own study to respond to his findings?

Andy Rose asks an important—and, in retrospect, an obvious—question. His conclusion, that the WTO has not increased trade, provokes a number of troubling questions: Why care about the WTO at all? Why care about the liberalization of agricultural markets? Why proceed with the Doha Round? Our intuition was that his conclusion could not be right—at least not as a blanket statement about all countries and all kinds of trade.

IMF Survey: How does your approach differ from Rose’s?

Our approach differs in three ways. First, we define trade and other important variables, such as membership in the WTO and in the Generalized System of Preferences (GSP) arrangements, in a more intuitive way. Second, our methodological approach is, we believe, more rigorous and consistent with the way recent papers suggest it should be done.

But perhaps most important, we do not just aggregate all trade but break it down into different categories: developed versus developing countries; developing countries that became members of the WTO after it was created versus pre-WTO (GATT) members; and trade in protected sectors, such as textiles and clothing and agriculture, versus trade in unprotected sectors. The reason for distinguishing between these various categories is that liberalization under the WTO has not been uniform. For example, industrial countries negotiated down their tariff barriers whereas developing countries availed themselves of “special and differential treatment” that allowed them the freedom not to liberalize. Similarly, while industrial countries reduced their barriers very substantially during the postwar period, they exempted their clothing and agricultural sectors.

IMF Survey: And what are your main conclusions?

We show that GATT and the WTO have promoted trade where they were designed to do so. For example, in 2002, industrial country imports were about 68 percent (or some $2.5 trillion) greater because of WTO membership. The WTO, on the other hand, had no discernible influence in boosting developing country imports. The good news, however, is that developing countries that joined the WTO have seen higher trade associated with membership.

IMF Survey: Does this imply that developing countries have indeed benefited from WTO membership?

We would stress that although the WTO did not increase developing country imports, these countries were able to export more to other WTO members, especially industrial countries. This boost in exports, which we estimate to be about one-third, was possible because industrial country partners liberalized their imports pursuant to WTO membership.

IMF Survey: Do your findings have any implications for the future of the WTO?

The most obvious implication is that the WTO still has considerable gains to offer, and this underscores why it is important to breathe life back into the Doha Round. Another implication is that the large developing countries should stop asking for special and differential treatment and become more forthcoming in liberalizing their trade barriers.

IMF Survey: Much of the discussion surrounding the Doha Round has centered on the need to integrate more fully the needs and concerns of developing countries into the trading system. Aaditya, Arvind, you take a different approach by proposing a development-friendly WTO architecture. What purpose would this serve, and what would it look like?

We are concerned with how the WTO—which is fundamentally about bargaining among countries for improved access to each other’s markets—could foster development. Our paper addresses two issues. First, how can the scope of bargaining be expanded to facilitate mutually beneficial outcomes? We propose comprehensive coverage—that is, the WTO should cover not just liberalization of goods and services but also all factors of production, not just capital but also labor. Recent research suggests that if labor could move even temporarily across borders, that would produce bigger gains than complete trade liberalization.

Second, how can WTO rules foster liberalization while dealing with the inevitable political opposition? This task is particularly difficult because the rules will have to apply to a highly disparate membership, encompassing the United States and the European Union, on the one hand, and India and China, on the other. We believe that flexibility is a key principle. But flexibility is a two-edged sword: if there is too little, the implied rapid pace of integration may be politically unacceptable. But pushed too far, flexibility can easily degenerate into haphazardness.

We suggest a set of principles. For example, countries should not discriminate between domestic and foreign products and suppliers once the latter have entered the domestic market. Pre-entry restrictions are permitted, but there should be a presumption that they take the form of more efficient fiscal instruments like taxes rather than quotas.

IMF Survey: Which countries are likely to benefit from your proposed architecture?

The architecture we propose would be more relevant for the larger developing countries than for very small and poor developing countries. The latter are less able to engage in the reciprocal give and take that forms the core of how the WTO operates—less able because their trading partners find their markets less attractive than those of the larger developing countries. Also, the small and poor countries tend to receive preferential access to the markets of most industrial countries and therefore have less incentive to pursue multilateral liberalization that can end up eroding their preferential access and leave them worse off as a result.

IMF Survey: What would it take to put such a system into effect?

IMF Survey: Is that likely to happen?

That is a difficult question. The political cards are always stacked against liberalization. The costs of liberalization are concentrated among a few producers, while its benefits are diffuse, spread over many consumers. The difficulty that the United States and Europe have had in liberalizing their agricultural sectors illustrates the power of vested interests.

If labor were to move across borders, the political difficulty would be even greater, but the benefits could be huge. Take health care. It seems obvious that with the aging of their population and the explosion in their health care costs, the United States and other industrial countries have a lot to gain by finding lower cost sources of healthcare provision. According to some estimates, the costs of a heart by-pass procedure in India are about one-twentieth of those in the United States. There is a strong case for eliminating restrictions in trade in medical services through WTO negotiations. So the sheer desirability of what we are proposing will, we hope, make it more likely to happen.

Copies of IMF Working Paper No. 03/185, “The WTO Promotes Trade, Strongly But Unevenly,” by Arvind Subramanian and Shang-Jin Wei, and IMF Working Paper 03/153, “What Would a Development-Friendly WTO Architecture Really Look Like?” by Aaditya Mattoo and Arvind Subramanian, are available for $15.00 each from IMF Publication Services. Please see page 29 for ordering details. The full texts are also available on the IMF’s website (http://www.imf.org). 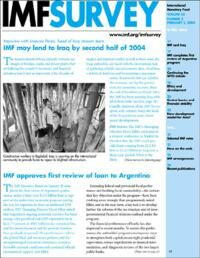