With Dubai hosting the IMF-World Bank Annual Meetings this year, the Middle East and North Africa (MENA) region has received particular attention. Its economic performance and strategies to reignite growth were the theme of a pre-meeting IMF Economic Forum (see page 285). There were also press briefings on the region’s economies and on the West Bank and Gaza and Afghanistan. In addition, several seminars looked in greater detail at several high-profile issues, notably jobs for the region’s burgeoning workforce, greater integration of women in the labor force, the role of oil stabilization funds, and Islamic banking.

With Dubai hosting the IMF-World Bank Annual Meetings this year, the Middle East and North Africa (MENA) region has received particular attention. Its economic performance and strategies to reignite growth were the theme of a pre-meeting IMF Economic Forum (see page 285). There were also press briefings on the region’s economies and on the West Bank and Gaza and Afghanistan. In addition, several seminars looked in greater detail at several high-profile issues, notably jobs for the region’s burgeoning workforce, greater integration of women in the labor force, the role of oil stabilization funds, and Islamic banking.

Although the impact of the Iraqi crisis continues to dominate the news, its impact on the MENA region has not been as large as expected, said George T. Abed, Director, IMF Middle Eastern Department, at a September 18 press briefing. Most of the region’s economies have weathered that storm reasonably well and continue on their growth paths, he said, adding that growth for 2003 is expected to be about 5 percent, in line with the average for developing countries as a group.

Looking beyond 2003, growth prospects for the region will depend on oil prices and the continuation of reforms, Abed observed. Of concern are projections indicating that the region will not grow at sufficiently high rates to make a dent in reducing the unemployment rate—the region’s most pressing problem. Progress on this front would require real growth rates in excess of 6 percent a year on a sustained basis, and that could be achieved only through deeper reforms. According to the IMF’s latest World Economic Outlook, there could be a substantial boost to growth if the size of governments were reduced, said David J. Robinson, Deputy Director, IMF Research Department. In some countries, he added, improvements in institutional quality were key to boosting growth.

With regard to reconstruction efforts in Iraq, Abed said that the IMF has been working closely with the Coalition Provisional Authority and with Iraqi officials to determine the areas in which the institution can be of some assistance. The IMF, as it has done in other postconflict countries such as Timor Leste and Kosovo, intends to assist the Iraqi authorities in rehabilitating and restructuring the country’s financial and monetary institutions. IMF staff had been providing technical support to Iraq but, since August 19, have not undertaken field visits for security reasons. In the meantime, Abed noted, a core group of donors is expected to meet on October 23-24 to review assessments of Iraq’s reconstruction needs and financial requirements.

Elsewhere in the region, according to a recent IMF report on the West Bank and Gaza, the Palestinian economy has contracted by about 30 percent since the beginning of the intifada and the resumed conflict with Israel—a smaller decline than earlier believed, said Adam Bennett, former IMF mission chief for the West Bank and Gaza, at a September 20 press briefing. Security measures imposed by the Israeli government—such as closures and checkpoints—have had a negative effect on the Palestinian economy, but under the circumstances it has managed to stay relatively resilient.

The IMF report also looked at the reform process—how deep it was, what the actual needs for reform were, and what the outstanding issues are, said Karim Nashashibi, IMF Resident Representative in the West Bank and Gaza. Reforms in the fiscal area, especially in improving transparency and accountability, have been impressive, Bennett said, but other reforms, for example, on land registration and the provision of local government services, are still needed.

At a separate press briefing on Afghanistan, Bennett told reporters that, according to a recent IMF report, the Afghan economy is estimated to have grown since the fall of the Taliban regime by about 30 percent (in the year ended March 2003). It is expected to grow by another 20 percent this fiscal year. However, he cautioned that poppy cultivation and the production of opium have become extensive and that this development is threatening the stability of the country and of its economy. He cautioned that the successful eradication of poppy cultivation could be achieved only with the simultaneous development of alternative livelihoods and with enhanced security.

Bennett noted some important successes in Afghan reform, including the launch of a new currency (completed in January 2003) and the broad stability of its exchange rate. Inflation has been negligible since the beginning of the year, under a prudent monetary policy supported by the prohibition on government borrowing from the central bank. Fiscal reforms are also well advanced, with fiscal transparency in the forefront, and customs reform under way. Bennett also welcomed the recent passage of two key banking laws, which he hoped would underpin the recovery of the financial system in Afghanistan.

With a labor force that is projected to grow by 4 percent a year over the next several years, the MENA countries face the prospect of having to create 100 million jobs over the next 20 years. How will it do this? A seminar on the region’s employment challenge focused its attention on the private sector but also sought additional innovative solutions.

Heba Handousa, Managing Director of the Economic Research Forum for Arab Countries, suggested that the region’s youthful workforce could, under better work arrangements, help meet the labor shortage posed by Europe’s aging workforce. Another option, she said, is to create more jobs through greater intraregional trade and investment.

Ahmed Benbitour, a lecturer at the United Nations Institute in Senegal and formerly Algeria’s finance minister, argued that the region’s employment problem has broader and deeper roots and would require a new pattern of development with new institutions and leadership.

The panelists and audience disagreed on a number of points, including the scope for expanding employment in small and medium-sized firms, whether population growth should be addressed through public policies, and whether the relatively large public sector should be shrunk to make room for private sector expansion.

Women in the public sphere

With a draft World Bank report as background, a panel, moderated by Asma Khadar, President of the Jordanian Women’s Union and Coordinator of the Sisterhood Is Global Institute, examined gender and development in the MENA region.

Can female participation in the workforce be increased? Sheika Lubna Al-Qasimi, head of Tejari FZ-LLC, a U.A.E.-based information technology firm, believed it could and highlighted four priorities: better education; increased woman-to-woman mentoring; more women’s organizations, such as business councils; and revision of laws that deliberately or accidentally disadvantage women employed outside the home.

Elaheh Koulaei, head of the Irano-Libyan Parliamentarian Friendship Group in Iran and a professor at Teheran University, pointed to progress in female school enrollment, and Abdou Filali Ansari, Director, Institute for the Study of Muslim Civilization, Aga Khan University Institute, concluded that the most important step toward new thinking on the subject is education about the secular origins of many traditional restrictions on women’s roles.

A vigorous and wide-ranging discussion lent support to calls for greater representation of women in parliaments and other decision-making bodies; increased recognition of, and support for, the valuable contributions women make in cottage industries and the home; and the importance of stopping the abuse of women, notably sexual harassment at the workplace. There was general agreement that Islam gives equal rights to women, but the region’s laws and regulations now need to be thoroughly revised to root out discrimination.

Oil-rich countries often resort to stabilization funds to help them cope with volatile revenues. These funds can play a significant role in government finances and can underwrite important policy initiatives. In a panel on fiscal management of oil resources, Mohammad Mojarrad, Vice Governor of the Central Bank of Iran, noted that Iran devotes one-half of its oil stabilization fund income to promoting private sector projects and implementing reform programs.

But how should these funds be designed, and are stabilization funds appropriate for all economic circumstances? Panelist Rodrigo O. Valdes, Chief Economist of the Central Bank of Chile, looked at the country’s experience with a stabilization fund for copper revenue. Chile has very specific rules for adding and releasing money from its fund to the general budget. These rules are linked to estimates of a normal or reference price for copper and to assumptions about potential GDP output and anticipated inflation. The emphasis, he said, was on prudential savings of volatile copper revenue rather than on current consumption. While it is generally desirable to spend less than the annuity value of an exhaustible resource like oil or copper, a country expecting strong non-oil growth in the future, for example, might choose to spend more now in order not to disadvantage the present generation.

Ismaila Usman, an IMF Executive Director representing a constituency of 21 African countries, reflected on the particular difficulties that low-income countries, notably those with low absorptive capacity and limited budget management expertise, encounter in managing oil revenue. For these countries, he said, creating assets, including human capacity, and developing infrastructure are more vital than “saving for a rainy day” He also noted that Nigeria’s complex revenue-sharing policy, for example, limits the scope for revenue stabilization.

In the discussion that followed the panel presentations, Karin Lissakers, a former IMF Executive Director for the United States, currently working with the Soros Foundation, urged countries to adopt laws requiring disclosure of oil contracts and revenues. Such disclosure, she said, could increase public understanding of the merits of stabilization funds and other measures intended to manage oil income responsibly. And in response to a question about the role that exchange rate regimes could play, Mojarrad said there was probably no single regime that would be right for all countries, but he considered a flexible rate preferable for large oil-producing countries.

Should Islamic financial institutions be integrated into the international regulatory and supervisory architecture, or is a special framework needed in light of their distinct structure and operations? This question was the main topic at a seminar on Islamic finance.

Andrew Cunningham, Senior Vice President, Moody’s Investor Service, saw integration of Islamic financial institutions as both desirable and feasible. He stressed that Islamic financial institutions have an interest in such integration, given their small share in the global banking sector: although growing at a rapid pace, at $360 billion, the total assets of Islamic banking remain small compared with total banking assets of about $43 trillion. But the main impediment to continued rapid growth in the period ahead could be the need for distinct bank regulation and supervision. Other challenges, said Daniele Nouy, Secretary General, Basle Committee on Banking Supervision, were the limited instruments for risk management; corporate governance, including possible conflicts of interest; and the role of Sharia law and shareholders’ interest. She felt that internationally accepted standards were a good starting point but also noted the role of the Islamic Financial Services Board (IFSB) in helping to meet these challenges.

Rifaat Ahmad Abdel Karim, Secretary General of the IFSB, argued that the existing global standards would not address the risks and considerations that are specific to Islamic institutions. Islamic banks, for example, keep their receivables until maturity and are not permitted to sell debt. They are therefore subject to liquidity shocks and have to maintain larger cash holdings than would otherwise be necessary. While he agreed there was no need to reinvent the wheel, regulators and supervisors would need an adequate understanding of how Islamic institutions operate. 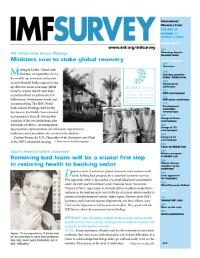