Austria has an expensive public pension system, while spending on health and long-term care is comparable to that in other European Union (EU) countries. The costs of these systems will increase markedly as the pronounced aging of the population translates into more people claiming pensions and needing care. Also, increased longevity will in itself increase the demand for care as health deteriorates with age. In public pension and health care systems, aging poses a major fiscal burden, one that Austria is ill prepared to meet, and the sustainability of Austria’s public finances will be at serious risk absent bold public expenditure reforms, Eskesen says. He recommends timely implementation of further pension reforms and measures to reduce expenditures in other areas. Otherwise, the traditional Austrian welfare state will be threatened.

In Austria, the principal source of income for retirees is a public pay-as-you-go pension system that provides old-age, early retirement, disability, and survivor benefits. Eligibility for old-age pensions depends on the length of the contribution period, with a minimum age requirement of 65 for men and 60 for women under the Allgemeines Sozialversicherungsgesetz (ASVG)—the major pension scheme for the private sector. For civil servants, the minimum pension age is 65 for both men and women.

Under the ASVG scheme, early retirement is permitted at a minimum age (and with a reduced pension) of 60 for men and 55 for women. This will rise to 61.5 and 56.5 years in 2003. For civil servants, the minimum age for early retirement is being raised to 61.5 from 60 for both men and women. Early retirement and disability pensions have become increasingly popular as a result of relatively easy access and generous benefits. In 1999, only about 15 percent of new pensions were regular old-age pensions, and the average retirement age was 57.6 years under private sector schemes and 59 years for federal civil servants. Compared with other European countries, the labor market participation rate of the elderly in Austria is low.

Austria’s pension benefits are also generous by international standards. Total spending on pensions in 2000 was about 14.5 percent of GDP, significantly higher than the EU average of about 10 percent. Under private sector pension schemes, the maximum replacement rate—ratio of pensioners’ initial benefit to their last wage—is 80 percent, while benefits for civil servants are not subjected to a maximum level. Contributions, which range between 10 and 15 percent of gross wages depending on the pension scheme, are insufficient to cover total spending on pensions; the current deficit in the pension system is about 5.5 percent of GDP. Consistent with the concept of solidarity among generations underlying the Austrian pension system, government budget transfers help cover the deficit.

In Austria, the responsibility for almost all health care lies with the federal government. Public health insurance is compulsory and practically all Austrians are covered. Public health care spending is comparable to that in other industrial countries. In 2000, it was about 5 percent of GDP (excluding long-term care spending), close to the EU average of 5.3 percent.

Health insurance contributions and general tax revenues finance the bulk of spending, but private households also provide some copayments and user fees. Contribution rates to the different health insurance funds vary by profession and range from about 6-7 percent of gross earnings for white-collar workers and farmers to about 9 percent for the self-employed.

Long-term care in Austria is less institutionalized than in many comparable industrial countries. Families play a larger role in caring for their elderly relatives, and a significant share of the elderly receive long-term care at home. Nevertheless, the central and local governments are responsible for providing financial resources or services to ensure that the elderly and others in need can receive the necessary care. All citizens have a right to long-term care if they need basic care or domestic help, regardless of their age and without being subject to a qualifying period. Long-term care consists of both cash benefits and benefits in kind provided by public and private suppliers. Spending on long-term care in Austria, which is financed by taxation, is lower than in other industrial countries. In 2002, it amounted to about 0.7 percent of GDP, compared with a weighted average of 1.3 percent for a selected group of EU countries.

Current projections indicate that the share of Austria’s elderly (older than 64) relative to working-age people (15-64 years) will rise to about 50 percent in 2050 from 23 percent today, and the share of very old people (over 79 years) will rise by even more. As a result, age-related expenditures will be higher.

Eskesen notes that the increase in pension spending will depend on the relative number of the elderly, the share of working-age people who are employed, the share of the elderly receiving pensions, and the pension level of recipients. Spending on health and long-term care services will also increase with the age of recipients. In 2000, average spending on acute health care for people 55 and over amounted to about =c 2,900 a person, while average spending on people younger than 54 averaged only about c 800. For long-term care, the average spending per person for these two age groups was about c 500 and c 20. Thus, spending on these categories will rise because the shares of the elderly and the very old (over 80 years of age) are projected to increase. At the same time that age-related expenditures start to increase, the relative decline in the labor force will erode the tax and social security contribution base.

Given the dramatic changes expected in Austria’s demographics and the prospect of a sharp deterioration in its fiscal position, what options are available to ensure the country’s long-term fiscal sustainability? Eskesen explores the outlook for age-related spending and public finance sustainability under three scenarios: a “high case” (assuming solid growth and very successful outcomes of current structural reforms); a “low case” (lower growth and more moderate success of structural reforms); and a case in which additional pension reform measures are implemented.

Even if the pension and labor market reforms already under way are successful in containing early retirements and increasing labor force participation rates (especially of the elderly), Eskesen says, the fiscal pressures associated with the aging of the population will rise significantly. A better growth performance could have some positive effects on public finances but would still not alleviate the problem. Under less optimistic assumptions, the fiscal outlook would deteriorate quickly. The deterioration would be even more pronounced if the cost of health and long-term care increased faster than currently foreseen. Significant and timely improvements in the primary fiscal balance of more than 2-3 percent of GDP would be required to ensure long-term sustainability of public finances.

What is the best way for Austria to accommodate the projected bulge in age-related spending? An increase in taxes is not likely to be an available or desirable option—indeed, the government plans to reduce the tax burden over the medium term. Eskesen stresses that policy measures should focus on reducing spending—first and foremost through pension reforms. If such measures are not taken, or are insufficient, additional savings will need to be generated in other areas, for instance through reforms of the civil service or other welfare entitlements.

Additional reforms include bringing forward the harmonization of male and female retirement ages, further raising the minimum early retirement ages, strengthening the financial incentives for working longer, moving from wage to price indexation of benefits, and lengthening the wage assessment period for measuring benefit entitlement. The sooner such reforms are implemented, Eskesen argues, the greater the long-term savings and, therefore, the smaller the needed fiscal adjustment. Introducing more user fees, tightening eligibility to certain services and benefits, and increasing the specialization of hospitals could also help contain the escalation of health and long-term care spending. He concludes by stressing the importance of adhering to fiscal discipline over the long term, since even small fiscal slippages will have large dynamic effects on public finances. In this context, the needed fiscal discipline and time consistency of fiscal policy could be supported by introducing a formalized fiscal framework.

Copies of IMF Working Paper No. 02/216, “Population Aging and Long-Term Fiscal Sustainability in Austria,” by Leif Lybecker Eskesen, are available for $15.00 each from IMF Publication Services. See page 73 for ordering information. The full text is also available on the IMF’s website (www.imf.org).

The IMF Survey (ISSN 0047-083X) is published in English, French, and Spanish by the IMF 22 times a year, plus an annual IMF Survey Supplement and an annual index. Opinions and materials in the IMF Survey do not necessarily reflect official views of the IMF. Any maps used are for the convenience of readers, based on National Geographic’s Atlas of the World, Sixth Edition; the denominations used and the boundaries shown do not imply any judgment by the IMF on the legal status of any territory or any endorsement or acceptance of such boundaries. Text from the IMF Survey may be reprinted, with due credit given, but photographs and illustrations cannot be reproduced in any form. Address editorial correspondence to Current Publications Division, Room IS7-1100, IMF, Washington, DC 20431 U.S.A. Tel.: (202) 6238585; or e-mail any comments to imfsurvey@imf.org. The IMF Survey is mailed first class in Canada, Mexico, and the United States, and by airspeed elsewhere. Private firms and individuals are charged $79.00 annually. Apply for subscriptions to Publication Services, Box X2003, IMF, Washington, DC 20431 U.S.A. Tel.: (202) 623-7430; fax: (202) 623-7201; e-mail: publications@imf.org. 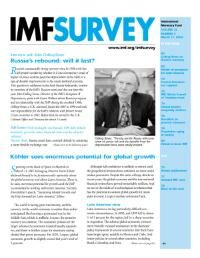 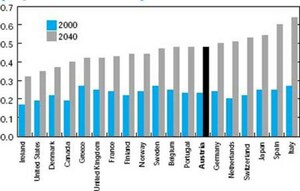