Global economic growth should continue its recovery in 2003, but less strongly than projected earlier this year, Kenneth Rogoff, the IMF’s Economic Counsellor and Director of its Research Department, announced at a September 25 press conference releasing the September 2002 World Economic Outlook. “Overall, we are cautiously optimistic about a global recovery, with the emphasis on caution,” said Rogoff.

Global economic growth should continue its recovery in 2003, but less strongly than projected earlier this year, Kenneth Rogoff, the IMF’s Economic Counsellor and Director of its Research Department, announced at a September 25 press conference releasing the September 2002 World Economic Outlook. “Overall, we are cautiously optimistic about a global recovery, with the emphasis on caution,” said Rogoff.

The IMF projects 2002 global growth of 2.8 percent—identical to its April projections—with an unexpectedly strong first quarter in some key countries offset by a more recent deterioration in performance. For 2003, the projection has been lowered by of 1 percent to 3.7 percent. The decline in the forecast reflects a further sell-off in global equity markets (see chart, this page), a decline in investor risk appetite, softer-than-expected indicators of economic activity in the past few months, further turmoil in parts of Latin America, and heightened geopolitical uncertainty.

Putting the numbers in perspective, Rogoff noted that 3.7 percent was far above the 2.2 percent global growth reached in 2001, thanks to the still substantial monetary stimulus in the pipeline and a continuing inventory rebound. Moreover, the evidence still supports the view that the productivity boom resulting from the tech revolution was real despite the slow recovery.

What is in store for world trade? World trade volume was flat in 2001, and its growth in 2002 is projected at only 2.1 percent, representing a setback in the pace of global economic integration. But prospects are brighter for 2003, with projected trade growth returning to a more normal rate of 6.1 percent.

As for inflation, the World Economic Outlook projects a modern-era low of 1.4 percent in 2002 for the industrial countries and 1.7 percent in 2003. Taking into account various technical factors, Rogoff said “this is virtually the moral equivalent of zero inflation.” But paraphrasing the U.S. novelist Mark Twain, he observed that nevertheless “rumors of the death of inflation are greatly exaggerated, and the world’s central banks need to remain vigilant to the possibility of a steady, slow increase in inflation over the coming years.” In the developing countries, inflation is projected at 5.6 percent in 2002 and 6 percent in 2003, again relatively low by the standards of recent decades.

Turning to prospects for the various regions, U.S. growth is projected at 2.2 percent in 2002 and 2.6 percent in 2003, the latter being at the low end of market expectations. These projections, Rogoff said, reflect negative consumer sentiment, the sharp drop in equity prices, uncertainty over war in the Middle East, and still-weak evidence of an eventual recovery in business fixed investment.

For the euro area, the forecast is for growth of 0.9 percent in 2002 and 2.3 percent in 2003. The main immediate concern in Europe is that domestic demand is too weak to fuel recovery. Europe has enormous potential for growth: it is only since 1995 that the United States has enjoyed higher productivity growth than Europe. But the World Economic Outlook emphasizes that until Europe reinvigorates its inflexible labor markets and addresses the consequences of its rapidly aging population, its growth rate will likely continue to lag that of the United States.

Japan is now the slowest-growing major economy, with growth projected at -0.5 percent for 2002 and +1.1 percent for 2003. Japan appears to be emerging from its third recession in a decade, but there is no guarantee against another similarly bad decade without a determined effort to implement profound bank and corporate restructuring and to take decisive steps to end a period of deflation unprecedented among industrial countries since World War II. Growth in developing countries overall is expected to recover to 4.2 percent in 2002 and to 5.2 percent next year. These projections are, of course, conditional on continuing recovery in the industrial countries. As for Latin America, financial markets have been rocked by political developments and renewed concerns about longstanding macroeconomic vulnerabilities (see chart, this page). The persisting economic difficulties in most countries in the region, and their continuing vulnerability to external financial crisis, underscores that there is no elixir to easily restore sustained high growth. At the same time, some basic lessons cannot be ignored. Developing sound institutions helps economic performance. Weak institutions dampen it. And openness to trade is important for long-term growth.

Financial integration is also important, not least to support trade, but there are nuances to this piece of advice, Rogoff warned. Foreign direct investment and portfolio flows are clearly beneficial for growth. But debt-creating capital inflows, particularly those of a short-term nature, can increase an economy’s vulnerability to financial crisis. Experience over the past decade with surges and sudden stops in short-term capital flows suggests that a rethink of what constitutes prudent debt levels may be in order.

Protesters at the Annual Meetings also captured Rogoff’s attention. He made a point of telling them that the IMF recognizes their idealism and their passion for a fairer and more just world, noting that the organization shares some of the protesters’ ideas about improving the process of globalization. If the protestors were willing to listen to the IMF, he said, they might even find that they shared some of the IMF’s ideas, such as the need to find a dramatically better way to help countries resolve unsustainable debt burdens. At the same time, said Rogoff, “one must also acknowledge that anarchy does not breed prosperity, nor does a retreat into statism and autarchy. Surely, the experience of the last century should have shattered that illusion. Excessive economic isolationism and state intervention imply poverty for the masses and privilege for the few. The process of globalization needs to be strengthened, its benefits broadened, but it should not be reversed.”

In response to a reporter’s question on the reasons for the sharp decline of the Brazilian currency, the real, against the dollar, Rogoff observed that markets believed there were heightened risks. Brazil’s long-term policy priority is to reduce its debt burden, and the authorities need to focus on fiscal adjustment and structural reforms—including opening up more to trade—to broaden sources of growth. Over the medium term, it is essential that the debt burden be brought down gradually. One way to do so is through a strong fiscal program such as the one Brazil has adopted, but this requires a great deal of social and political consensus, and is certainly not easy because the high debt burden itself generates high interest rates. A second important element is achieving sustained growth to help bring down the debt-to-GDP ratios.

Should the IMF be in the business of forecasting at all, when its priority was to help countries resolve problems like unsustainable debt burdens? asked one reporter. Rogoff responded that the IMF’s forecasting is an essential part of its surveillance and policy advice. Member countries rely on the IMF’s forecasts when they formulate their economic policies. Unlike most other forecasts, the IMF brings to the task a global and objective perspective, which is critical for its policy advice with regard to the global economy. The forecasts would have to be prepared even if the IMF didn’t make them available to the public, but in the interest of transparency and since the IMF is already doing the work, it wants to share them with the world.

Also on the minds of the journalists was the possible impact of a war against Iraq. Rogoff explained that the IMF’s projections were subject to a number of downside risks. The possibility of conflagration in the Middle East is certainly one of those risks, he said, as is terrorism. However, it is difficult for forecasters to evaluate the economic impact of a potential war. One likely effect is a spike in oil prices, and the report shows that a $15 rise in oil prices, if sustained for a year, would lead to a 1 percent fall in global output, without taking into account the effects on consumer and business confidence. The IMF sees a great deal of uncertainty more broadly in

the global outlook at this time, including on when business fixed investment will pick up. Equity prices have dropped and heightened risk aversion abounds. Uncertainty over conflagration interacts with these risks, he said, and potentially magnifies them. Clearly, world peace would be a very good thing for the world economy.

The IMFSurvey (ISSN 0047-083X) is published in English, French, and Spanish by the IMF 23 times a year, plus an annual SupplementontheIMF and an annual index. Opinions and materials in the IMFSurvey do not necessarily reflect official views of the IMF. Any maps used are for the convenience of readers, based on National Geographic’s AtlasoftheWorld, Sixth Edition; the denominations used and the boundaries shown do not imply any judgment by the IMF on the legal status of any territory or any endorsement or acceptance of such boundaries. Text from the IMFSurvey may be reprinted, with due credit given, but photographs and illustrations cannot be reproduced in any form. Address editorial correspondence to Current Publications Division, Room IS7-1100, IMF, Washington, DC 20431 U.S.A. Tel.: (202) 6238585; or e-mail any comments to imfsurvey@imf.org. The IMFSurvey is mailed first class in Canada, Mexico, and the United States, and by airspeed elsewhere. Private firms and individuals are charged $79.00 annually. Apply for subscriptions to Publication Services, Box X2002, IMF, Washington, DC 20431 U.S.A. Tel.: (202) 623-7430; fax: (202) 623-7201; e-mail: publications@imf.org. 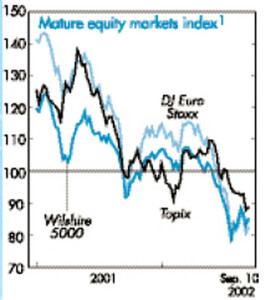 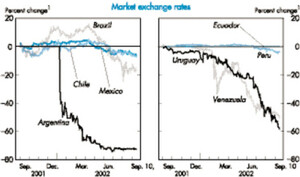