Following is the text of the Communiqué of the International Monetary and Financial Committee of the IMFs Board of Governors, issued on September 28.

Following is the text of the Communiqué of the International Monetary and Financial Committee of the IMFs Board of Governors, issued on September 28.

The International Monetary and Financial Committee held its sixth meeting in Washington, D.C., on September 28, chaired by Gordon Brown, Chancellor of the Exchequer of the United Kingdom.

The Committee observes that the global economic recovery is proceeding, although at a slower pace than expected earlier this year. Growth is expected to strengthen in the near term, supported by a strong policy response across the international community. However, there remain downside risks and uncertainties, as well as medium-term challenges associated with persistent imbalances, underscoring the need for vigilance. IMF members should continue to be ready to adapt policies as necessary in order to foster broad and sustained growth, strengthen policy and regulatory frameworks, and support durable poverty reduction. The Committee underscores the importance of stability in oil markets at prices reasonable for consumers and producers.

In the advanced economies, growth generally is expected to strengthen. However, monetary policymakers should remain ready to respond to developments where necessary and to ease policy further if the risk of economic weakness intensifies and inflation prospects remain subdued. In Japan, monetary easing should help end deflation. In many countries, there is scope for automatic stabilizers to operate, but fiscal policy needs to be attentive to the medium-term challenge of consolidation in order to ensure sustainable debt levels, improve the scope to respond flexibly to future economic shocks, and help address challenges such as those associated with population aging. Structural reforms should also be pursued vigorously to further improve growth prospects and strengthen resilience:

Performance in emerging markets has been mixed, reflecting both global developments and domestic circumstances. While growth in Asia has picked up strongly, several economies in Latin America in particular are facing a deterioration in conditions due to external developments, country-specific vulnerabilities, and policy uncertainties. In countries that have room for maneuver, the policy stance should generally remain accommodative, but countries facing external financing difficulties will need to continue to give priority to restoring market confidence. The Committee welcomes Brazil’s commitment to sound policies. It acknowledges the positive steps taken in recent months by Argentina to address its difficult economic situation and urges the authorities, in cooperation with the IMF, to move quickly to reach agreement on a sustainable economic program that could receive the support of the international financial institutions and provide the basis for the reestablishment of stability and growth.

Many of the developing countries have also been affected by global developments and adverse movements in commodity prices, as well as domestic circumstances. The Committee reiterates the need for sustained international efforts to fight poverty. The Global Development Compact embodied in the Monterrey Consensus and the Doha Development Agenda—based on mutual accountability, country ownership, sound domestic policies and institutions, good governance, increased and more effective international support, and commitment to an open multilateral trading system—was reaffirmed at the world summit in Johannesburg. The Committee looks forward to the effective implementation, with international assistance, of the New Partnership for Africa’s Development to strengthen institutional foundations, governance, and infrastructure. Stressing the critical importance of technical assistance to support this effort, the Committee looks forward to the important contribution that the African Regional Technical Assistance Centers will play. It also calls for urgent international assistance to address the human and economic toll exacted by the drought in southern Africa. It also stresses the positive role of the initiative for seven countries of the Commonwealth of Independent States (CIS-7 Initiative) in improving prospects for enhanced growth and reduced poverty.

The Committee welcomes the Managing Director’s report, “The IMF in a Process of Change," which sets out the reforms under way to make the IMF more effective in promoting greater financial stability and stronger global growth, the progress that is being made, and the agenda for the period ahead.

The Committee supports the steps taken by the IMF to improve the quality and effectiveness of its policy advice and to help countries strengthen policy frameworks and prevent crises. These are the key priorities for surveillance. In particular, the Committee

The Committee will review, at its next meeting, ways of further enhancing the effectiveness of IMF surveillance. It looks forward to further progress in the voluntary publication of country staff reports, building on the positive role that improved transparency and data dissemination by the IMF and its membership are playing in informing the public and supporting financial market assessments.

The Committee notes the substantial progress on the Financial Sector Assessment Program and the standards and codes initiative, including their increasing integration into IMF surveillance. It looks forward to the forthcoming reviews of these initiatives and calls on the IMF to consider ways to build on this progress, together with the World Bank and relevant standard-setting bodies, to address gaps, strengthen technical assistance, and promote broader participation. The Committee notes the importance of enhanced standards and principles on corporate governance, accounting, and auditing, and of stronger national practice. It also underscores the role that precautionary access to IMF financing can play in safeguarding sound policy frameworks in the face of uncertainty in international capital markets. The Committee looks forward to the forthcoming review of the Contingent Credit Lines.

The Committee endorses the IMF’s continuing work on private sector involvement and a stronger framework for crisis resolution to provide members and markets with greater clarity and predictability, including about the decisions the IMF will take in crisis management. In particular, the Committee welcomes the work under way to strengthen the policy on exceptional access to IMF resources. This involves more clearly defined criteria to justify exceptional access and strengthened procedures for early consultation and decision making. The priority now is to finalize and implement the new framework, and the Committee calls for a progress report by the spring meetings.

The Committee strongly welcomes the progress made with the contractual and statutory approaches to restructuring unsustainable sovereign debts. It welcomes the ongoing dialogue on collective action clauses

in the Group of 10 and other forums with private creditors and emerging market sovereign issuers. Going forward, the Committee encourages the official community, the private sector, and sovereign debt issuers to continue working together to develop collective action clauses and to promote their early inclusion in international sovereign bond issues; in that regard, it welcomes the recent decision by many countries to include collective action clauses. The Committee also calls on the IMF to consider the issues further and to develop, for consideration at its next meeting, a concrete proposal for a statutory sovereign debt restructuring mechanism to be considered by the membership.

The HIPC Initiative has the flexibility to provide additional debt relief at the completion point to help countries that have suffered a fundamental change in their economic circumstances due to exceptional exogenous shocks.

The Committee supports the IMF’s continuing role in helping poor countries address the challenge of meeting the Millennium Development Goals by supporting economic reforms aimed at accelerating growth and reducing poverty. It welcomes the increased momentum in countries’ efforts to develop and implement their poverty reduction strategy papers (PRSPs) and the IMF’s and donors’ efforts to align their support more closely with PRSPs. It recognizes that there may be a need to consider mobilizing new Poverty Reduction and Growth Facility (PRGF) resources if high demand for PRGF financing continues. The Committee stresses the importance of sound macroeconomic frameworks that can respond flexibly to changes in the external environment; identifying ways to encourage higher and sustainable growth; good governance; improving public expenditure and financial management systems; and using poverty and social impact analysis more systematically and building country capacity in this area. The Committee encourages the IMF and the Bank to continue their collaboration on these issues and looks forward to reviewing progress. Furthermore, it looks forward to considering the results of the IMF’s work to better meet the diverse needs of its low-income members, including those stemming from disruptive exogenous shocks and emergence from conflict.

The Committee welcomes the progress made on the Heavily Indebted Poor Countries (HIPC) Initiative, allowing countries to benefit from lower debt servicing and higher social spending. It recognizes that significant challenges remain to ensure that countries achieve a lasting exit from unsustainable debt. The Committee reaffirms the commitment to implement the initiative and finance it fully to help countries overcome the burden of unsustainable debt, and underscores that the HIPC Initiative has the flexibility to provide additional debt relief at the completion point to help countries that have suffered a fundamental change in their economic circumstances due to exceptional exogenous shocks. These elements, together with sustained commitment to sound economic policies—including efforts to improve resilience to external shocks, manage debt prudently, and reinforce good governance—and new financing on appropriately concessional terms, should provide a basis for long-term sustainability. The Committee notes that the financing shortfall in the HIPC Trust Fund could be up to $1 billion and welcomes the recent pledges of support. It calls on other governments to make firm pledges and contributions as a matter of urgency. Furthermore, it urges all official and commercial creditors that have not yet done so to fully participate in the HIPC Initiative. The Committee acknowledges that the issues of HIPC-to-HIPC debt relief and creditor litigation raise serious issues that should be addressed.

The Committee welcomes the actions taken by many countries to combat money laundering and the financing of terrorism, in response to the action plan agreed to in Ottawa last year, and urges countries that have not fully responded to do so urgently. It also urges rapid progress on the exchange of information between authorities. The Committee commends the substantial progress made by the IMF, in close collaboration with the Bank, in advancing the action plan. It endorses the conditional addition of the Financial Action Task Force recommendations to the list of standards and codes for which Reports on the Observance of Standards and Codes (ROSCs) are prepared and looks forward to the final adoption of the methodology and an early start of the 12-month pilot program of assessments and accompanying ROSCs. The Committee encourages countries to make available additional experts and resources for the IMF-World Bank pilot program, welcomes the pledges made so far, and urges the IMF and the World Bank to coordinate closely with the strong international and bilateral efforts to provide critically important technical assistance. The Committee looks forward to an interim report at its next meeting and a full report at the conclusion of the pilot program.

The Committee welcomes the adoption by the IMF’s Executive Board of new guidelines on conditionality, thus bringing to a successful conclusion the review of conditionality initiated by the Managing Director two years ago. The consistent implementation of these guidelines will help enhance the effectiveness of IMF-supported programs by fostering national ownership and streamlining conditionality, focusing it on elements critical to the success of members’ economic programs. The Committee stresses that strengthened collaboration with the World Bank is an integral part of these efforts to enable both institutions to provide complementary and effective support.

The Committee stresses the importance of the IMF having adequate resources to fulfill its financial responsibilities. Quotas should reflect developments in the international economy. The Committee notes that the Executive Board is continuing its consideration of the Twelfth General Review of Quotas and will present its report to the Board of Governors by January 2003. It recommends an early implementation of the Fourth Amendment.

The Committee welcomes the first report of the Independent Evaluation Office, “Prolonged Use of Fund Resources,” to the Executive Board. It welcomes the establishment by IMF management of an internal task force to propose steps to carry forward the report’s recommendations, as appropriate. 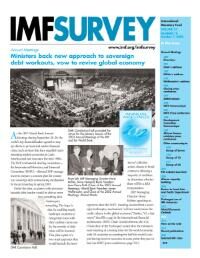