Whither Japan? That question may not be fully answered until there is a clearer understanding of what prompted the country’s extended slow-down. In a recent IMF Institute seminar, Edward Prescott, professor of economics at the University of Minnesota, presented research undertaken with Fumio Hayashi of the University of Tokyo. They find that the decline in Japan’s economic growth rate is explained almost entirely by a decline in the rate of productivity growth. Jahangir Aziz, a Deputy Division Chief in the IMF’s Asia and Pacific Department, spoke with Professor Prescott about these findings and his thoughts on the U.S. economy.

Whither Japan? That question may not be fully answered until there is a clearer understanding of what prompted the country’s extended slow-down. In a recent IMF Institute seminar, Edward Prescott, professor of economics at the University of Minnesota, presented research undertaken with Fumio Hayashi of the University of Tokyo. They find that the decline in Japan’s economic growth rate is explained almost entirely by a decline in the rate of productivity growth. Jahangir Aziz, a Deputy Division Chief in the IMF’s Asia and Pacific Department, spoke with Professor Prescott about these findings and his thoughts on the U.S. economy.

Most analysts see the collapse of the asset price bubble, difficulties in the banking system, and poor policies as central to the reasons why Japan experienced an economic slowdown in the 1990s. But you don’t agree; why is that?

Prescott: Fumio Hayashi and I found that if productivity growth is treated as exogenous, the Japanese economy behaved just as neoclassical growth theory predicts. This is why I say the sharp decline in Japan’s productivity growth in the 1990s accounts for its economic slowdown. The preferences of the Japanese people for work and leisure and their participation in the workforce are the same as in France or the United States; their saving behavior is the same, too.

So why has total factor productivity growth declined? Why did productivity growth, after increasing quite rapidly between 1984 and 1991, drop to almost zero subsequently? I would argue that it is not a matter of stabilization policy or the lack thereof. I think it’s got to be related to a multitude of factors. One problem may be with the financial system—with savings being directed in a way that subsidizes inefficient producers. I suspect that the Japanese government does not want its banks to fail; their failure would be very embarrassing to the Japanese government. This is why inefficient producers are being sub-sidized and protected from competition. This may not be the case, but this area bears careful investigation.

Why did Japan’s productivity decline during the 1990s? It isn’t a period one typically associates with productivity slowdowns.

Prescott: First, it’s not exactly a productivity decline. There was a decline in the rate at which productivity grew. Rather than growing at 2 percent a year, the productivity growth rate fell to slightly above zero—about 3/10 of 1 percent. Why in Japan and not in North America or Western Europe? The question is a very good one, and that’s where we should focus our research attention.

One difference could be that Japan experienced a major financial crisis, while the United States had only a very minor one. Western Europe, except for a couple of Scandinavian countries, avoided a financial crisis. Another difference could be greater competition in both North America and Europe. An industry in France competes with the same industry in Spain, Italy, the United Kingdom, or Germany. An industry in California competes with the same industry in Canada, Mexico, or New York. You don’t see that competition so much within Japan. The Japanese industries that do face global competition are highly efficient. The Japanese automobile industry is the most efficient automobile industry in the world.

Your paper contrasts Japan and France, both of which have per capita incomes that are 30 percent less than in the United States today.

Prescott: Today the French work 30 percent less than do Americans. In the 1970s, the French worked 10 percent more than U.S. workers did. They have more holidays and more weeks of vacation, and a lower percentage of their working-age population that work. There’s a nice connection here between policy and why this happened.

The intratemporal tax wedge in France is large. In France, if someone works more and produces 1.0 additional unit of output, that person gets to keep less than 0.4 unit of that additional output he or she produced. The rest is taxed away. In the United States, the person would keep 0.6 unit of the additional output. Taking into consideration consumption taxes and social security taxes as well as income taxes, the French marginal tax rate is 60 percent. In the United States it is only 40 percent. This is why the French work 30 percent less than Americans.

If France adopted the U.S. tax system, France would collect as much revenue as it currently does and would realize a welfare benefit equivalent to consuming 20 percent more now and in all future periods. More precisely, the increase in welfare that would result from this change in the tax system would be as great as a tax-free gift that started at $5,000 a year and grew at 2 percent a year. I want to emphasize that this is a real gift—that is, one corrected for inflation. This welfare gain is a big number.

Even more striking, if Japan’s productivity were to suddenly increase to the U.S. level, the Japanese people would be better off by 40 percent of consumption. In other words, the welfare gap with the United States is twice as big for Japan as it is for France. A danger is that Japan will adopt a tax system like France in the hope of financing benefits that it promised to its citizens. If it does this, the Japanese economy will become 30 percent more depressed and revenue collections will not increase.

Given your finding that a decline in productivity growth is the main cause for the slowdown in Japan, what do you recommend?

Prescott: I would look to the United States, which had very low productivity growth in the 1970s but then, in the late 1970s and the early 1980s, undertook significant reforms that led to a recovery in productivity growth. What were these reforms? There was quite a range: from deregulation in various sectors—banking, airlines, telecommunications—to the way pollution was controlled. Government policies were subject to cost-benefit analyses, and such analyses sometimes resulted in not adopting policies that had bad consequences for productivity and few benefits.

It is important to note that the reforms featured market rather than command mechanisms. There are all kinds of moral hazard problems associated with command mechanisms. For example, in the case of pollution controls, command mechanisms do not give parties the incentive to honestly report the costs of reducing pollution. Sulfur dioxide was a dramatic example. The cost of reducing pollution from sulfur dioxide under market mechanisms turned out to be a small fraction of what it would have been under a command-type system. I don’t have a detailed knowledge of Japan’s regulatory environment, but I suspect that it is command-based rather than market-based. A command-based regulatory system is often used to protect industry insiders with vested interests in producing inefficiently.

Foreign competition is also important. Japan is beginning to permit some competition from foreign financial institutions. There are a number of U.S. financial institutions with offices in Tokyo, for example. More of this is the way to proceed, I think, but basically the Japanese people have to figure out what to do. They know what reforms are acceptable and at what pace. Outsiders cannot tell them what to do; that never works. I’ve been going to Japan over the past five years, and over this time, I’ve noticed a shift in the thinking. The Japanese are much more sympathetic to the view that reforms are needed to restore productivity growth and that productivity growth must be restored.

During these past five years, have you seen studies like yours and others have a greater influence on Japan’s public policy?

Prescott: Well, you just give a little bit of moral support to the people who are thinking about these problems, and that’s important. Some of the IMF’s work has helped influence this policy debate, too, but then again, the IMF can’t go in there and reform Japan either. But Japan will reform; I’m sure of that. The only question is when.

Your work on the United States found that productivity shocks explain most of the cyclical fluctuations the economy has experienced. Does this finding have any bearing on the nature of public policy?

Prescott: These productivity shocks between 1954 and about 1980 accounted for about 70 percent of the cyclical fluctuations, which is a big number. An implication of this finding is that the economy responds in the best possible way to technology shocks, so stabilization policy can at best have no effect and at worse a negative effect on the economic welfare of people. Consistently, productivity comes up as the most important determinant of differences in living standards.

Tax factors are also very important, as evidenced by how little the French now work on a per capita basis. In the 1970s, their marginal tax rate was lower and as a result, they worked 10 percent more than Americans did at that time. In the 1980s, the United States saw a large increase in its labor supply. It appeared to be related to changes in the tax system that lowered marginal tax rates and broadened the tax base. With regard to tax policy reform, you should just think of what tax system best balances efficiency and distributional considerations. You should not be using tax policy to stabilize the economy. That’s the key point.

I hope Japan changes its policy—and I’m using that word in a very general sense as “the rules of the game.” Policy is a game, and with a better policy game, productivity growth will again be rapid and the Japanese economy will again boom.

What do you think about the U.S. policy response to its current, or now perhaps just concluded, recession?

Prescott: First, it was quite clear to me that lowering the interest rate would not make the economy boom. Second, I think the economy is in pretty good shape. It’s neither prosperous nor depressed right now. It’s very close to trend. It had been above trend. Why? The Y2K problem led to the purchase of a lot of computers and software in 1998 and 1999 and fewer purchases in 2000 and 2001. There was also a telecommunications boom that led to a huge investment in fiber-optic systems in the late 1990s.

In my way of determining recessions and expansions, I detrend the time series using a 2 percent annual trend. This is the average rate at which per capita output grew throughout the twentieth century in the United States. I see this trend growth as being due to the accumulation of knowledge useful in production. If you detrend in this way, you find the economy peaked right at the beginning of 2000 and then the recession started. This is one year earlier than the National Bureau of Economic Research’s estimate, which ignores population growth and assumes a zero trend. I would say we’re roughly back to normal, or right on trend. I was very pleased to see the recent productivity report. It was good to see the number come in so big; a few more big productivity growth numbers and the economy will be booming. If, however, productivity growth falls well below trend, as has happened in Japan, then I would get worried. Until then, I remain optimistic.

There have been very modest cuts in tax rates, and they will boost the economy some. But, when I did some rough calculations, their consequences are small. 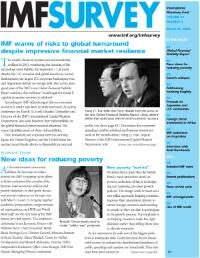