Asia was not immune to the effects of the recent global economic slowdown, but there are some indications that the region’s emerging market economies are beginning to recover. In a speech to the Eleventh Asia Business Conference at the Harvard Business School on February 2, Wanda S. Tseng, Deputy Director of the IMF’s Asia and Pacific Department, said that these countries now need to move forcefully on the unfinished structural reform agenda—particularly in the banking and corporate sectors—to ensure sustained growth and resilience against external shocks. She focused on the progress Asian countries have made to date in financial sector and corporate restructuring. But what more needs to be done to cement the progress already made? Following is an edited version of her remarks.

Asia was not immune to the effects of the recent global economic slowdown, but there are some indications that the region’s emerging market economies are beginning to recover. In a speech to the Eleventh Asia Business Conference at the Harvard Business School on February 2, Wanda S. Tseng, Deputy Director of the IMF’s Asia and Pacific Department, said that these countries now need to move forcefully on the unfinished structural reform agenda—particularly in the banking and corporate sectors—to ensure sustained growth and resilience against external shocks. She focused on the progress Asian countries have made to date in financial sector and corporate restructuring. But what more needs to be done to cement the progress already made? Following is an edited version of her remarks.

Asia’s recovery from the financial crises of 1997-98 was interrupted last year by serious external shocks, notably the collapse of the technology bubble and the terrorist attacks in the United States on September 11. However, the effects of these shocks appear to be receding, and signs of a recovery are beginning to emerge. The key uncertainty in the outlook for much of Asia is the strength of export demand, especially the pace of the global recovery in corporate investment in information technology. Judging by recent indicators, the sharp export decline may have bottomed out. Exports are now rising again in some countries. Nonetheless, countries in Asia cannot rely on external demand alone. They need to implement policies that would position their economies for a faster takeoff and sustained growth.

In response to the slowdown, macro-economic policies across the region have generally been eased. Most countries have lowered official interest rates since September 11, continuing the trend established before this date, and the weakening of most regional currencies (apart from those with fixed pegs) has also contributed to an easing of monetary conditions. On the fiscal policy front, the scope for adjustment varies considerably. Following widespread easing of fiscal policy earlier last year, some economies, including Hong Kong SAR, Malaysia, and Singapore, have announced supplementary budgets. But high public debt, or deficit in some cases—particularly in Indonesia, the Philippines, and India—greatly constrains the scope for further fiscal support.

But perhaps even more important for the Asian crisis countries is the need to tackle the unfinished structural reform agenda. If we look back for a moment at the Asian financial crisis, one lesson we can draw is that sound macroeconomic fundamentals must be accompanied by sound structural fundamentals to ensure sustained rapid growth and resilience against external shocks. While Asian countries, for the most part, had pursued prudent macro-economic policies, the core of the problem was the absence of a strong institutional framework to impose market discipline. It became apparent that the institutions that provide checks and balances in a market economy—a sound and well-supervised banking system, a corporate governance structure, and a legal and judicial system—were weak or lacking in Asia. In many countries, the institutional weaknesses allowed severe balance sheet problems to develop and fester, triggering a breakdown of the corporate and banking sectors.

Over the past four years, the recovery strategy in the region has focused on rebuilding the banking system and deleveraging the corporate sector. Let me briefly review the progress that has been made in the crisis countries.

Bankingsector. There has been significant consolidation in the banking system. The number of banks has declined in all countries surveyed, most dramatically in Indonesia, where the total has fallen from 240 in 1997 to 146 in 2001. Bank ownership structures have also changed markedly. In all countries, foreign bank ownership has increased; in some, foreign banks have entered for the first time. But this change has not been as significant as originally expected. Instead, it is the state that has expanded its market share, quite significantly. And, while some of this expansion has been rolled back over the past few years, the decline has been slow and small. In Thailand, for example, the government still owns about one-third of bank assets, almost unchanged from 1998, while in Indonesia the government controls nearly three-fourths of bank assets.

Banks have also been repairing their balance sheets. Average capital adequacy ratios—measured by governments and tending to be overstated—now exceed 10 percent, and headline nonperforming loan ratios have been falling. In Thailand, for example, reported nonperforming loans have fallen from a high of nearly 50 percent during the crisis to 13 percent at present, although this decline largely reflects the transfer of assets to asset management companies.

There are clear signs of progress in financial sector restructuring, but a number of indicators suggest that further efforts are necessary to cement the progress already made. To begin with, bank profitability remains weak. There has been some recovery in profits before provisions, but they remain low by any standard. In Thailand and Korea, for example, profits before provisions as a percent of total assets turned positive in 2001, but only marginally so. Also, banks are not yet performing their intermediary function, as lending remains subdued. This may reflect, in part, the lack of good credit or investment opportunities, but it may also reflect a limited capacity on the part of the banks to lend, given their still-difficult financial positions. Unsurprisingly, given these difficulties, bank share prices remain relatively low. Investors remain concerned about low profits, unrecognized loan losses, inadequate collateral, and a potential deterioration in loan performance, because borrowers remain vulnerable.

Given these problems, what are the reform priorities for banks going forward?

• Second, banks’ capital bases need to be augmented further in some countries to allow them to deal more easily with the remaining nonperforming loans and to improve profitability.

• Third, prudential regulations must be enforced. Regulators must avoid succumbing to the pressures of regulatory forbearance that hide the true magnitude of the problem.

• Fourth, banks should be returned to the private sector. Reprivatizing the banks is an excellent way to achieve the first two objectives—operational restructuring and recapitalization—without burdening public finances. Sound and privately led banks are also indispensable for a truly market-driven approach to working out the remaining impaired assets.

• Fifth, further progress in corporate restructuring needs to be made. In some countries, such as the Philippines, this is necessary because many of the bad loans are still in the banks, rather than in asset management companies. In other countries, where loans have been transferred, it is still important because banks, in the end, can be only as healthy as their clients.

Corporatesector. A number of indicators suggest that corporate sector restructuring has been slow and incomplete, with the debt overhang still high. The stock of impaired assets—that is, nonperforming loans plus loans transferred to asset management companies—remains sizable (see chart, top panel). In Thailand, for example, the ratio held steady at nearly 40 percent of loans in 2001. In Indonesia, the ratio is over 50 percent. Corporate leverage also remains high (see chart, bottom panel). In Korea, where the average debt-equity ratio has been halved since 1997, the ratio nonetheless remains at about 200 percent. Corporate debt today is much the same as it was in 1997. Indeed, in Malaysia and Indonesia, corporate debt as a percent of GDP actually rose in 2001, and, in Indonesia, is even higher than precrisis levels.

So what can and should be done? Clearly, legal frameworks need improving to speed resolution and strengthen the rights of creditors. In Korea, the authorities are planning another major reform, which should include a provision to authorize court approval of majority-approved restructuring plans even when there are some dissenting creditors—often the shareholders of these enterprises.

In Thailand, bankruptcy criteria need to be clarified, so that debtors can be declared insolvent based on straightforward cash-flow tests of their ability to meet debt-service obligations, rather than on subjective assessments of their net worth.

In most countries, judicial systems need streamlining. Court processes and foreclosure procedures need expediting, so that countries can clear away the existing judicial backlogs, which in some cases amount to several years. Bank supervisory frameworks also need to be reinforced. Regulators need to insist that banks remedy their deficiencies in assessing asset quality, and they should press creditors to acknowledge the true health of debtors. As long as firms’ problems are denied, they will certainly not be remedied. Finally, corporate governance, shareholder rights, and disclosure requirements need to be strengthened. Such reforms will allow markets to exercise greater discipline on the region’s firms to ensure that they are not taking on excessive risk and are acting in the best financial interest of all owners and creditors.

Despite the current slowdown, protectionist pressures are being held at bay in Asia and elsewhere.

Otherreforms. In addition to the financial and corporate sector reforms, there are additional areas for reforms that require attention. The first is trade liberalization. It is heartening that, despite the current slowdown, protectionist pressures are being held at bay in Asia and elsewhere. Encouragingly, there is a political will to move forward on trade lib-eralization—as evidenced by the Doha agreement—which will have a major impact on long-term growth. Second, Asia’s emerging market economies can also go further in the direction of facilitating foreign direct investment inflows.A particular priority would be to remove restrictions that limit or prohibit foreign ownership in selected sectors. The third area is export diversification. The current slowdown highlights the risks of overspecialization in information technology products as primary exports and undue reliance on the United States as the main export market. Finally, social safety nets need to be strengthened. Looking back, as Asian countries generally enjoyed high growth rates and low unemployment for most of the period after World War II, an effective social safety net was neglected. Adequate social protection is not only necessary to maintain fairness and human dignity, but it also allows needed structural reforms to proceed without causing social hardships that can lead to social disturbances and instability.

While the global economy remains subdued and the outlook uncertain, there are reasons for cautious optimism. The countries that will emerge ahead will be those that position themselves to benefit from the recovery. This requires supportive macro-economic policies, perseverance with corporate and financial sector reforms, openness to trade and investment, and stronger social safety nets. 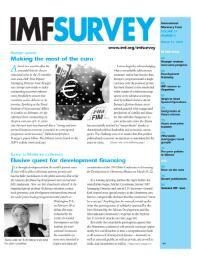 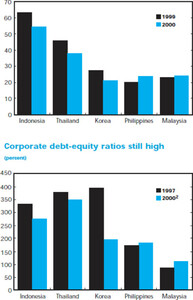