Next year in Johannesburg, world leaders will revisit the issues raised at the 1992 Rio Earth Summit on sustainable development and the protection of the environment. For more than a decade, IMF staff have been looking at the links between the environment and the macroeconomy. Michael Keen and Muthukumara Mani, Advisor and Economist, respectively, in the IMF’s Fiscal Affairs Department and the current environmental team, explain why they are looking at the impact of climate change and resource depletion and how they are preparing for the Rio+10 Summit.

Next year in Johannesburg, world leaders will revisit the issues raised at the 1992 Rio Earth Summit on sustainable development and the protection of the environment. For more than a decade, IMF staff have been looking at the links between the environment and the macroeconomy. Michael Keen and Muthukumara Mani, Advisor and Economist, respectively, in the IMF’s Fiscal Affairs Department and the current environmental team, explain why they are looking at the impact of climate change and resource depletion and how they are preparing for the Rio+10 Summit.

Mani: Environmental factors can affect macroeconomic performance, and macroeconomic policies can affect the environment.A country that has not dealt appropriately, and quickly, with serious environmental degradation, for example, risks harming its economic performance and growth. Degrading natural resources at an unsustainable rate can jeopardize export prospects, posing problems for the trade balance. Severe air and water pollution can drive up public health expenditures, with ramifications for the fiscal position. And tourism can suffer major setbacks from, say, coastal erosion.

When a United Nations commission in the late 1980s concluded that development strategies could indeed conflict with environmental sustainability, a number of international organizations, including the IMF, began looking at these linkages in greater detail. In the IMF, we took steps to increase staff awareness of environmental issues and the research being done outside the IMF.

We do not deal with environmental issues as directly as, say, the World Bank. The Bank’s project loans can often have a direct impact on the environment and thus require environmental assessments. The IMF set up its environmental team chiefly to act as a resource for the rest of the organization.

Keen: It may seem paradoxical that a crisis-oriented organization like the IMF should be thinking about a seemingly long-term issue like climate change, but we are already dealing with the impact of what may be a key aspect of climate change—an apparent increase in the frequency and the severity of weather events. Hurricanes, typhoons, floods, and droughts have posed major problems for some of our member countries. If these events are indeed becoming more frequent or more severe, we are not talking about distant or abstract considerations.

One element of our work is to think through what the macroeconomic implications of climate change might be. More frequent, and more destructive, weather events can shape the advice we provide to our member countries and could have an impact on our lending programs. We are planning to look at a Hurricane Mitch type of event and ask what policy instruments can be designed to allow countries to mitigate the impact of such disasters.

We want to look at the market failures that arise in connection with extreme weather events and ask whether the IMF has any role to play in this aspect of crisis prevention and management. Presumably, there are insurance market failures here, but it’s not clear that we should simply envision an enhanced role for the IMF or any other kind of institution without addressing, for example, potential moral hazard problems.

Mani: Look at the past 10 years and countries like Honduras or Nicaragua. These economies were completely devastated by hurricanes. Their GDPs fell dramatically. If there are countries that are going to be hit more frequently, we need to take a fresh look at how they can better prepare themselves.

Keen: Climate change is also likely to have regional and cross-border implications. Current scientific projections, for example, suggest that the food supply problems of sub-Saharan Africa will worsen. These countries should be looking for ways to deal with these shortages, and the IMF should be thinking about how it can help.

Then you have a country like Bangladesh, which, largely through no fault of its own, could be facing increasingly severe flooding. There could be an awareness-raising issue that the IMF may be in a position to help address.

Mani: Almost all the developed countries—the United States is the exception—ratified the Kyoto Protocol. If they follow through on their obligations by 2012, these signatories will have to reduce their carbon emissions, put in place carbon taxes, or buy carbon rights from developing countries.

Of course, climate change may have winners as well as losers. Current scientific projections suggest that some regions of the United States and Canada, for example, may see extended growing seasons as a result of global warming.

Mani: A number of countries are degrading their resources in an unsustainable manner. In some cases, they are not pricing their resources appropriately, and in other cases these pricing problems are compounded by market, policy, and institutional failures. Countries that are pursuing IMF-supported reform programs often tackle much-needed macroeconomic measures like liberalizing trade regimes and/or devaluing exchange rates. But these steps may intensify resource degradation if the countries lack the market mechanisms to price resources properly or if their property rights regimes are inadequate.A country like Indonesia, for instance, had real issues about the optimal rate at which its timber resources should be used. That question, in turn, had long-term implications for soil degradation and other aspects of the economy. In a case like that, the IMF would like to make sure that adequate mechanisms are in place to correct for the market failures.

Keen: Our team is essentially a resource for the IMF’s area departments. We track the issues that arise in IMF consultations with member countries. Sometimes area departments approach us with a particular environmental issue, and we certainly encourage this. We have also developed a website for IMF staff. This contains country reports on environmental issues, analytic and factual material, and links to other international organizations.

NGOs [nongovernmental organizations] also contact us with environmental issues, and we raise these with area departments to see if the IMF-supported reform programs in these countries can be designed more effectively. These are complex issues, because they hinge upon the interaction between macroeconomic policy changes and various kinds of market failures. We are keen to have area departments think through these issues and can help them contact the appropriate staff at the World Bank.

Keen: IMF country economists have an awful lot on their plate already, but clearly environmental considerations can figure into the IMF’s core mandate of pursuing macroeconomic stability and sustainable growth. Our team wants to make it as easy as possible for country economists to pay a little bit more attention to aspects of the environment that may be critical for the macroeconomy. For example, perhaps more use can be made of environmental taxes to raise revenue as a part of a well-designed fiscal strategy.

Mani: The World Bank is a lead organization on environmental issues, so it is important that the IMF make good use of the Bank’s comparative advantage. The World Bank has sectoral and country-specific knowledge that can be of enormous value to the IMF’s work. Also, the Bank recently adjusted its environmental strategy. It intends to strengthen the environmental assessment of its adjustment programs and poverty reduction strategy papers. We are working closely with the Bank to see how this new methodology or framework would affect our own work.

For the Johannesburg World Summit on Sustainable Development—the “Rio+10” meeting—next year, we are working with the Bank to produce a joint document on financing for sustainable development. The paper will identify various sources for development finance and carefully examine how environmental taxes and resource fees can be used for environmental protection.

The IMF Survey (ISSN 0047-083X) is published in English, French, and Spanish by the IMF 23 times a year, plus an annual Supplement on the IMF and an annual index. Opinions and materials in the IMF Survey do not necessarily reflect official views of the IMF. Any maps used are for the convenience of readers, based on National Geographic’s Atlas of the World, Sixth Edition; the denominations used and the boundaries shown do not imply any judgment by the IMF on the legal status of any territory or any endorsement or acceptance of such boundaries. Material from the IMF Survey may be reprinted, with due credit given. Address editorial correspondence to Current Publications Division, Room IS7-1100, IMF, Washington, DC 20431 U.S.A. Tel.: (202) 623-8585; or e-mail any comments to imfsurvey@imf.org. The IMF Survey is mailed first class in Canada, Mexico, and the United States, and by airspeed elsewhere. Private firms and individuals are charged $79.00 annually. Apply for subscriptions to Publication Services, Box X2001, IMF, Washington, DC 20431 U.S.A. Tel.: (202) 623-7430; fax: (202) 623-7201; e-mail: publications@imf.org. 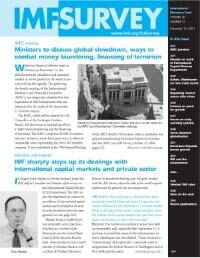