The staff report notes that as of mid-1998, Germany’s economy appeared poised for a long-awaited cyclical upswing: the massive labor market shakeout that followed German unification had finally run its course; the Maastricht fiscal requirements had been met; and external competitiveness was satisfactory. However, the cyclical upswing subsequently stalled as the emerging market crisis took a heavy toll on German exports. The ensuing knock to business confidence was exacerbated by initial uncertainty about the policy direction of the new federal government elected in September 1998. As a result, Germany’s real GDP growth came to a halt in late 1998, lagging euro-area performance by some 2 percentage points during the second half of the year, before recovering somewhat in 1999. Unemployment declined in 1998 and has recently been stable at about 9 percent (standardized definition), helped by active labor market programs and slow labor force growth. German inflation has been subdued, remaining below 1 percent as of September 1999, despite higher oil prices and indirect taxes.

With the contractionary impact of the emerging market crisis receding, Germany’s short-term growth outlook is now reasonably bright. The improved external environment, easier monetary conditions, and greater policy clarity, in particular in the fiscal area, have already been reflected in a marked strengthening of short-term indicators, including business confidence, orders, and industrial production. Staff projects real GDP growth to pick up from about 1½ percent in 1999 to 2½ percent in 2000. At the same time, however, enduring structural weaknesses in the labor market point to less-than-comforting medium-term prospects.

On the macroeconomic policy front, the federal government’s June fiscal consolidation and tax reform package has clarified the authorities’ medium-term intentions. The staff report welcomes the package’s emphasis on targeted cuts in current spending, which should lend credibility to the fiscal strategy. Moreover, the package reconfirms Germany’s commitment to the Stability and Growth Pact (signed in 1997 by European Union members, in which countries aspiring to membership in the European Economic and Monetary Union (EMU) have committed themselves to attaining a medium-term budgetary position close to balance or in surplus). If firmly implemented, the consolidation package would bring the medium-term fiscal position close to balance. At the same time, the staff report notes that the fiscal authorities should craft budgetary policies in cyclically adjusted terms and allow the operation of automatic fiscal stabilizers when growth deviates from budgetary projections—an approach that should foster macroeconomic stability and that has become particularly important in the context of EMU.

The fiscal package’s income tax reform proposals envisage substantial cuts in Germany’s high statutory business income tax rates, financed through base broadening. The staff report notes that the proposed reforms would lower the overall efficiency cost of the tax system, but would also tilt the playing field toward retention of profits rather than distributions, as the latter would be taxed at significantly higher rates. The report also argues that further steps to lower Germany’s tax burden, financed through expenditure restraint, would be desirable.

The report notes that Germany’s key labor market institutions—collective bargaining on wages and other work conditions and a large-scale social insurance system—have been premised for many years on two key principles: first, income solidarity—that is, increases in labor compensation and improvements in nonwage benefits should apply at roughly similar rates across different types of workers; and second, social contribution rates should be levied roughly proportionally across the wage distribution, and social insurance benefits should be linked tightly to contributions. Collective bargaining and the social insurance system are complemented by a generous social safety net for the long-term unemployed, based on the principle of a minimum income guarantee that in effect establishes a relatively high wage floor at the lower end of the labor market.

These institutional arrangements worked exceptionally well during the Wirtschaftswunder era of rapid catch-up growth in the 1950s and 1960s and were associated with an economic performance that was envied by much of the world. However, as the impetus behind catch-up growth and some of the special circumstances surrounding the Wirtschaftswunder era faded away, a large segment of Germany’s labor market, mainly comprising the lower-skilled and lower-paid workers, faced increasing difficulties finding gainful employment, as reflected in a striking disparity in disaggregated unemployment and employment trends by skills since the mid-1970s (see charts, page 355).

The report suggests that the unfavorable labor market trends for the unskilled reflect the interaction of marked changes in the economic environment with Germany’s long-established labor market institutions. On the labor demand side, skill-biased technological progress and globalization shifted labor demand in favor of higher-skilled and better-paid workers (the “highsiders”). On the labor supply side, immigration, new patterns of labor force participation, and, in particular, German unification added to the pool of lower-skilled and lower-paid workers (the “lowsiders”). With collective bargaining wedded to the principle of income solidarity (driven over the medium term by the productivity performance of the highsiders) and with social contributions increasing proportionally across the wage distribution, lowsiders found themselves increasingly uncompetitive. The only available wage-setting option to keep lowsiders’ labor cost in line with their productivity within this institutional framework—across-the-board wage restraint—proved unsustainable during cyclical upturns and was generally followed by episodes of across-the-board wage pushes and further rounds of labor shedding at the low end.

The problems at the lower end of the labor market were echoed by financial policy responses that added demand-side strains to an already difficult situation. In particular, fiscal policy at the federal government level, driven by a constitutionally sanctioned urge to “restore order to the public finances” following labor market shakeouts and the associated weakening of the fiscal position, adopted a pronounced procyclical fiscal stance.

The German authorities have recently convened the Alliance for Jobs among the social partners to discuss and initiate reforms to improve the functioning of Germany’s labor market. The staff report notes that this forum is a potentially promising framework for developing a cooperative solution in light of successful experiences elsewhere, including among some of Germany’s neighbors in Europe. It suggests that a broad-based package is needed both to address the problem of excessive labor cost at the lower end (through lower social contributions and greater flexibility of collective bargaining) and to enhance incentives to take up remunerated work (both through tightening eligibility for noninsurance social benefits and through income safeguards in the form of in-work benefits for the lower-paid workers). In this context, the staff report notes that alternative, narrower approaches to tackling Germany’s labor market malaise—for example, trading across-the-board wage moderation for new early retirement schemes—would, at best, have only short-lived benefits. While welcoming Germany’s progress in deregulating utilities, the report observes that further product market steps, including liberalizing shopping hours and reducing the massive number of business regulations, would be a valuable complement to labor market reforms.

The report suggests that Germany’s financial system appears to have weathered the emerging market crisis. At the same time, EMU and globalization continue to put pressure on financial institutions to become more efficient. However, consolidation is hindered by a variety of ownership structures that make mergers difficult. The report thus encourages measures that would level the playing field across Germany’s financial institutions, in particular by clarifying the role of the Landesbanken, and increase the transparency of banks’ credit risks. 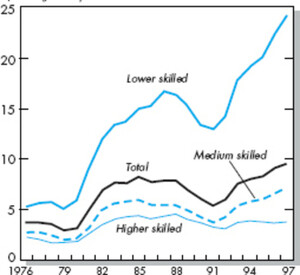 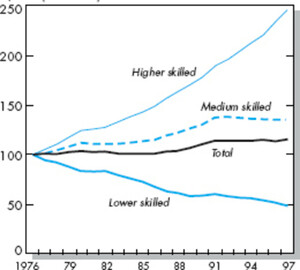