Presenting his new book, Toward a New International Financial Architecture: A Practical Post-Asia Agenda, at the Institute for International Economics (IIE) in Washington on February 25, Barry Eichengreen rejected approaches to the reform of the international monetary system that were either excessively timid or singularly unrealistic. Pointing out that measures in the former category (such as more reliance on market discipline) would not produce the necessary concrete changes, while those in the latter (a world currency) would never be enacted, he laid claim to the more sparsely populated middle ground with a limited set of pragmatic measures.

Eichengreen—Professor of Economics and Political Science at the University of California, Berkeley—noted that his reform proposals flow from his basic beliefs about the system. On the one hand, the world is right to conclude that the events in Asia constitute a prototype for future financial emergencies, providing an illustration of what happens when “high-tech” international finance collides with weak domestic financial systems. On the other hand, global capitalism is not in crisis. Rather, while greater financial liberalization offers compelling benefits—and seems in any case inevitable—financial markets are liable to overshooting, sharp corrections, and, in the extreme, crisis, because of asymmetric information and coordination problems. 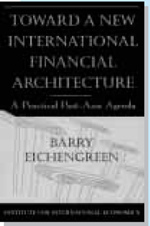 Eichengreen offers some recommendations to strengthen the international monetary system through crisis prevention, crisis management, and reform of the IMF. He posits that since stability at the international level is not possible without its counterpart at the domestic level, the international community needs to address a wide range of nitty-gritty national issues, including bank and securities market regulation, bankruptcy laws, corporate governance, data dissemination, and auditing and accounting standards. But until a country’s banking system is strengthened through adherence to internationally accepted bank standards for risk management and supervision, Eichengreen advocates the taxation of all short-term capital inflows to limit the debt buildups that can trigger financial crises.

The debate on reform has fostered a flurry of architectural metaphors.

Another recommendation, dealing with crisis management, is the promotion of orderly debt restructuring. The incorporation of new clauses into bond and bank loan contracts would be the most important step in this direction, Eichengreen said. Adding clauses that allow for majority voting, burden sharing, collective representation, nonacceleration, and minimum legal threshold provisions to bonds is the sane alternative to devastating defaults or billion-dollar bailouts.

The reform of the IMF is integral to all of these recommendations, Eichengreen said. While the private sector must take a lead role in developing new standards, the IMF would not only actively consult with these groups in developing the criteria, urge members to adopt them, and monitor compliance, but it would also offer its members both “the stick” of a frank and public assessment of their compliance with the internationally accepted standards of financial practice and “the carrot” of concessional interest rates to countries that are complying. The IMF should also encourage short-term taxes on capital inflows in countries without sufficiently strong financial systems and forcefully press for more flexible exchange rate regimes in its developing country members with open capital accounts. Finally, not only should the IMF offer the carrot of concessional interest rates to encourage members to design their international bond contracts so as to promote orderly debt restructuring, but it should also become an honest broker and helpful coordinator between debtors and creditors when financial crises inevitably do occur. Eichengreen called on the IMF “to become less of a fireman and more of a policeman.”

The debate on the reform of the international monetary system has fostered a flurry of architectural metaphors, with the current proposals ranging from interior decoration to radical renovations. Eichengreen, noting he had the perspective of someone who lives in an earthquake zone, called his recommendations “a strengthening of the foundations of the system.” He warned that there is a need for a broad consensus to emerge soon around pragmatic proposals to avoid having the crucial work on bolstering the international financial architecture run out of steam and be abandoned.

Copies of Toward a New International Financial Architecture: A Practical Post-Asia Agenda, by Barry Eichengreen, are available for $18.95 each from the Institute for International Economics, 11 Dupont Circle, NW, Washington, DC 20036. Tel: (202)857-3616.