The start of stage three of European Economic and Monetary Union (EMU)—also known as the euro area—in January 1999 ushered in major changes in the statistical systems of the euro area countries. Changes in monetary and other financial statistics included creation of the euro, the application of a single monetary policy throughout the union, and institutional and regulatory changes that fostered the further integration of the national economies. In the context of these changes, the IMF’s Statistics Department has been working closely with euro area authorities to collect statistics that are most useful in the IMF’s surveillance of the new institutional and policy environment within the euro area. A comprehensive selection of these statistics will be published for the first time in the April 1999 issue of the IMF’s International Financial Statistics (IFS).

The development of harmonized statistics for the euro area has been a joint responsibility of the Statistical Office of the European Communities (Eurostat) and the European Central Bank (ECB). Eurostat has a long tradition of defining harmonized concepts and compiling economic and social statistics for the member states of the European Union. At the same time, the Treaty on the European Union (Maastricht Treaty) requires the ECB to collect, with the assistance of the national central banks, the statistical information needed to implement the single monetary policy. Thus, the ECB assumed full competence for money and banking statistics from the start of stage three of monetary union. The ECB and Eurostat share competence in balance of payments statistics and statistics on financial flows. Government statistics, foreign trade statistics, statistics on prices and other short-term indicators, and national accounts remain the prime responsibility of Eurostat.

Working closely with the ECB and euro area national central banks, IMF staff formulated a framework for euro area monetary, exchange rate, international liquidity, and other financial statistics that reflects EMU’s unique conditions, serves the needs of the IMF in carrying out its oversight of the economies of its member countries, and informs the public. The framework links—whenever possible—to the statistics for countries outside the euro area. The country pages for euro area countries present some of these new statistics in the April 1999 issue of IFS, and a new IFSpage is introduced for the euro area as a whole.

Data for euro area in IFS 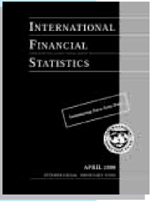 An important statistical change arising from the creation of the “Eurosystem”—the central banking system of the union, comprising the ECB and the national central banks—is denomination of data in euros. Nearly all the data on the euro area IFS page are in euros, whereas country data are denominated in euros from January 1999 onward, but data prior to January 1999 continue to be denominated in the pre-euro-era national currencies.

The criteria in the Maastricht Treaty involved a very precise and comparable measurement of government finance, inflation, national accounts, and others. The conceptual basis for this measurement has been found largely in the European system of accounts developed by Eurostat. In addition, Eurostat assumed leadership for the development of a harmonized index of consumer prices. Work on improving the comparability and timeliness of economic statistics is continuing and involves, among other things, the development of a system of short-term indicators (such as orders, output, and employment), a quarterly index of labor costs, and the harmonization of the national accounts at constant prices.