GLOBAL INEQUALITIES ARE in bad shape and mostly do not appear to be getting better. Disparities today are about the same as they were in the early 20th century, and the pandemic continues to make things worse.

The recently released World Inequality Report 2022 sheds light on this problem. With two traditional measures and two new ones, the study adds much to our knowledge of inequality.

The first two measures are of wealth and income. As the chart below shows, current disparities are extreme. The poorest half of the global population owns just €2,900 (in purchasing power parity) per adult, while the top 10 percent owns roughly 190 times as much. Income inequalities are not much better. The richest 10 percent today snap up 52 percent of all income. The poorest half get just 8.5 percent.

The two new measures in the report look at ecological and gender inequality. The first is reported through carbon dioxide emissions by income category. This is not just a matter of rich versus poor nations; there are large disparities within all countries between the most well-of and the rest. The report looks at gender inequality through a breakdown of labor incomes. Over the past 30 years women’s share of income has only slightly improved.

The authors make it clear that much can be done about inequality and that it is always a political choice, with better policy design inevitably leading to fairer development pathways. FD 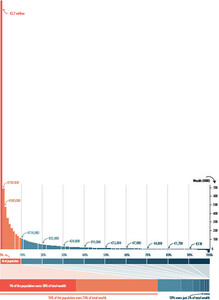 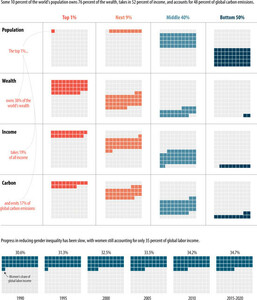