THE WEST AFRICAN NATION of Togo has drawn global attention through its innovative digital payment initiative Novissi (which means “solidarity” in the Ewe language), which has provided financial assistance to its people during the pandemic.

Cina Lawson, Togo’s minister of digital economy and transformation, has been at the forefront of harnessing technology to deliver fiscal policy and help achieve the country’s development goals. In this interview with F&D’s Adam Behsudi, Lawson describes how Togo is breaking new ground on digitalization.

F&D: Can you explain Togo’s Novissi payment program and describe its effects two years into the pandemic?

CINA LAWSON: While many countries found it difficult to identify, register, and pay millions in need due to social distancing measures, Togo managed to distribute $34 million to more than 920,000 vulnerable people—which amounts to about one-fourth of the adult population—by leveraging mobile technologies, nontraditional data sources, and machine learning.

The Novissi program came out of the urgent need not to leave anyone behind as restrictive measures were put in place to fight the spread of the virus. In Togo, more than 50 percent of the population still lives in extreme poverty, and about 80 percent works in the informal sector living on day-to-day jobs that cannot be done from home. It was imperative to support these individuals and their families and prevent a rise in the national poverty rate.

F&D: What makes Novissi unique? CL: First, it was the speed of the rollout. The program was launched April 8, 2020, only eight days after the health emergency was declared by the president. The Novissi platform was fully developed in-house, and the system was up and running in a mere 10 days. It is a 100 percent digital cash transfer program with no face-to-face contact from registration to assessment of eligibility and cash payment. Leveraging digital means throughout the process has enabled a quick rollout of social assistance during the crisis.

Second, the cash payouts were nearly instantaneous. People received cash transfers on their mobile money accounts in less than two minutes once declared eligible. Within one week after its launch, Novissi was able to disburse social assistance to about 450,000 people. This would have been difficult to achieve with traditional methods.

Third, it functions without internet. The cash transfer platform does not require an internet connection for users to enroll and receive payment. It uses low-tech mobile technologies such as USSD [unstructured supplementary service data]. So people living in an area with no internet coverage and with basic 2G telephones could register by simply dialling the USSD shortcode *855# on their mobile phone to access a special menu.

Fourth, it leverages artificial intelligence (AI), satellite imagery, cell phone metadata, and machine learning to improve the targeting of beneficiaries. This is a potential game changer for the delivery of social protection programs in countries that have limited social registries. The AI targeting approach was led by the government of Togo, with the technical support of Innovations for Poverty Action and Center for Effective Global Action researchers, and a $10 million grant from GiveDirectly to support 140,000 people.

Finally, the program is also gender sensitive, with women receiving about 15 percent more cash than men, as they are the primary keepers of households.

F&D: Togo appears to be leapfrogging even advanced economies when it comes to digitalization of government services. What makes this possible?

CL: Leapfrogging is the only way to provide African solutions to African problems. In Togo, for instance, we have created Agence Togo Digital, an agency to recruit the required skills and capabilities to lead the digital transformation of Togo, ensure that government systems are interoperable, and enhance the value of data.

With the pandemic, digital technologies are no longer perceived as an optional luxury but rather an essential element that enables people, organizations, and states to remain relevant, competitive, and efficient.

The world is now moving toward a technology-driven era. Various sources of nontraditional data are being digitally collected and used to provide insights.

This is already a reality in the private sector, where data is being used to generate consumer insights and drive growth by providing tailored customer experience and services.

For governments to follow the same path and reach the same level of sophistication in using data to drive insights and inform policies, countries should build digital public infrastructure at the national level that is inclusive, transparent, secure from cyberattack, and aligned with the regulatory frameworks in terms of data privacy.

F&D: Access to the internet and mobile services is still a challenge in many countries in the region. What is Togo doing to ensure a widespread and inclusive digital infrastructure? CL: Africa is not on the sidelines of the global digital transformation. The continent is undergoing a boom in digital development, especially with regard to mobile penetration rates, access to the internet, and acceptance of mobile payments. Togolese citizens increasingly have access to high-speed internet, thanks to the rapid expansion of 3G and 4G networks across the country. Togo’s mobile internet penetration rate reached 63 percent in 2020, compared to barely 13 percent five or six years ago.

Connectivity prices have also fallen over the same period as we continue to extend high-speed fixed and mobile internet across the country. Consequently, more of our population can now reap the benefits of the digital economy, including better communications, improved access to information online, and novel opportunities for business, including e-commerce.

F&D: What is the next big initiative for Togo digitalization? Where do you want the country to be in 10–20 years?

CL: Togo aims to become a logistics and services hub for the western region of Africa. Hence, the country has engaged in a process of profoundly transforming its economy and has placed digital technologies at the heart of its development strategy.

As a matter of fact, three-fourths of our Togolese development road map projects for 2025 have a digital component. These projects have been integrated into a national strategy—Togo Digital 2025—which aims to

F&D: How important is digitalization to the UN Sustainable Development Goals?

CL: The Sustainable Development Goals cannot be achieved without digitalization.

According to the World Bank, about 690 million people live on less than $1.90 a day. And more than 50 percent of the world’s most vulnerable people live in sub-Saharan Africa.

COVID-19, climate change—as well as the rising number of conflicts and natural disasters—pose a threat and have reversed progress in worldwide poverty alleviation.

From Togo’s Novissi experience, I strongly believe that mobile technologies, big data, machine learning, and the promotion of digital public infrastructures would enable digital aid to be rolled out in a timely and effective manner. It is our responsibility as policymakers to adopt robust ways of addressing global issues. FD 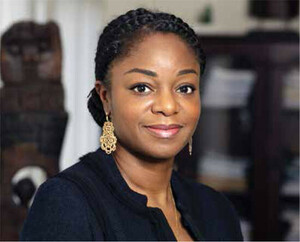