Before the global financial crisis of 2008, the general consensus was that the most important contribution fiscal policy could make to macroeconomic policy was to avoid becoming a source of instability. That is, while sound public tax and spending policies were considered fundamental to financial stability, it was monetary policy, with its focus on price stability, that would deliver the optimal level of output and employment. A contribution from fiscal policy to stabilizing the economy was not only unnecessary, it was also undesirable, because changes in fiscal policy act with such long lags, and politics can produce unsound policies.

Fiscal institutions, rules, and procedures that kept spending and taxing in sync were considered the key ingredients to ensuring sound public finances. Fiscal policy’s main role was not price stability or output stabilization but long-term sustainable and inclusive growth. Government taxes and spending were largely looked at for their effects on the allocation and distribution of resources. The bottom line: despite its limited contribution to stabilization, fiscal policy was central to macroeconomic priorities that determine the relative prosperity of nations and the well-being and capacities of successive generations.

But in 2020, in response to the COVID-19 pandemic, fiscal policy took on a crucial role in macroeconomic stabilization. As prices and demand plummeted and central banks in many advanced economies were hamstrung by interest rates that could go no lower, fiscal policy took on new importance—extending lifelines to vulnerable households and firms and limiting the impact of business shutdowns on economic activity and employment. Fiscal actions were implemented decisively and rapidly.

Fighting the effects of the pandemic, however, required a massive increase in spending that led to large budget deficits and unprecedented levels of government debt. It is remarkable that historically high levels of public debt have been accompanied by historically low interest rates and, for advanced economies, low interest cost of servicing public debt. But now, with inflation and interest rates on the rise, the issue is becoming how, and how fast, those deficits and debt levels will be reduced. There is reason to fear that the burden of policies aimed at reducing deficits and debt, such as spending cuts and tax increases, will fall predominantly on people already hit hardest by the pandemic—such as caregivers, low-wage earners, and less-qualified workers. Moreover, in many countries, there is also concern that premature austerity could jeopardize economic recovery.

The United States provides an important example of the beneficial power of an activist fiscal policy. US poverty actually fell in 2020, the first year of the COVID-19 pandemic, because of a massive widening of the social safety net. The US Census Bureau’s Supplemental Poverty Measure rate— which, in contrast to the official poverty rate, takes into account government assistance to families and individuals—was 9.1 percent of the population in 2020, 2.6 percentage points lower than in 2019. This is all the more remarkable because the official poverty rate increased 1.0 percentage point to 11.4 percent (an increase of 3.3 million people). The expansion of the US social safety net (which includes support checks and increased unemployment benefits) more than compensated for wages and jobs lost during the first year of the pandemic. The government has a special role in protecting the vulnerable when things go wrong, and 2020 demonstrated its power to do so. The United States is not the only case: poverty also fell in 2020 in other countries, such as Brazil. Poverty and inequality are fundamentally influenced by political choices.

In times of crisis, fiscal politics dominates the public sphere, as it has during the pandemic. But another important phenomenon during the COVID-19 emergency is the interaction of monetary and fiscal policies when monetary policy is constrained by an effective lower bound on nominal interest rates. Manipulating interest rates is the primary way monetary policy operates. In the United States, the euro area, and Japan, estimates of the neutral real interest rate—the rate that supports the economy at full potential while keeping inflation in check—have been declining significantly in recent decades. A falling neutral rate implies that the effective lower bound will increasingly constrain central banks’ ability to lower interest rates to offset falling demand, which leads to declines in both economic activity and employment and to an inflation rate that is below target.

The power of fiscal policy is greatest when it is needed the most.

In 2020 interest rates fell to near zero, but they could not revive an economy in free fall during the pandemic. That resulted in monetary policy ramping up the use of unorthodox techniques such as forward guidance—committing to low interest rates for a long period—and asset purchases to prop up demand and prices. But even as monetary policy’s ability to influence the economy was constrained, fiscal policy space increased. Governments cut taxes and directed resources to households and businesses to offset the effects of the pandemic— which included lockdowns, massive job losses, and a decline in demand that threatened severe disinflation. Fiscal policy became instrumental in stabilizing expectations and supported monetary policy’s aim of delivering price stability in a timely way. The power of fiscal policy is greatest when it is needed the most.

In 1923 John Maynard Keynes—the progenitor of the eponymous Keynesian economics, which spawned monetary and fiscal policies—warned in A Tract on Monetary Reform that “what Government spends the public pays for. There is no such a thing as an uncovered deficit.” This observation reflects the inescapable reality of governments’ budget constraints. An important activity of the IMF, enshrined in its Articles of Agreement, is to make resources available to member countries to facilitate their ability to correct imbalances—such as a sudden stop in external financing, unsustainable public finances, or a banking crisis—without resorting to drastic measures that destroy national and international prosperity. The availability of IMF resources is meant to build confidence during crises—when countries have lost, or are at risk of losing, their ability to borrow in open markets. Still, under these circumstances, budgetary adjustment is unavoidable and must be compatible with available financing, which is typically scarcest when and where it is most needed.

During 2020, advanced economies and China contributed more than 90 percent to the accumulation of public and nonfinancial private debt. The remaining countries accounted for only about 7 percent. The advanced economies and China are projected to return to the pre-COVID growth path over the next one to three years. In contrast, developing economies are expected to fall below the growth prospects projected before the pandemic, because they were severely constrained in their ability to respond. Reduced growth prospects and persistent declines in tax revenues are major concerns for the eradication of poverty and, more generally, for the attainment of the Sustainable Development Goals (SDGs) agreed to by 190 countries in 2015. Those 17 goals aim to result in a world in which extreme poverty is eliminated and opportunities and capacities expand for all. Financing and revenue mobilization are key enablers of the SDGs. The international community provided critical support in 2020 and 2021. But more is urgently needed. FD

VIT0R GASPAR is director of the IMF’s Fiscal Affairs Department. 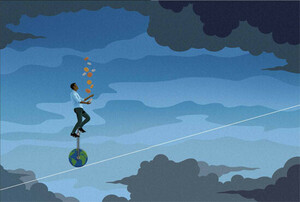