Bitcoin mining—the process of creating new bitcoins and updating the digital ledger that tracks transactions—consumes vast amounts of computing power and electricity. To earn bitcoins, miners solve increasingly difficult puzzles. The faster and more efficiently they do so, the more bitcoins they get and the harder it becomes to mine new ones. This is “what drives Bitcoin’s status as a store of value—the fact that it is so hard to mine,” says Fahad Khan, an economist at the Asian Development Bank.

It’s also what gives bitcoin mining an outsize role in climate change. Cambridge University’s Bitcoin Electricity Consumption Index calculates that miners burn about 73 terawatt-hours of electricity a year—double Denmark’s usage (see chart). The frenetic computing by hundreds of thousands of bitcoin miners spews more than 64 million tons of carbon dioxide into the atmosphere annually—a carbon footprint comparable to that of Montenegro, estimates Alex de Vries, an economist at the Netherlands’ central bank. A single bitcoin transaction may emit as much carbon as more than 1.8 million Visa purchases.

Cryptocurrencies can be dramatically cleaner, says de Vries, who is also the founder of Digiconomist, an online platform focusing on the unintended consequences of digital trends. Making a fundamental but feasible change in how blocks are created could all but eliminate the power drain of cryptocurrencies. While the change may not be universally adopted, the idea has promise. Bitcoin rival Ethereum—the second-largest cryptocurrency by market capitalization—plans to go in this direction.

The Bitcoin Mining Council—a network of independent miners—maintains that as much as two-thirds of miners’ energy use already comes from sustainable sources. It attributes that figure to a survey in which just 32 percent of the network participated.

“It’s not clear at all what’s included in their survey,” de Vries says. “Countries just don’t have the capacity to supply renewable energy for mining.” Miners “have no incentive to care about clean energy” and will flock to wherever electricity is cheapest and supply is stable, he says.

In October, more than 65 percent of bitcoin miners were based in China, where they could use hydroelectricity in the summer but mostly drew on the country’s coal-fired power stations or ran their own generators on diesel or heavy fuel oil. Now that there is a government clampdown, many miners are relocating to countries like Iran and Kazakhstan, where electricity comes almost entirely from fossil fuels.

Validators are rewarded with cryptocurrency in proportion to the stake they’ve put down. If they attest to a block with false transaction or data history, they lose their stake. Validators are selected at random, so they’re not competing and don’t need as much computing power.

“It’s just a matter of having a device with an internet connection,” de Vries says. “Tat’s why people say you can reduce the energy consumption by around 99.95 percent.”

Several high-profile blockchains, such as Cardano, EOS, Polkadot, and Tezos, use some form of proof of stake. But their market shares are relatively small compared with those of Bitcoin and Ethereum. Tat’s why Ethereum’s move to proof of stake is a big deal. If successful, the move could encourage others to follow, reducing crypto’s carbon footprint.

The shift will not be easy. Designing a proof-of-stake blockchain that is scalable and preserves security and decentralization—two of cryptocurrency’s seminal principles—is nearly impossible.

“You can’t have the most perfect outcomes for all three characteristics,” the Asian Development Bank’s Khan says. “At best you can have two. You can’t have one cryptocurrency that solves everything.”

Will Bitcoin make the shift? “I don’t think proof of work is going away” Khan says.

A single bitcoin transaction may emit as much carbon as more than 1.8 million Visa purchases.

“The use case of Bitcoin is very different from Ethereum,” says John Kif, a former financial sector expert at the IMF. “Bitcoin really does hope one day to be a unit of account or money of some sort, but Ethereum doesn’t aspire to that.” Ethereum’s goal is ultimately to replace internet third parties, such as Facebook and Google, with decentralized applications and contracts that use its ether currency.

Bitcoin is largely where cryptocurrency’s energy consumption problem lies, and a Bitcoin shift to proof of stake is improbable. But the supply of bitcoins is finite—only 21 million can ever be in circulation. At some point, the mining will stop. The future may thus turn a little greener. FD

ANALISA R. BALA is on the staff of Finance & Development. 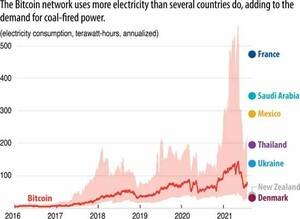 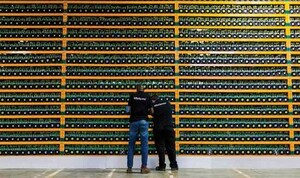