Young people are calling for action on the climate crisis, and the world is taking notice. Thanks to the internet, youth protestors are organizing across continents like no generation before them. As leaders prepare to meet in Glasgow, F&D asked a few prominent youth climate activists the single most important message they have for policymakers at the COP26 summit. Here’s what they said.

IF THERE IS ONE THING we learned from the pandemic, it’s that nature is in charge. Yet we continue to destroy our fragile ecosystems and our climate at a horrific rate. COVID-19 should serve as a warning to the world.

The climate crisis is speeding up. The evidence is everywhere—from massive floods this summer in Nigeria, Uganda, China, and Western Europe, to the raging wildfires and fierce heat waves in North America and Turkey.

Above all, though, the climate crisis is having the greatest impact on those places that have contributed the least to global emissions. Madagascar’s 28 million people produce less carbon than a Western city the size of Cincinnati, yet they face a historic drought and famine, resulting in large part from the emissions of the world’s biggest polluters.

Here in Africa, electricity demand is likely to double by 2030. We need to meet these demands with clean energy. At the same time, we also need to bear the costs of adapting to the impact of climate change with limited resources.

We can talk about small fixes and incremental solutions. But, as has been made clear many times before, we need to immediately stop digging and burning fossil fuels to meet the climate thresholds for a stable world. Even the International Energy Agency says this now. Most of the fossil fuels currently sitting in reserves need to remain unburned for us to have a chance of keeping below even 2°C. In case you need a reminder, 2°C of warming would be a death sentence for countries like mine.

Massively scaled solutions are required across all aspects of society for this change. Subsidies, development finance and private finance must stop funding fossil fuel infrastructure now. Anything less is inexcusable. Huge public and private investment must instead go into scaling renewable energy around the world. On top of this, all sorts of solutions need to be used and funded, and they don’t always involve technology. For example, Project Drawdown lists educating girls and family planning as the fifth most impactful global climate solution to keep temperatures under 1.5°C of warming.

Let us not sleepwalk into another global crisis. We can either cling to our reliance on fossil fuels, or we can take this opportunity to save ourselves from an uninhabitable future. We cannot eat coal, drink oil, or breathe so-called “natural” gas.

VANESSA NAKATE is a climate activist from Uganda.

AS A YOUNG PERSON from Moldova, arguably Europe’s most vulnerable country to climate change, I am waiting for COP26 to deliver a comprehensive and sustainable solution when it comes to financing green transitions in places least equipped to do so.

Since 2009, the climate finance target of $100 billion a year stands as a reminder of the broken promises, lack of visionary leadership, and absence of political will, which has direct costs in lost natural, human, financial, and other forms of capital in the least privileged countries. As a young economist, I urge all leaders to take into account the fact that, in this battle where the future of the green economy and livelihoods are at stake, a positive result on climate finance should build on other important milestones coming up. Here my special attention goes to the annual meetings of the IMF and the World Bank, as well as to the Group of Twenty (G20) finance ministers meeting in Rome right before the start of the COP26 Leaders’ Summit.

The road to an effective solution for climate financing at COP26 lies through comprehensive efforts to address not just the roadblocks accumulated through years of futile negotiations but also the immediate fiscal challenges brought by COVID-19. Many vulnerable countries risk defaulting on their Nationally Determined Contributions, current or enhanced. The road to walking the talk on the Paris target on finance starts with making sure these countries are the primary beneficiaries of any new issuance of Special Drawing Rights (SDRs) and that they secure a significant share of those proceeds for climate action.

A second stepping stone is a comprehensive, all-hands-on-deck debt restructuring for the most affected countries to help them advance green solutions to their problems, through such instruments as debt-for-nature and debt-for-climate swaps and more. The G20’s Debt Service Suspension Initiative, despite its extension, represents merely a duct tape solution to a monumental problem. Last but not least, we need ironclad road maps from multilateral development banks to go fully green and 50 percent adaptation-focused by 2024. If parties to the United Nations Framework Convention on Climate Change rise to the challenge, then the climate finance agenda at COP26 stands a chance to win. Otherwise, another big-ticket item that previous generations were too lazy and careless to pay for will end up on the tab of my own.

VLADISLAV KAIM is an economist committed to ensuring green and decent jobs for youth and a member of the UN Secretary-General’s Youth Advisory Group on Climate Change.

I JOINED THE CLIMATE movement out of necessity. As a Pacific Islander from a large ocean state, I know all too well the impact of more severe weather events, rising and warming seas, and longer seasons on island nations like my own.

We need to move away from looking at the climate crisis as an environmental issue—it is an ethical issue, a human rights issue, an economic issue. It is about peace and security. Whether we like it or not, all these things are connected. And the solutions lie in our ability to take charge of this capitalist, greed-driven system and fundamentally change the world we inhabit.

If we do not vehemently oppose this current system, we give currency to it. By allowing it to continue, we are giving it our tacit support.

There are, as is often the case, many ways to challenge this current system. But I would like to reflect on two key points: the value of communities and grassroot activities in combating the climate crisis and the importance of social movements in speaking truth to power.

In the development process, we often run the dangerous risk of treating communities as problems to be solved and not as agents of change and contributors to the solution. If we would like to achieve our genuine climate ambitions, we need to change this. Communities possess a wealth of experience in fostering and sustaining a healthy relationship with the environment, and it is on this richness that we should draw. We should take our cue from them.

This also implies that we need to adjust the way that we measure the success of our actions to ensure that we are accountable to grassroots communities and the people on the frontlines of the climate crisis—as well as the people whose futures are affected by the choices we make today. We have to make certain that our processes are informed by community needs.

We know that young people face a unique set of barriers and challenges when engaging in the various policy and change-driving spaces. Consequently, to ensure that we encourage the fullest participation possible, we need to put in place mechanisms that protect young people so they can challenge the “powers that be” without fear of retaliation. FD

ERNEST GIBSON is a climate activist in Fiji and a member of the UN Secretary-General’s Youth Advisory Group on Climate Change.

Leaders must deliver a comprehensive, sustainable solution to climate finance 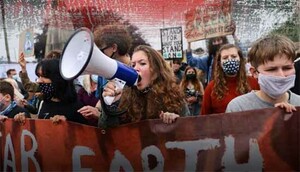 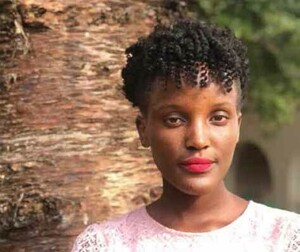 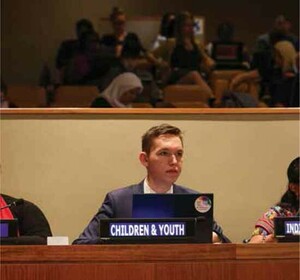 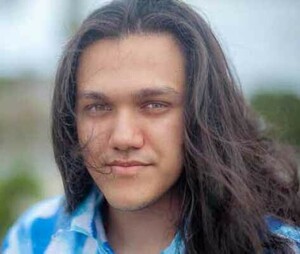