Governments across the world adopted stimulus packages in 2020 to address the COVID-19 pandemic, with those in advanced economies outstripping those in the rest of the world. The resulting high budget deficits must be brought in line with available resources as pre-pandemic growth resumes. In doing so, governments will need to reassess their overall tax and spending policies. A key question is how major government spending categories will likely evolve over the next several years and where additional spending needs will rise or ease.

Worldwide military spending has declined by nearly half, from 3.6 percent of GDP during the Cold War period to 1.9 percent of GDP in the years following the global financial crisis.

Worldwide military spending, when estimated on the basis of unweighted country averages, has declined by nearly half, from 3.6 percent of GDP during the Cold War period (1970–90) to 1.9 percent of GDP in the years following the global financial crisis (2010–19) (Chart 1).

Several factors could explain the observed decline in military spending—beyond the end of the Cold War and the associated reduction in international tensions. In advanced economies, one reason may be the pressure for fiscal consolidation, which has persisted—with the average debt-to-GDP ratio exceeding 100 percent in the period following the financial crisis. The advent of the COVID-19 pandemic and the accompanying support from budgets to combat it have raised the ratio by another 16 percentage points (IMF 2021).

Second, since the early 2000s, developing economies have sought to allocate a larger share of their budgets to education, health, and infrastructure to meet their populations’ growing needs and to promote growth by investing in physical and human capital.

More recently, the focus has shifted to achievement of the United Nations Sustainable Development Goals, which requires a major increase in government spending on the development of human capital.

Last, advanced economies are faced with rapidly aging populations. In the absence of major reforms of pension and health systems, rising age-related spending will continue to exert pressure on other public spending (Clements and others 2018).

Although military spending has declined, it varies considerably across countries. Chart 2 shows which countries spend less than 2 percent of GDP on defense (83 in total), between 2 and 5 percent (48), and more than 5 percent (7). Several advanced economies are among the top 15 military spenders and responsible for more than 80 percent of military spending worldwide. Despite this heterogeneity, one cannot rule out the possibility that a large number of countries share a trend toward a similar level of spending to GDP over time.

We find that military spending in relation to GDP is not converging to a common level in 138 countries in our sample, but rather taking three different paths (Clements, Gupta, and Khamidova 2021). In the first group of 20 countries experiencing a high degree of conflict, spending has actually risen to a substantially higher level and has diverged from the global trend (Charts 3 and 4). This group accounts for 5 percent of global military expenditure and includes Armenia, Azerbaijan, the Democratic Republic of the Congo, Oman, and Saudi Arabia.

The second group has the largest number of countries—77, of which 30 are advanced economies—accounting for more than 90 percent of global military spending. In this group, outlays on average have plateaued at about 2— 2½ percent of GDP. Their average military outlays in relation to GDP fell significantly from 1990 through the mid-2000s, but have changed little since then. This group includes China, India, Russia, the United Kingdom, and the United States. All these countries are members of the top 15 military spenders in absolute terms.

In the third group, comprising 41 countries, spending has come together at an even lower level of slightly less than 1 percent of GDP. This group consists of 41 countries, only 2 of which are advanced economies—Lithuania and Slovenia.

High military spending by neighbors can be perceived as threatening, prompting a country to allocate more to defense.

There are many considerations that influence the likelihood of a country’s being in a particular spending group. First, high military spending by neighbors can be perceived as threatening, prompting a country to allocate more to defense. In addition, a country is likely to spend more on the military when it faces significant political instability, violence, and terrorism within its territory. Moreover, as discussed earlier, growing age-related and social spending (on education and health) in advanced and developing economies, respectively, could sway budget allocations for defense. The competition for budget resources may be less fierce in developing economies that have the potential to raise more taxes and are striving to do so; this is unlikely in advanced economies.

Finally, whether a country is likely to be in one group rather than another can be affected by membership in a military alliance, such as the North Atlantic Treaty Organization (NATO). Membership in an alliance could exert pressure to either raise or lower military spending. A country that belongs to any of the eight major military alliances in the world has certain obligations when it comes to military spending, while also benefiting from the spending of other alliance members.

We find that political stability and little risk of violence or terrorism, high social spending, and a low level of military spending by neighbors are associated with a higher likelihood of being in the low-spending groups (groups 2 and 3). Our analysis shows that membership in military alliances (such as NATO) does not have a discernible effect on military spending.

Implications for the post-COVID era

Our results highlight different trends in spending across country groups. In a small group of countries (group 1), conflict has driven increases in outlays to a substantially higher 5 percent of GDP, while in a group of primarily developing economies (group 3), spending has fallen to relatively low levels. A country’s particular group is influenced by its political stability and risk of violence, its social spending, and military spending by its neighbors. These results underscore the positive economic side effect of efforts to secure a more peaceful world by reducing internal and external conflicts—not only on economic growth but also on government budgets, by reducing military spending.

For the largest country group (group 2), it appears that two countervailing forces will determine the future path of military spending. On the one hand, the need to reduce non-COVID-related spending to support fiscal consolidation and maintain social spending will put downward pressure on these outlays. On the other hand, military spending in this group has plateaued in recent years as a share of GDP and no longer shows a tendency to decline over time. Defense spending may in fact start to inch up if global tensions rise. FD

BENEDICT CLEMENTS is a visiting professor at the Universidad de las Américas, Ecuador; SANJEEV GUPTA is senior policy fellow at the Center for Global Development, Washington, DC; and SAIDA KHAMIDOVA is an independent researcher. 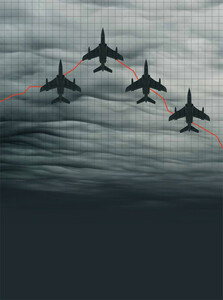 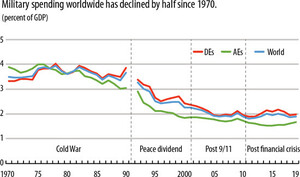 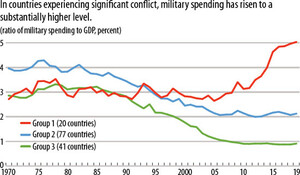 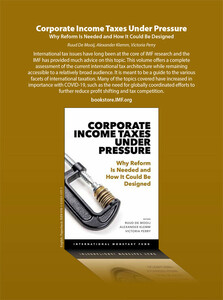