Historically, sovereign borrowing has played a major role in emerging market economies. Literature going back to the 1980s has argued that the difference in interest rates between US Treasury securities and emerging market government bonds affects demand for emerging market debt. More recently, this tight link has begun to weaken.

Chart 1 shows a much lower correlation since the global financial crisis between capital flows and policy interest rate differentials, which directly affect short-term government bond rates. This is because private capital flows, such as cross-border bank flows and corporate loans and bonds, have become a much more significant component of emerging markets’ total external borrowing since the early 2000s. Private capital flows are more likely to be affected by private investors’ perceptions of risk for a particular emerging market economy than by government bond interest rate differentials. Of course, public flows can also be sensitive to global risk perception, especially if they are in local currency. Thus, US policy affects both private and public capital flows in and out of emerging markets. Note that these flows can also go in opposite directions: public flows could come into emerging markets and private flows could go out, if US policy rates go down and global risk sentiment goes up.

Unprecedented action by the Federal Reserve led to a comeback of the initial $100 billion in outflows of public and private portfolio holdings (securities such as stocks and bonds) that had left emerging markets between January and May 2020. The Fed’s action not only lowered borrowing costs for emerging markets, but it also helped to ease global risk aversion, which in turn encouraged private sector capital flows into emerging markets during the second half of 2020, with a lower risk premium on such investments. There was also heterogeneity in capital flows across emerging markets depending on how they handled the pandemic (Çakmaklı and others 2020; IMF April 2020). This heterogeneity was not surprising, as we knew from the previous episodes of US monetary policy changes (Kalemli-Özcan 2019). The responses of emerging markets to the Federal Reserve’s policy stance vary according to country-specific risk, which is directly affected by their handling of the pandemic.

This is all good news, but since we lack real-time balance of payments data to track total capital flows, we might get an incomplete picture about potential capital flow responses to COVID-19 and to US monetary policy from figures that cover only portfolio flows out of emerging markets—$70 billion in portfolio equity and $30 billion in portfolio debt (IMF April 2020). Knowing what types of capital flows were most drained during previous emerging market crises and the composition of the stock of external debt in emerging market economies at the outset of the pandemic will deliver a fuller understanding of emerging markets’ remaining vulnerabilities to possible future capital outflows under changing global conditions.

So what was the currency and sector composition of emerging market debt at the end of 2019, just before the pandemic? While portfolio debt, composed of emerging market government and corporate borrowing in bonds, constitutes a significant portion of their external debt, cross-border bank loans are equally important. Yet these loans are not included under portfolio flows. In emerging markets, a disproportionate share of external liabilities (65 percent) is in portfolio debt (bonds) and other investment debt (loans), in about equal amounts. Portfolio equity and foreign direct investment constitute the remaining 35 percent. Sovereigns account for over 60 percent of the portfolio debt, whereas banks and corporate loans together account for 80 percent of other investment debt (Avdjiev and others 2020). Although sovereigns can borrow externally via local currency bonds, most cross-border bank and corporate bonds and loans are in US dollars.

It is important to know which borrowing sector and what type of asset class lost the most foreign capital during previous emerging market crises, such as the 2008 global financial crisis and the 2013 “taper tantrum,” when US Treasury yields surged on speculation that the Federal Reserve would slow, or “taper,” its purchases of financial assets to boost the economy. During those episodes, the largest capital outflows from emerging markets were cross-border bank loans, followed by cross-border corporate loans and corporate bonds, as shown in Chart 2.

The 2008 and 2013 episodes show that what we witnessed in terms of capital outflows from emerging markets at the beginning of the pandemic in March—May 2020 actually could have been worse. During the financial crisis and taper tantrum episodes, outflows focusing on total debt of the private sector—as opposed to portfolio debt alone—were understandably much larger than the $30 billion in portfolio debt outflows early on in the pandemic. As for the $70 billion that left portfolio equity, this was not surprising since this is the riskiest emerging market asset class and COVID-19 was the biggest shock since the global financial crisis in terms of investor flight from risk.

Banking and corporate debt flows for emerging markets stayed intact in 2020, unlike during the global financial crisis and the taper tantrum, thanks to fast, clear, and unprecedented action by the Federal Reserve. US monetary policy is the key determinant of emerging market private sector flows, which are in dollars and borrowed from private creditors, and sensitive to the risk appetite of global investors.

Will we witness another taper tantrum event, with capital fleeing emerging markets once US policy rates rise as the US economy strengthens? The answer depends on country-specific risk, which is not only a function of classic vulnerabilities, such as high external debt, high domestic private sector foreign currency debt, and inflation, but also emerging markets’ policy response to COVID-19. So far, emerging markets, like advanced economies, have adopted a fiscal/monetary policy mix. As we know from emerging markets’ own histories, fiscal policy has a specific role in the nexus of external debt, domestic debt, and inflation.

Emerging market governments must fight the pandemic domestically, and their private sectors must roll over their external foreign currency debt. This means that these governments need to raise financing both domestically and externally, not only to fund the fight against the pandemic but also to prepare for possible private sector defaults leading to government-financed bailouts. However, these countries’ governments have limited fiscal space. There were large differences between advanced and emerging market economies in the scale of their fiscal packages early in the pandemic. As of early 2021, these differences had grown larger; emerging market economies put together fiscal support worth only 6 percent of their GDP on average, compared with average support of about 20 percent of GDP in advanced economies (IMF 2021).

At a time when emerging market economies need all the support they can get, they need to raise both domestic and external financing.

A close look at the US numbers can put things in perspective when it comes to the size of this shock relative to the global financial crisis. So far in the pandemic, US active and promised future support amounts to $7.25 trillion, which is 34 percent of 2019 US GDP. In comparison, US support of $830 billion in the wake of the 2007–09 financial crisis amounted to just 6 percent of 2007 GDP. The fiscal support needed for a shock like COVID-19 was dramatically larger.

Many emerging market economies, lacking the resources to mount fiscal packages on this scale, added monetary policy to the mix. Like advanced economies, they turned to asset purchases, so-called quantitative easing (QE) programs. Academics and policymakers immediately warned of debt monetization—printing money to buy government debt. The fear is that this will lead to inflation in emerging markets, reversing the hard-won gains of the past two decades, as a result of the adoption of inflation-targeting regimes.

Fifteen emerging market economies undertook these programs with the rationale that, without them, the increase in the budget deficit would food the market with government bonds, forcing interest rates higher. By purchasing these bonds, emerging market central banks hoped to prevent this (BIS 2020; IMF 2020). So far, most of these programs, though small, have been successful, with a few exceptions where central banks did not have the credibility to assure markets that they would not fund the government indefinitely. The cost of credit default swaps (CDSs)—essentially insurance against default, a good barometer of external financing costs—reflects in part this lack of confidence. The CDS spreads have increased on certain emerging markets but not on others, reflecting the heterogeneity in the credibility of the monetary/fiscal policy mixes.

At a time when emerging market economies need all the support they can get, they need to raise both domestic and external financing. Higher costs for external financing can lead to disastrous outcomes at such a juncture, especially if the Federal Reserve starts raising rates, reversing the accommodating tide it has provided to emerging markets so far. So emerging market economies should balance the monetary and fiscal policy mix carefully, communicating these policies in a transparent way and watching closely their effects on their external borrowing costs. FD

$EBNEM KALEMLI-ÖZCAN is a professor of economics at the University of Maryland, College Park. 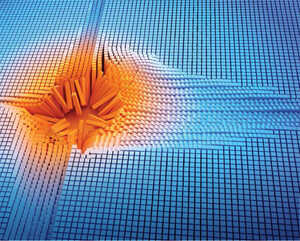 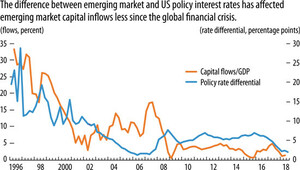