Jump to Content Jump to Main Navigation
Inequality in the Time of COVID-19
All metrics are not equal when it comes to assessing the pandemic’s unequal effect
Author: International Monetary Fund. Communications Department

The severe impact of the COVID-19 pandemic is clearly seen in the numbers: more than 3.1 million deaths and rising, 120 million people pushed into extreme poverty, and a massive global recession. As suffering and poverty have risen, some data show an increase in another extreme: the wealth of billionaires.

With both extreme poverty and billionaire wealth on the rise, the pandemic’s effect on inequality may appear obvious. The reality is not as simple as you may think.

Inequality is a notoriously challenging concept on which to make definitive statements. Inequality of what? Of household income or of GDP per capita? Or even of mortality rates themselves, across different groups? Inequality among whom: should it be viewed at the level of individuals? Households? Countries? Even once a distribution is precisely specified—so that we are clear about what is distributed among whom—firm conclusions about the direction of inequality change will generally depend on what part of the distribution you care about most. Different measures of inequality— such as the Gini coefficient, the Theil index, and the income share of the wealthiest in society—are sensitive to different parts of the distribution and can in principle rank inequality before and after the pandemic differently. Clarity about which inequality is being measured matters a great deal for assessing the unequal impact of the pandemic.

Consider first the global distribution of COVID-19 mortality itself. Using the concept of life years lost to the disease—estimated using ages at death and the residual life expectancies at those ages—we find that the mortality burden of the pandemic is positively correlated with national income per capita, despite the superior health and public prevention systems in rich countries (Ferreira and others 2021). The chart plots the number of years of life lost to the pandemic per 100,000 inhabitants against GDP per capita for 145 countries, using log scales on both axes (see chart, next page).

Although there is enormous variation at each income level—with Brazil’s mortality burden (adjusted by population) 1,000 times greater than Thailand’s, for example—there is nonetheless a very clear positive association. Richer countries suffer greater losses of life years per capita than poorer countries. Measurement error is likely substantial, with a number of poor countries, such as Burundi and Tanzania, clearly underreporting deaths, but the association is so strong that it is unlikely to be spurious. Among other things, it reflects the older age structure of the population in richer countries and an illness whose lethality is highly age-selective. Higher life expectancies, greater urbanization, and the pandemic’s spread along major trade routes also likely have played a role.

But what about the distribution of income, instead of mortality? How did global income inequality change during the pandemic? Well, global inequality in incomes can be understood in at least three ways: first is the question of what happened during COVID-19 to the distribution of GDP per capita among countries—labeled “Concept 1” global inequality by Branko Milanovic. In a recent paper, Nobel laureate Angus Deaton shows that, on average, richer countries also experienced larger economic contractions than poorer countries in 2020 (Deaton 2021). And although by itself this result does not necessarily imply a decline in inequality between countries, it turns out that the actual pattern of income declines did indeed lead to a reduction in (unweighted) inequality between countries during 2020, whether it is measured by the Gini coefficient, the Theil index, or the coefficient of variation. This represents a continuation of the trend since the turn of the millennium, when Concept 1 global inequality began to fall, owing in large part to the rise of China and India. But Deaton argues that, if anything, the pandemic accelerated the decline.

This calculation takes countries as the unit of measurement and thus attaches the same weight to Luxembourg as to China. One might ask, alternatively, what happened during COVID-19 to the distribution of GDP per capita among countries when these are weighted by population. That approach is the same as measuring inequality in an imaginary distribution of all individuals in the world, where all people are assigned their country’s GDP per capita—Milanovic’s “Concept 2” global inequality.

Inequality is a notoriously challenging concept on which to make definitive statements.

When differences in GDP per capita are weighted by population, inequality between countries increased during 2020—which Deaton argues can be attributed to the pandemic. More specifically, it can be attributed to the sharp economic contraction in India, which suffered a great deal both in terms of mortality and economic performance—even before the massive second wave in 2021. Although China’s positive growth (and far fewer deaths) helps offset India’s decline, China is now too close to the global average income to completely compensate for India’s economic losses. When India is omitted from the calculation, Concept 2 inequality continues to decline, as it had been doing since the 1990s. Through India, the pandemic did contribute to a reversal in the previous pattern of falling weighted inequality between countries.

Since Concept 2 inequality appears to have risen in 2020, it would be enough for “average” inequality within countries also to have risen for us to conclude that global inequality among individuals has grown during the pandemic, in conformance with what most people suspect. Unfortunately, it is too early to tell whether or not that is the case: data on individual incomes come from household surveys and administrative sources that are simply not yet available for 2020. For most countries, it will be at least a year, and typically more, before data on income inequality within countries become available.

For the moment, though, it certainly seems plausible that inequality within many countries is on the increase, given evidence of rising poverty and rising billionaire incomes. There are good reasons to expect that the pandemic both created new inequalities and exacerbated preexisting income gaps within countries. There is long-standing evidence from many countries that people entering the labor market during a severe recession earn less than the cohorts just before and after them—and that those differences linger for many years. By inducing a massive global recession, COVID-19 has certainly created new inequalities among cohorts of young people.

The pandemic has also exacerbated preexisting inequalities in the labor market, largely because the ability to work remotely is highly correlated with education, and hence with pre-pandemic earnings. Despite all the talk of “essential workers” and everyone being “in this together,” the stark reality is that job and income losses are likely to have hit lower-skilled and uneducated workers the hardest. Early evidence from both public and private big data sources in the United States seems to confirm this—although there are interesting nuances that we don’t have space for here. In developing economies, the same labor market forces are, if anything, turbocharged by informality: when lower-skilled labor is predominantly informal, those workers have no access to furlough programs or unemployment insurance. This year, hundreds of millions of such workers faced very stark trade-offs, on a daily basis, between staying safely at home or facing the threat of infection to provide food for their families.

Given preexisting racial and gender occupational differences, the exacerbation of these inequalities in the labor market is also likely to have translated into even greater racial and gender disparities in many countries. In addition, with the burden of additional time required for childcare and housework falling disproportionately on women, gender inequality in earnings is particularly likely to have grown even wider.

Capital markets are also likely to have played a nontrivial role in generating inequality during the pandemic, particularly at the top. In response to the widespread economic collapse in March and April 2020, the world’s key central banks further loosened monetary policy, injecting enormous amounts of liquidity into financial markets. While that additional liquidity has not so far translated into goods price inflation, it has certainly helped keep asset prices high. It is the main reason stock markets boomed while the economies that underpin them were in the doldrums. These monetary policy interventions were well-intentioned, and they are likely to have helped prevent bankruptcies and preserve jobs. Nonetheless, they did inflate the value of assets held primarily by rich people and have a lot to do with the generalized growth of billionaire incomes. Owning shares in Amazon or Zoom wasn’t the only way to gain wealth during this period.

Yet, despite these multiple reasons the pandemic can be expected to have raised income inequality within countries, we cannot yet be sure of just how general those increases are. For one thing, evidence is emerging from some (apparently) unlikely places that social protection policy responses—such as income transfers targeted to poor and vulnerable workers—have worked rather well. Early work out of Brazil’s well-respected IPEA think tank suggests that generous “emergency support” transfers helped reduce both poverty and inequality in Brazil between May and September 2020, despite the country’s disastrous response to the health emergency. Similar claims have been made about five European countries: France, Germany, Italy, Spain, and Sweden (Clark, D’Ambrosio, and Lepinteur 2020).

The upshot is that we will not know the effects of the pandemic on income inequality within countries for sure until reliable administrative and household survey data become available. In the meantime, the tentative good news that income transfers can provide an effective response, at least in the short term, should spur other countries into action. But more action is needed: perhaps the most insidious new inequality spawned by the pandemic is between children who have been able to continue their schooling over the past year—whether in person or online—and those who have not, because of poor connectivity or weaker, poorer schools. Students in the latter category are often at great risk of falling substantially behind in their learning, or even of dropping out altogether. The learning and schooling inequalities arising from these differences are as stark as they are widespread, and as these children join the labor force the consequences are likely to be with us for decades to come.

The overall picture that emerges from these considerations is, for the moment, one of falling income gaps between countries (when not weighted by population) and—speculatively and preliminarily— rising gaps within countries, on average. Given the educational and labor market dynamics I have outlined, the latter gaps may well persist for more than a generation. What is more, it now appears plausible that even unweighted inequality between countries may well rise in 2021, if the unequal spread of vaccination allows countries such as the United States, the United Kingdom, and parts of developed Asia to recover much more rapidly than India, Latin America, and much of Africa. FD

FRANCISCO H. G. FERREIRA is the Amartya Sen Professor of Inequality Studies and director of the International Inequalities Institute at the London School of Economics. 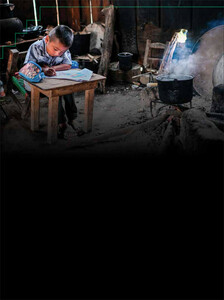 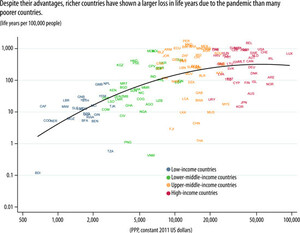