THE VALUE of a crisp banknote is easy to understand. But the value of a country’s natural landscape, facing threats including climate change, natural disasters, and overzealous developers, is sometimes harder to see—until it’s possibly too late.

In Samoa, population just under 200,000, there is a history of celebrating the fragile natural beauty of its surroundings on the country’s currency, the Samoan Tala.

Samoan banknotes—in every shade of the rainbow—depict infuential people and institutions, but also the South Pacific country’s unique and irreplaceable natural environment: a cascading waterfall (Sopoaga Falls); Samoa’s national flower, the teuila, also known as red ginger flower; the national bird (the manumea, an endangered species found only in Samoa); and a pristine white sandy beach.

Samoan currency, last issued in 2008, has in turn received awards for its design aesthetic; the vibrant yellow $20 tala bill, featuring Sopoaga Falls and a manumea, was singled out as one of the world’s “most beautiful” banknotes by Banknote World.

Samoa’s $20 tala bill has been honored for its design. It features the national bird (the manumea), national flower (the teuila), and Sopoaga Falls.

More recently the commemorative $10 tala bill, printed in honor of the 2019 Pacific Games, which Samoa hosted, was a nominee for the International Bank Note Society’s Banknote of the Year.

The vivid blue polymer bill is also believed to be the world’s first carbon-neutral banknote, according to Central Bank of Samoa Banking and Currency Services Manager Lea Collins. The emissions used in production of the banknotes were offset by purchases of carbon dioxide savings elsewhere, according to the central bank and bill design firm De La Rue.

It was especially fitting, Collins told F&D, that the banknote’s rollout last year was tied to the first “green” Pacific Games, which presented an opportunity for host Samoa to campaign against single-use plastics and promote carbon offsets for participating countries.

The carbon-neutral banknote was issued against a backdrop of growing concern about climate change in Samoa and internationally.

Living in a small state made up of two main islands, Samoans are increasingly accustomed to damage from extreme weather events, in addition to threats from rising sea levels and climate-related natural disasters such as Cyclone Gita in 2018.

Samoan Prime Minister Tuilaepa Sailele Malielegaoi has advocated more urgent international action against climate change, calling it an “existential threat . . . for all our Pacific family.” In a 2019 speech to the United Nations, he said the crisis is not limited to small island or developing states. “Climate change crosses borders uninvited and does not discriminate by size or economic status,” he said.

Samoa issued a commemorative $10 tala bill in 2019 to celebrate the Pacific Games, which the country hosted. It is thought to be the world’s first carbon-neutral banknote.

As Samoa’s first vertically oriented banknote, the limited-edition $10 tala bill entered circulation in 2019, joining the $10 tala bill already in use, which highlights images from education and sports and is the most widely circulated banknote in the country, according to the central bank.

Samoa’s other multicolored banknotes, last issued in 2008, each focus on a different theme:

Printed currency remains important in Samoa and likely will stay that way for some time. Collins says the bank is considering a redesign of its banknotes and that although Samoa is studying digital-currency trends, “culturally we prefer using cash over electronic payments.” FD

MELINDA WEIR is on the staff of Finance & Development. 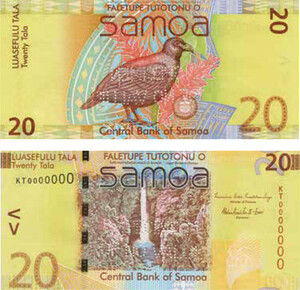 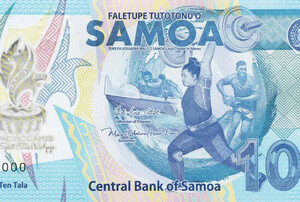 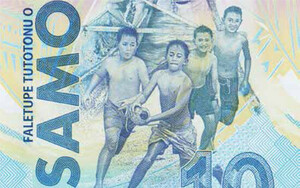