The immigration debate often focuses on culture, identity, and the economy. In countries such as the Australia, Canada, and the United States where many immigrants—especially those who have moved for economic reasons—assimilate into the labor force quickly, the case for more immigration is built on its potential economic benefits. Research shows that immigration does not reduce the capital intensity of the economy, but rather it allows firms to expand and investments to adjust, and it also promotes innovation and growth—especially when highly skilled immigrants are admitted. There is also little evidence that immigration displaces jobs or depresses wages in the receiving countries (see, for example, Lewis and Peri 2015 and Peri 2016). Yet the discussion over immigration often pays insufficient attention to the Achilles’ heel of the global North: its demographics. Fertility in these countries currently stands at 1.7 and fell below replacement—that is, the level at which a population exactly replaces itself from one generation to the next—around 1980. Consequently, the difference in births and deaths would produce population declines and substantial increases in average ages in the North, both of which could disrupt labor markets, threaten the fiscal sustainability of pension systems, and slow down economic growth, unless total net immigration offsets such declines. The persistent historical trends mentioned have inescapable consequences in terms of population. Between 1950 and 2010, the populations of the rich regions of the North increased through net immigration, and since 1990 immigration has been the North’s primary source of population growth. In Europe, immigration accounted for 80 percent of the population growth between 2000 and 2018, while in North America, it constituted 32 percent in that same period.

The bottom line is that only net immigration can ensure population stability or growth in the aging advanced economies of the North—and this will happen only if we promote forward-looking immigration policies that allow larger numbers of immigrants and consider their long-run impact, rather than focusing only on the short-term calculations of their (mostly political) costs.

While these broad trends suggest an important role for international migration in reducing demographic disparities, one could ask whether they act systematically to slow population declines in the North. In other words, are immigrants replacing the declining number of natives across countries? A closer look suggests that they are not.

For international migration to respond to population pressures and act as an automatic demographic stabilizer, people would need to move from young countries with fast-growing populations to aging countries with slow-growing populations. Chart 1 shows the correlation between the fertility rate in 2000 and subsequent net immigration rates from 2000 to 2019 (net inflow of foreign born divided by population in 2000) across 191 countries for which data are available. The size of a country’s bubble is proportional to its population in 2000. For migration to act as a demographic stabilizer across countries, there would have to be a negative correlation between these two variables across countries.

The chart instead shows no correlation at all, implying that countries with low fertility rates in 2000 did not experience a higher immigration rate in the following 20 years. Immigration thus did not play a role in balancing population growth across world countries.

Chart 2 focuses on the countries of Europe, which include some of the richest and lowest-fertility countries in the world. Even in this case, the relationship between fertility and immigration, if anything, is positive. The figure shows that several of the lowest-fertility countries (mostly in eastern and southern Europe) experienced low immigration rates. Some of these countries, such as Hungary and Poland, have recently elected governments decidedly hostile toward immigrants. It is quite clear that in the rich North, lower fertility rates do not, by themselves, facilitate higher immigration. In the region with the highest fertility rates, Africa, there is also no correlation between fertility and immigration rates. It does not appear, therefore, that at a country level international migration is acting as a population stabilizer. This is because lacking forward-looking policies, there is no clear channel through which aging societies—which become economically stagnant and less innovative and whose citizens are likely to fear international migrants for the change they bring—will attract more immigrants. This implies that immigration will not automatically solve the demographic dilemma in the global North but that policy needs to play an active role if it is to do so.

Not only would the flow of immigrants into countries whose population is declining serve the purpose of avoiding depopulation, it would also help with the countries’ age structures. Migrants are usually younger than natives in the receiving country. Relative to natives, a larger proportion of immigrants are of working age. Therefore, new immigrants increase the size of the labor force, countering its natural decline in the advanced economies of the North, where people are aging out of the group at a faster rate than the young are entering.

It is also increasingly difficult to sustain pay-as-you-go pension systems in these rapidly aging countries, which in only a few decades have gone from having 10 working people per retiree to just 3 or 4. More immigration, especially in rapidly aging countries, would help slow the growth of the age dependency ratio. While immigrants will eventually age, a significant inflow of young working-age people during the years of greatest native decline will allow a gradual and more manageable transition.

The fact that people migrate when they are young is also the reason that several studies find that immigrants have a positive fiscal contribution over their lifetimes (Orrenius 2017). Clearly, a positive net fiscal effect depends on the ability of immigrants to integrate into the labor market and offer sought-after skills. The potential, however, for immigrants to improve the fiscal balance of a receiving country is real. In the United States, for instance, where immigrants’ employment rates are high and a large share are highly educated, the average lifetime fiscal contribution of an immigrant who arrived in the last 10 years has been calculated at $173,000.

Immigrants also support the demographics of advanced economies because their fertility rate is higher than that of natives. In the United States, the total fertility rate of natives was 1.76 children per woman in 2017, whereas that of immigrants was 2.18. The presence of immigrants helps to keep U.S. fertility at levels closer to the replacement rate.

From the perspective of the South, policies allowing higher migration to the North would help reduce demographic pressures in high-fertility countries. While the emigration of highly educated people (the so-called brain drain) could have negative effects on sending countries, several studies show that remittances, return migration, and “brain gain” are channels of potential beneficial effects. Research shows that emigration rates are highest in intermediate-income countries and not in the poorest ones. When people are trapped in subsistence, they lack even the basic liquidity to invest in migrating or to learn about outside opportunities. Increased immigration to the North would, therefore, likely benefit intermediate-income countries whose people are more likely to take advantage of these opportunities.

From a demographic point of view, therefore, an increase in immigration flows, especially of young people, to advanced economies in the North seems desirable. It would reduce population decline, keep the size of the labor force from shrinking, improve age dependency ratios, and produce positive fiscal gains. From a policy standpoint, this means increasing the number of immigrants allowed, reducing other constraints on immigration, and planning for future inflows.

However, in recent years, Europe and the United States have, if anything, tightened their immigration policies and shown growing skepticism toward immigrants. Interestingly, one reason for this opposition on immigration may be found in demographics itself.

There is increasing evidence that aging societies are becoming more averse to open immigration policies, and older people have systematically more negative attitudes toward immigrants than younger people (Schotte and Winkler 2014). This is paradoxical, as they are the group that stands to benefit the most from immigration: the pension system would be on a more sustainable trajectory, working immigrants do not threaten their jobs, and immigrants work in services often targeted to them, such as caregiving.

Yet the good news is that it appears that such negative attitudes are due more to generational differences than to a simple effect of “aging.” A relative lack of exposure to immigrants among the currently old generations in Europe and the United States may be the reason for such attitudes. In Europe, for instance, surveys suggest that millennials and Generation Z have more positive opinions of immigration than do older generations. As the current younger generations are exposed to more immigration, if they maintain such attitudes as they become older and see their voting power increase, they may support more open immigration policies. Ten the positive demographic returns from immigration may be more fully realized. FD

GIOVANNI PERI is professor of economics and director of the Global Migration Center at the University of California, Davis 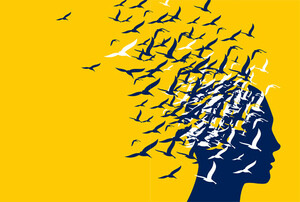 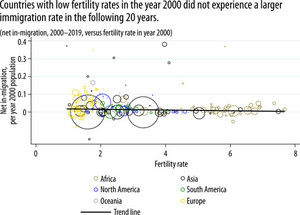 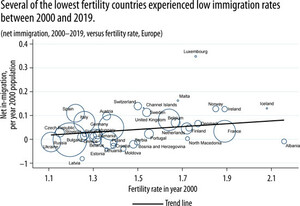