Demographic change is having a fundamental impact on the global economy— but not in the way we once thought it would.

A mere five decades ago, some observers were predicting that the human population was too big and would soon strip the world of resources, leading to mass starvation, collapse of the global economy, and a host of other ills. But the doomsday scenario of mass overpopulation did not materialize. Rather, for the first time in modern history, the world’s population is expected to virtually stop growing by the end of this century, owing in large part to falling global fertility rates.

Japan’s unique population, fertility, and immigration history make it a leading exemplar of this trend. The impact of an aging and shrinking population is already visible in everything from economic and financial performance to the shape of cities and public policy priorities (such as the long-term solvency of public pension, health care, and long-term care systems).

With demographics having such a clear and accelerating impact, Japan is the test kitchen for “shrinkonomics”—a laboratory from which other countries are beginning to draw lessons.

The IMF’s work on the Japanese economy has focused heavily on demographics in recent years— mirroring the intense debate within Japan on how best to respond to the pressures from a rapidly aging and shrinking population. While each country’s experience will be different—and prompt different solutions—some of the key macroeconomic and financial effects can be identified from Japan’s recent experience.

First, aging and dwindling populations can have a direct impact on a country’s labor force and labor markets—particularly the size of the working-age population. Demographic change has been a driving force in Japan’s labor market for several decades. Japan’s potential labor force—those between ages 15 and 64 as a share of the total population— peaked in 1991–93 at just under 70 percent. Since that time, however, the potential labor force has fallen quickly to just above 59 percent, the lowest level among the Group of Seven countries and well below levels seen in the mid-1950s.

Given current low fertility and accelerating death rates, this ratio is expected to continue to decline well into the medium term. With a limited inflow of foreign workers, this implies insufficient workers to maintain current levels of economic activity. Such a linear view of the future is more dire than Japan’s experience, however. The continued demand for labor has spurred both more women and more elderly (those outside the traditional 15–64 working age) to join the labor force. Automation, artificial intelligence, and robotics (including technology to increase productivity per worker) will also be critical to Japan’s response to shrinkonomics.

An older and smaller population also has implications for productivity and long-term economic growth—and IMF research suggests Japan is a valuable case in point (Westelius and Liu 2016). First, older workers may enjoy higher productivity because of their accumulation of work experience, while younger workers benefit from better health, higher processing speed and ability to adjust to rapid technological changes, and greater entrepreneurship, leading to more innovation. These two counterforces suggest an inverted U-shaped relationship between age and productivity, with productivity lowest at the beginning and ending phases of a career. Second, aging is likely to increase the relative demand for services (e.g., health care), causing a sectoral shift toward the more labor-intensive—and less productive—service sector. Third, the size or density of the population may also have an impact on productivity (i.e., productivity rises with greater size and density of a working population).

On the one hand, Japan is in good company with respect to broad demographic trends. Looking across Organisation for Economic Co-operation and Development data, there are many countries with declining populations, and likely more to come. Japan is also not alone—in the region or compared with other advanced economies—with respect to having a low fertility rate, which is common across most of the Group of Seven (G7). Japan also shares with other countries an improvement in health and average lifespan. This is a common trend across most advanced economies, though Japan is certainly doing better than average.

But this is not the whole story. Japan’s unique characteristics put demographic trends (and their macroeconomic and financial impact) in sharper relief than in other countries:

A more elderly and reduced population—which means relatively more retirees, a smaller labor force, and a shrinking labor-based tax pool—also points to the challenge of financing social security frameworks. As the population ages, public expenditure on health care, long-term care, and pensions naturally rises. But in a shrinkonomics context, in which the active, taxpaying labor force is in decline, financing this rise in public spending can be problematic. Japan’s challenges are particularly severe, given that the entire baby-boom population is passing the 75-year milestone in just three years (starting in 2022 and ending in 2025) and the country’s public debt as a share of GDP is already the highest in the world.

The continued demand for labor has spurred both more women and more elderly to join the labor force.

Meeting social security–related obligations while maintaining a sustainable fiscal position and intergenerational equity is a thorny task for Japan’s authorities and will likely require important changes to both the benefits framework and its financing structure. IMF studies on Japan have explored possible policy options.

Among options related to financing, a continuous and gradual adjustment of the consumption tax dominates other potential measures to finance the cost of aging, including higher social security contributions, delaying fiscal adjustment (with an implied prolonged period of debt financing), and increased health copayment rates. Relative to these options, increases in the consumption tax—which apply across age groups—have smaller adverse effects on long-term GDP and welfare, according to one IMF study (McGrattan, Miyachi, and Peralta-Alva 2018). This study also suggests that postponing adjustment through debt financing results in a large crowding-out of private sector investment—by up to 8 percent—with detrimental effects on long-term GDP and welfare. Finally, a uniform increase in health copayment rates for the elderly—which would imply shifting a part of aging costs to current generations—would have regressive consequences.

Older generations, who benefit most from fiscal redistribution (via taxes and transfers), are significantly wealthier than younger generations. Wealth poverty is significantly lower for older generations. Moreover, the wealth ratio of older to younger cohorts is relatively high in Japan compared with Germany and Italy, though lower than in the United States. The evidence thus points to significant wealth inequality across generations.

The relative wealth of older generations in Japan calls into question the costly fiscal redistribution mechanism in place that aims to reduce elderly income inequality mainly via pensions. These and other aspects of public social security frameworks are being actively debated in Tokyo policy circles.

Demographic change may put pressures on a country’s monetary policy space by lowering the natural rate of interest: the interest rate that supports the country’s economy at full employment and maximum output while keeping inflation constant. This dampening effect is particularly problematic for monetary policy in countries that are already experiencing “low for longer” interest rates and inflation dynamics and can impinge on the effectiveness of monetary policy. Japan is again a case in point. IMF studies in this area find that demographic change in Japan has had a significantly negative impact on the natural rate of interest in recent years (e.g., Han 2019). The results of these studies also suggest that Japan’s natural rate has already fallen into negative territory, highlighting the need to move forward with structural reforms to boost potential growth and lift the natural rate. With working-age population growth projected to decline further by 2040, the negative demographic impact on the natural rate in Japan is likely to increase, which may further limit monetary policy’s role in reflating the economy. These findings highlight the importance of boosting potential growth by, for example, accelerating labor market and other structural reforms—including more active immigration policies—to offset the increasingly adverse demographic impact on the natural rate.

Closely related to the dilemmas that shrinkonomics poses for monetary policy is how aging and shrinking populations can affect the financial sector—specifically in how these forces affect financial intermediation by banks. Because demographic trends are likely to influence saving and investment behavior, they can have important implications for demand and supply of lendable funds.

Japan’s demographic headwinds constitute a challenge for all Japanese financial institutions, but particularly for regional financial firms. Because of their dependence on local deposit-taking and lending activities, Japan’s regional banks are sensitive to changes in the local environment. Shrinking and aging populations at the preffectural level are perhaps the most daunting challenge in this respect, particularly for regional banks in rural preffectures. Even metropolitan preffectures, however, will begin to experience declining and aging populations in a more dramatic fashion. More important, while shifts in the age distribution and population growth have to some degree offset one another in the past, this is likely to change over the next decade, creating a potential demographic clif.

Unless Japan’s regional banks find alternative sources and uses of funds, the country’s shrinking populations will necessarily lead to smaller balance sheets and declining loan-to-deposit ratios. Tis, in turn, will continue to put downward pressure on already low levels of profitability. Moreover, the trend of regional banks shifting to a more securities-oriented and fee-based banking model is likely to accelerate in the near future.

Cross-country differences in starting conditions and the structure of demographic transitions will affect how much and how fast countries will have to adapt to maintain positive economic outcomes in the face of aging and shrinking populations. Japan—arguably the farthest along among the Group of Twenty in its struggle with shrinkonomics—is effectively the world’s policy laboratory. Policy solutions found there may have broader application, particularly as other advanced and systemically important countries encounter the same demographic trends. The best medicine must ft the patient, but some common policy recommendations apply (IMF 2020a, 2020b):

GEE HEE HONG is an economist and TODD SCHNEIDER a

division chief in the IMF’s Asia and Pacific Department. 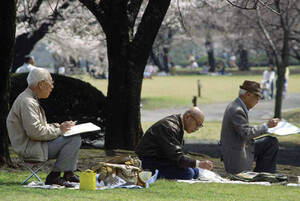