The past 150 years have witnessed one of the greatest of human achievements. In 1870 average global life expectancy was about 30 years; today it is 73 and rising (Deaton 2015). Further, the proportion of life lived free of frailty or illness has remained broadly unchanged, so people spend most of these extra years in good health.

The implications of this development for individuals are profound. For instance, in 1960 the average Chinese newborn had only a 27 percent chance of making it to age 65; today that probability is 83 percent and rising. Around the world, on average, people can now expect to live longer, healthier lives than in previous generations.

The new frontier of aging

While for individuals this is good news, at an aggregate level there is concern over an aging society. In 1965 there were 129 million people over 65 in the world; today there are nearly 750 million, and this figure is expected to reach 2.5 billion by 2100. The number of centenarians is also rising—from 20,000 in 1965 to a projected 19 million by 2100.

The fear is that this phenomenon will weaken economic growth as the number of people of working age declines and that governments’ fiscal burden will worsen because of higher pension and health care costs.

The chart shows the changing size and structure of the global population. The vertical axis shows the world’s population broken down by age, the horizontal axis the split between men and women.

Horizontally the chart shows a staggering increase in the proportion of people over 65. From representing only 5 percent of the population in 1950 to 9 percent today, this cohort is expected to reach 23 percent by 2100. Supporting this population shift will require profound changes in policies, institutions, and practice.

Vertically, however, the chart tells a different story, highlighting not aging, but longevity. From this perspective, children born today have much more time ahead of them than past generations. The likelihood of living into old age has increased, as has the peak of the pyramid, changing what constitutes “old.”

Longevity represents an extension of the duration of life and requires, in the words of Stanford professor Laura Carstensen, a “new map of life.” Longer lives mean changes to when we are educated or married, when we have children, how long we work, and how we spend not just old age, but also youth and middle age (Gratton and Scott 2016). From this perspective the question is not “How do we afford an aging society?” but “How do we restructure behavior to make the most of longer lives?”

Underpinning these changes is the fact that age has become, to a degree, malleable. Nutrition, education, behavior, public health, the environment, and medical practice can influence the pace at which we age. Across a variety of measures (incidence of diseases, mortality rates, cognitive function, physical strength) people are in effect not aging more but aging more slowly.

This malleability requires drawing a distinction between chronological age (how many years since you were born) and biological age (how ft and healthy you are). By defining “old” chronologically, the aging society narrative does not take into account whether people are aging better and rules out structural changes in the course of life. As a result, it focuses only on the negatives of an aging society: more older people who require care and support. This omits the potential gains from a longevity agenda that supports longer, healthier, and more productive lives.

Myth #1 Aging is best measured chronologically In the twentieth century our concepts of age solidified around chronological measures as government birth and death records became more reliable and formed the basis of increasing regulation. The apotheosis of this chronological measurement was the definition of old age as starting at 65, enshrined in the concept of an “old-age dependency ratio.” In contrast, age malleability requires distinguishing between chronological and biological measures of age, which makes for a much smaller rise in the older population (Sanderson and Scherbov 2019).

Myth #2 All countries are aging Over the past two decades the median age in France, the United Kingdom, and the United States has increased, but average mortality (as measured by population deaths per thousand) has nonetheless declined. The lower the average mortality rate, the longer the average citizen can expect to live. If we measure old age as years from birth, the citizens of these countries have been getting older, but if we think of old age as proximity to death, these nations are now in a sense younger and possess a larger future. That does not seem unambiguously best described as an aging society.

Myth #3 Japan is a harbinger Japan has the highest life expectancy in the world and is often seen as leading the way in terms of an aging society. Japan’s demographic transition has produced the largest increase in life expectancy and the deepest decline in fertility among the Group of Seven (G7) countries since 1950. As a consequence, the aging society effect is much more pronounced in Japan than in its G7 peers. The balance of an aging-society versus the benefits of longevity varies across countries and so, too, will the impact on economic growth and required policies.

Myth #4 Aging is a rich-country problem Given the population’s young average age in many low-income countries, it is often assumed that aging is a rich-country problem. However, these young populations will age in the years ahead. Countries need to support 15-year-olds now to ensure that when they reach 65, in 2070, they are aging as well as possible. Aging does not begin at 65, and governments should recognize this by putting in place policies to help the elderly, both in the future and today.

The longevity agenda aims to address the whole life course and help people seize the opportunities longer lives present. The agenda covers all aspects of life, but employment, education, and health are central areas of focus and those in which governments have a key role to play.

Supporting older workers. Crucially important is finding ways to help older workers remain productive. This topic covers more than just retirement age, since withdrawal from the workforce starts at about age 50 and is often involuntary.

The importance of this topic is evident in employment statistics. Between 2008 and 2018 people over 55 accounted for 79 percent of employment growth across Organisation for Economic Co-operation and Development countries and 103 percent in G7 countries. Further, the most important driver of cross-country variations in employment of older workers is not changes in the size of the older population, but changes in their likelihood of working.

Policies to promote higher labor force participation among older workers will depend on the generosity and availability of pension plans, the health and support available to workers, and the industrial structure and types of jobs offered. The use of robotics and artifcial intelligence should also help support employment among this group. Older workers tend to value flexible and part-time work arrangements highly, often despite lower wages—something that Japan and Singapore have put to use.

Supporting older workers also requires tackling deep-seated corporate ageism that makes it hard for older workers to get new jobs and more likely for them to be fred. Governments need to be proactive in extending disability rights as well as enacting diversity legislation to support and protect older workers.

Supporting longer productive lives. Longer lives will require a greater focus on lifelong learning. Currently education is front loaded in a three-stage model of life consisting of “learn, earn, and retire.” However, longevity and technological change will lead to a major increase in the need for adult education, requiring key changes in education systems.

Longer careers will demand more flexibility for workers of all ages. Taking time out to retrain; for family support (both of children and of aged parents); and for reorientation, recuperation, and repurposing as individuals ramp up and ramp down their work commitments will all be necessary in a multistage life.

All’s well that ages well. As populations age, the disease burden shifts toward noncommunicable diseases, such as heart disease, cancer, diabetes, and dementia. In 2016 these diseases accounted for 71 percent of deaths globally, with 78 percent occurring in low- and middle-income countries. Noncommunicable diseases are expensively and poorly managed through intervention, so to reduce their impact, health care providers should consider a major shift toward preventive health care. As with past health improvements, this will require public education aimed at changing people’s behavior when it comes to activity, diet, engagement, and purpose. New monitoring and predictive technologies, such as artificial intelligence and big data, will be needed as well.

The dominant cause of many noncommunicable diseases is age itself. This suggests that efforts to slow the aging process should play a more prominent role in treatments rather than targeting particular diseases, such as cancer (Ellison, Sinclair, and Scott 2020). A growing research program is focusing on understanding why we age and developing treatments that, if successful, could lead to dramatic changes in the malleability of age (Sinclair 2019).

Supporting diversity. Age malleability means that there is considerable diversity in how people age. As many more millions live beyond 65, this will become ever more apparent, causing problems for policies couched purely in terms of chronological age, such as raising the state pension age. Governments need policies that provide support for those who are unable to continue working while providing incentives to work for those who can. As is done with with other age groups, policymakers should recognize that chronological age is a weak predictor of people’s needs and abilities and should establish more nuanced policies with different options depending on circumstances.

Targeting longevity. There is a growing debate around alternatives to GDP as a way of measuring welfare. One potential alternative is healthy-life expectancy. Given that improvements in healthy-life expectancy depend not only on income and job security. but also on broader social purpose—as well as on environmental quality and inequality— longevity usefully connects to a broad range of agendas. Longevity councils (like Japan’s Council for Designing 100-Year Life) would help monitor progress toward these targets and improve coordination across government departments.

By defining “old” chronologically, the aging society narrative dos not take into account whether people are aging better.

How we are aging is changing, undermining nineteenth-century French philosopher Auguste Comte’s assertion that “demography is destiny.” Individuals are living longer, healthier lives—and that should be good news for people and the economy. Designing policies to maximize the number of people of all ages who benefit from this longevity effect while seeking to boost productivity over a longer life is the goal. FD

ANDREW SCOTT is professor of economics at the London Business School and cofounder of The Longevity Forum. He is the author (along with Lynda Gratton) of the 2016 book The 100-Year Life: Living and Working in an Age of Longevity.

Aging into the future 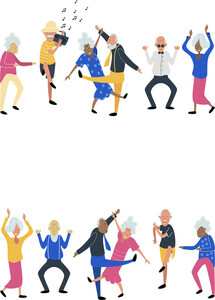 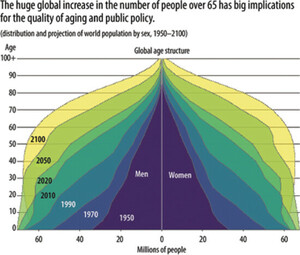