National oil companies (NOCs) are economic giants. They control at least $3 trillion in assets and produce most of the world’s oil and gas. They dominate energy production in some of the world’s most oil-rich countries, including the Islamic Republic of Iran, Mexico, Saudi Arabia, and Venezuela, and they play a central role in the oil and gas sector in many emerging producers.

NOCs are poorly understood because of their uneven financial reporting practices, and NOC governance has often been treated as a niche issue in public finance literature. A new report and accompanying database from the Natural Resource Governance Institute focus on the failure to rigorously scrutinize NOCs and the policies their governments employ to manage them, and how this failure carries major risks for dozens of economies around the world that depend on these companies’ sound management of public resources.

Many NOCs remain opaque. For the most data-rich year covered by the National Oil Company Database, only 20 of the 71 NOCs we studied published information sufficient to populate all 10 of the database’s “key indicators.” Information on production and revenue is available for most NOCs, but less than half of those we studied reported on capital expenditure or employment. On average, NOCs in the Middle East and sub-Saharan Africa disclosed the least amount of information. These findings reinforce the results of the institute’s Resource Governance Index, which revealed that 62 percent of the NOCs reviewed exhibited “weak,” “poor,” or “failing” performance in regard to public transparency.

Because the companies are so large, shortcomings in their reporting pose several economic risks. At the peak of the oil price boom in 2013, there were at least 25 “NOC-dependent” countries—those where the NOC collects funds equivalent to 20 percent or more of government revenues (Chart 1). In most cases only a fraction of these resource revenues are then transferred to the governments, with the NOCs spending and investing the rest themselves. The median NOC in our sample transferred only 17 percent of its gross revenues to the state in 2015.

While NOCs are generally a substantial source of government revenue, especially in boom times, many also take on large amounts of debt. They borrow to finance new investments, meet political agendas, or maintain sizable discretionary expenditures. NOC borrowing may take the form of loans from banks (for example, the Ghana National Petroleum Corporation), oil-backed loans from other NOCs or traders (for example, Kazakhstan’s KazMunayGas), loans from another government entity (Algeria’s Sonatrach borrows from the country’s central bank), or issuance of corporate bonds (Russia’s Rosneft). Excessive debt can also create significant risks. A handful of NOCs have been carrying very large amounts of debt, including Petróleos de Venezuela, S.A., and Angola’s Sonangol—their debts exceed 20 percent of those countries’ GDP. Some NOCs are highly leveraged, such as Rosneft and the United Arab Emirates’ TAQA. But maintaining a healthy balance of debt to equity is not always enough to minimize risk. Petróleos de Venezuela is currently unable to service part of its $35 billion in debt, even though it holds much larger assets through equity. Its 335 billion barrels of oil-equivalent reserves are mostly locked underground, and the company is unable to access them amid falling production and the combined impact of an economic crisis and sanctions. In the long term, avoiding large-scale default is central to any efforts to emerge from the current crisis. Mexico’s Pemex, as another example, had more than $100 billion in debt on its balance sheet by the end of 2018, forcing the Mexican government to dip into public coffers this year to bail the company out.

In a country where the dominant NOC is essentially too big to fail, the government may ultimately be on the hook for debts the NOC has incurred, even when they are not formally guaranteed by the state. These debts are also treated inconsistently in public reporting. Public debt figures for Mexico and Venezuela include the debts of their NOCs, for example, but NOC debts are not included in national debt for Bolivia or Brazil. Moreover, our database also shows important weaknesses in public reporting. In 2013, at a time of peak commodity prices, companies responsible for 57 percent of global NOC oil and gas production did not publish independently audited financial statements.

In practice, the term “national oil company” encompasses a wide range of entities with varying roles. Some are profit seekers that prioritize commercial efficiency. Others are cash cows, focused on collecting revenues from private companies that undertake most of the operations. “State supplement NOCs” perform a wide range of public functions, including providing fuel subsidies, creating jobs, and providing social services. These categories belie the complex mandates of NOCs, many of which play multiple roles simultaneously.

Our data provide clues for mapping the roles different companies play and how well they achieve their various objectives. Building on earlier work by Nadejda Victor (2007), Chart 2 shows the productivity of labor in production terms (production per employee) and total employment figures (logged) for the NOCs in our sample for which data are available. On average, the larger the labor force, the less productive that labor force is in purely commercial terms. In addition, companies that list shares on a public stock exchange exhibit higher production per employee than unlisted counterparts of similar size. This discipline may be the result of shareholder pressure to maximize returns per employee or because listed NOCs are more likely to be profit seekers focused on commercial activities.

With the global drive to transition away from fossil fuels, NOCs from Colombia to Nigeria to Saudi Arabia have started pivoting toward renewable energy investments. Some NOCs could indeed lead their countries’ energy transitions. In many countries, NOCs employ some of the best-educated professionals and bring experience managing complicated projects with international partners. They are already integrated into the intricate set of systems that supply fuel and power. In a sense, NOCs may seem like a natural fit to drive an expansion of wind, solar, and other renewable energies.

But there are also reasons for skepticism that most NOCs will be able to transform into advocates of renewable energy. As our database reveals, selling oil and gas is still the dominant way these companies make money. In 2015, the median NOC in our sample relied on oil and gas sales for 96 percent of its total revenues. The size of the rents available in fossil fuels, the bespoke skills and technologies involved in the sector, and the entrenched political interests associated with oil all pose obstacles to NOC efforts to transform.

A parallel implication of energy transition is that it may increase the risks associated with NOC expenditures on oil exploration and production. Many countries have channeled a large share of their national wealth into their national oil companies. NOCs in Azerbaijan, Bolivia, Kuwait, Qatar, and Venezuela control more than 2.5 percent of total national wealth, a measure that combines produced capital, natural capital, human capital, and net foreign assets. And as noted earlier, many NOCs spend most of the money they collect. This approach has always come with opportunity costs. The company spends significant amounts of revenue instead of transferring it to the treasury for public sector investments, with the goal of accumulating assets and capturing a bigger share of the country’s petroleum revenues.

The resulting concentration of wealth has always alarmed economists, who don’t like to see countries put all their eggs in one basket. But the risk to NOC-dependent countries grows with the prospect that a global transition away from fossil fuels may lead to a terminal decline in oil and gas prices, which could render many of the assets in which NOCs are investing economically unviable. This makes diversification even more important, lest these countries become "stranded nations" continuing to spend heavily to maintain the sector, without a viable alternative to fossil fuel dependence.

A number of governments have relied heavily on NOCs for revenues, energy, jobs, and economic development. But many NOCs struggle with commercial inefficiencies and substantial debt accumulation, and energy transition will amplify these challenges. To mitigate the risks and carve out an effective way forward, NOC reform is an urgent priority.

NOCs and their governments should ensure that company strategies outline a sustainable vision for their futures. Such a vision can facilitate clear and effective rules on how much NOCs are allowed to spend and borrow and how much they must transfer to the government treasury.

To ensure that these rules are followed, citizens and governments need better reporting from NOCs. Separating public relations from reality in NOC pronouncements about investments in renewables or boosting commercial efficiency requires consistent reporting on spending, production costs, and revenues.

The IMF could also play a more active role by routinely requiring the disclosure of audited annual accounts for NOCs (and other large state-owned enterprises) as part of its surveillance mandate, given the fiscal risks they often present. It should also provide clearer guidance as to when countries should include NOCs in public accounts, given the multiple roles that many of these companies play.

Finally, like private oil companies, NOCs should start assessing and disclosing how prepared they are for energy transition. This should include an analysis of climate-related risks to their upstream activities and progress made in diversifying and mitigating risks.FD

DAVID MANLEY is a senior economic analyst at the Natural Resource Governance Institute (NRGI), DAVID MIHALYI is a senior economic analyst at NRGI and a visiting fellow at the Central European University’s School of Public Policy, and PATRICK R. P. HELLER is an advisor NRGI and a senior visiting fellow at the Center on Law, Energy and Environment at the University of California, Berkeley.

The risk of dependence 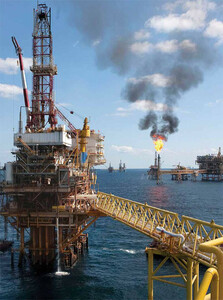 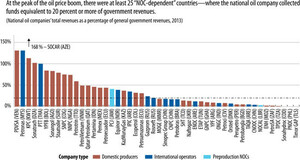 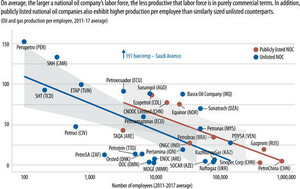