Jump to Content Jump to Main Navigation
In the Trenches Going against the Tide: Brazil’s Ilan Goldfajn explains why central bankers ought to follow their convictions
Author: Manu Bhaskaran

CENTRAL BANKS SHOULD NEVER surprise markets, so goes the cliché. But Ilan Goldfajn knows that sometimes that is exactly what is needed. In mid-2016, during his first two weeks as governor of Brazil’s central bank, markets, journalists, and commentators all believed that the country’s inflation-targeting regime would have to be adjusted, because inflation was too high. Goldfajn disagreed and stood his ground. Inflation in 2017 was 2.95 percent, a little below the tolerance margin.

Born in Israel, Goldfajn grew up in Rio de Janeiro during a time of profound economic disarray in Brazil, witnessing four currency changes in seven years and inflation upward of 80 percent a month. He earned a PhD from the Massachusetts Institute of Technology and worked with Asian countries at the IMF during the late 1990s. He was deputy governor for economic policy at Brazil’s central bank in the early 2000s and chief economist of Itaú Unibanco, Brazil’s largest bank, from 2009 to 2016, before returning as president of the central bank from June 2016 to February 2019. Recently named Credit Suisse’s new chairman in Brazil, he spoke with F&D’s Andreas Adriano about the evolution of central bank communications in recent years and the importance of knowing when to reject the consensus view.

F&D: How was it to challenge the entire economic establishment so early in your term?

IG: Sometimes you have to have conviction and go against the consensus of markets, press, and analysts. In my first two weeks as central bank governor, in 2016, there was a public debate about whether the Brazilian economy, coming from an inflation rate of 11 percent, would be able to reach the 4.5 percent target the following year. We believed it would be difficult and challenging, but possible. There was very low demand, significantly below the economy’s potential after two years of recession. It therefore seemed eminently reasonable to me that if we could coordinate expectations and change the direction of economic and monetary policy, we could reach the target. It was a wise decision: inflation in 2017 dropped to 2.95 percent, below target.

F&D: You also broke with expectations at the end of your term.

IG: By 2018, inflation was still below target. Expectations were anchored, but interest rates were rising in the United States, driving up rates in emerging economies. So it seemed that Brazil should also raise its rates. However, with the economy recovering slowly—though still below its potential—and low inflation, our framework did not recommend raising rates. For the second time, then, both at the beginning and at the end of my term, we went against the consensus.

F&D: In the end, it was about trusting your own regime, sticking to your own rules?

IG: Exactly. A lot of people said we were being too orthodox. But occasionally you need to have convictions based on the regime and on your own instincts to challenge consensus.

F&D: Both cases showed a need to communicate more proactively. How did you do that?

IG: We had a major boost in transparency, changing the monetary policy decision announcement and the minutes. We tried to communicate in simpler, more concise, and straightforward language, seeking better understanding of our actions, especially what we would do, depending on what would happen next. Inflation expectations are very important. So, if people know what you’re going to do depending on the circumstances and the fundamentals, that’s the best thing.

F&D: From Alan Greenspan’s assertion that “If I’m too clear, you’ve probably misunderstood what I’ve said” to Mario Draghi’s “We will do whatever it takes to save the euro,” how have the perceptions of what central banks can and should communicate changed?

IG: Today, most agree that transparency is desirable. The Federal Reserve has changed: we know its targets, projections, and policy intentions. It employs increasingly direct communication to influence expectations. This is true in Europe, too. We see this not only with “whatever it takes” but also with other phrases such as “We will keep interest rates low for a long time.”

In Brazil, we would warn: “We only intend to act on monetary policy if this market turbulence affects inflation expectations” or “We hope to continue our policy of monetary expansion.” Central bank transparency is fitting in a new world where information is public. No one is satisfied with just knowing the decision without understanding the rationale. It used to take a long time to get minutes out. Nowadays, in Brazil, the monetary policy decision comes out on a Wednesday and the minutes on the following Tuesday morning.

F&D: Has this changed your work as governor— did you have to talk to more people, different stakeholders?

IG: Not only your words, but also your life is under scrutiny 24 hours a day. You can never afford to be a private citizen and speak your mind, even among close friends or family. Because information flows, you have to be careful about every action and respect public resources, like the driver or the plane. You must get in line and take a commercial flight like everyone else. When you’re in the middle of a crisis, people will look at you and say, is he nervous or not, has he gained weight or not?

F&D: Isn’t it a surprise that at the same time central bank independence is being challenged in so many countries?

IG: In some ways, the perception that central banks are a powerful crisis-fighting tool puts pressure on them to do more. Everyone would like to see us stimulate the economy more and avoid crises and market turmoil. In advanced economies, unconventional policies were needed because the global financial crisis was unconventional, but many politicians questioned what was done.

F&D: What challenges does a dual mandate—such as the Fed’s twin goals of low and stable inflation and full employment—pose for central banking?

F&D: So, in practice, there is already a dual mandate.

IG: Yes, but most central banks understand that long-term growth is beyond their mandate. It depends on productivity, education, investment, and other real economy factors beyond their performance. When I say the central bank takes these things into account, I mean these short-term trade-offs between inflation and other economic dimensions. It should not be confused with increasing long-term growth. The central bank contributes through stability, but more stimulus won’t generate more productivity.

F&D: Is there too much worry about exchange rate depreciation, especially in emerging market economies?

IG: When there is turmoil, there are always pressures, and the central bank and treasury must know how to deal with them. There is a role for the central bank in dealing with disorderly market conditions and helping markets function better. Apart from that, it is important to let the exchange rate fluctuate in a way that reflects the fundamentals and the shocks. Policymakers must be able to distinguish when it deserves special attention and when it should be left on its own. Every policymaker is always searching for a framework to determine when to intervene and when to allow the exchange rate to reflect the current economic reality. FD 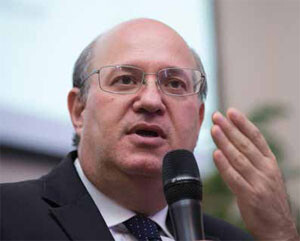