Without major and urgent efforts to slow accumulation of carbon dioxide (CO ) and other greenhouse gases in the atmosphere, future generations will inherit a much warmer planet with risks of dangerous climate events, higher sea levels, and destruction of the natural world.

The international community’s response is grounded in the 2015 Paris Agreement, which has the key objective of limiting future global warming to between 1.5 and 2˚C above pre-industrial levels. One hundred ninety parties submitted climate strategies for this agreement, almost all of which include mitigation commitments. A typical pledge among advanced economies is to reduce emissions by 20–40 percent by 2030 relative to emissions in a baseline year. These pledges are voluntary, but participating parties are required to submit updated pledges every five years starting in 2020 and to routinely report progress on implementing them. For this international response to work, policymakers need carefully crafted measures that effectively meet their mitigation commitments while at the same time limiting the burdens on their countries’ economies and navigating the political obstacles to implementation. Even if successfully implemented, however, current country pledges would cut global emissions by only about one-third of the amount required to meet climate stabilization goals. Innovative mechanisms are therefore needed to scale up mitigation efforts at the international level.

The case for carbon taxation

Carbon taxes are charges on the carbon content of fossil fuels. Their principal rationale is that they are generally an effective tool for meeting domestic emission mitigation commitments. Because these taxes increase the prices of fossil fuels, electricity, and general consumer products and lower prices for fuel producers, they promote switching to lower-carbon fuels in power generation, conserving on energy use, and shifting to cleaner vehicles, among other things. A tax of, say, $35 a ton on CO emissions in 2030 would typically increase prices for coal, electricity, and gasoline by about 100, 25, and 10 percent, respectively. Carbon taxes also provide a clear incentive for redirecting energy investment toward low-carbon technologies like renewable power plants.

A $35 per ton carbon tax by itself would exceed the level needed to meet mitigation commitments in such countries as China, India, and South Africa, and it would be about right to meet pledges in Indonesia, the Islamic Republic of Iran, Pakistan, the United Kingdom, and the United States. But even a carbon tax as high as $70 per ton (or equivalent measures) would fall short of what is needed in some countries like Australia and Canada (Chart 1). These findings reflect differences not only in the stringency of commitments, but also in the responsiveness of emissions to taxes: emissions are most responsive to carbon pricing in countries consuming a great deal of coal, such as China, India, and South Africa.

Another important argument for carbon taxes is that they could raise a significant amount of revenue, typically 1–2 percent of GDP for a $35 a ton tax in 2030 (Chart 2). Using this revenue productively to benefit a country’s economy could help offset the harmful macroeconomic effects—reduced employment and investment—of higher energy prices. For advanced economies, for example, the revenue might be used mostly to cut taxes on labor and capital income, implying a retooling of the tax system rather than an increase in the overall tax burden. For developing countries unable to mobilize adequate revenue from broader taxes because a substantial portion of economic activity occurs in the informal sector, carbon tax revenues might be used mostly to fund investments for achieving the United Nations Sustainable Development Goals. In all countries, use of some revenues to fund clean-energy infrastructure upfront could enhance carbon pricing’s effectiveness and credibility.

A third rationale for carbon taxes is that they can generate significant domestic environmental benefits— for example, reductions in the number of people dying prematurely from exposure to local air pollution caused by fossil fuel combustion.

Finally, carbon taxes are straightforward to administer. Carbon charges can be integrated into existing road fuel excises, which are well established in most countries and among the easiest of taxes to collect, and applied to other petroleum products, coal, and natural gas. Another option is to integrate carbon charges into royalty regimes for extractive industries, though rebates should be provided for exported fuels as, under the Paris Agreement, countries are responsible only for emissions within their own borders.

An alternative way to price carbon emissions is through emission-trading systems in which firms are required to acquire allowances to cover their emissions, the government controls the total supply of allowances, and trading of allowances among firms establishes an emission price. To date, trading systems have been mostly limited to power generators and large industry, however, which reduces their CO2 reduction benefits by 20–50 percent across different countries compared with more comprehensive pricing. It also limits potential revenues from auctioning allowances (similarly carbon taxes, like other types of taxes, often include exemptions). And although trading systems provide more certainty in respect to future emissions, they provide less certainty regarding emission prices, which might deter clean-technology investment. They also require new administration to monitor emissions and trading markets and significant numbers of participating firms, which may preclude their application in small or capacity-constrained countries.

Although nearly 60 carbon tax and trading systems are in operation at the national, subnational, and regional levels in various countries, the average price of emissions worldwide is only $2 a ton—a small fraction of what is needed. This underscores the political difficulty of ambitious pricing. Where carbon pricing is politically constrained, policymakers could reinforce it with other approaches that do not impose a new tax burden on energy and therefore avert large increases in energy prices.

A more traditional approach would be to use regulations to control things like products’ energy efficiency or power generators’ emission rates. In fact, a comprehensive package of regulations could mimic many, though not all, of the behavioral responses resulting from carbon pricing: regulations cannot encourage people to drive less or turn down the air conditioner, for example. Regulations also tend to be inflexible and difficult to coordinate cost-effectively across sectors and firms.

A more promising and novel alternative to regulations is revenue-neutral “feebates,” which provide a sliding scale of fees for products or activities with above-average emissions intensity and rebates for those with below-average intensity. If feebates were applied to power generators, for example, producers would be paying a tax in proportion to their electricity output times the difference between their CO2 emission rate per kilowatt hour of generation and the industry-wide average emission rate.

Previous experiences with carbon pricing and broader energy-pricing reform across many countries suggest some strategies for enhancing their acceptability. For example, pricing can be phased in progressively to allow businesses and households time to adjust. And an up-front package of targeted assistance, which need use only a minor fraction of the carbon-pricing revenues, can be provided for vulnerable households, firms, and communities through, for example, stronger social safety nets and worker assistance programs.

Especially important is to use the bulk of the revenues from carbon pricing transparently, equitably, and productively. A $70 a ton carbon tax in Canada and the United States and a $35 a ton tax in China and India would impose, through their impact on the price of energy and general consumer goods, extra bills for the average household of about 2 percent of their consumption in 2030. But if, for example, transfer payments were used to compensate the bottom 40 percent of households for the burden of higher prices, and the remaining revenue (about 70 percent) was used to benefit the country’s economy through broad income tax reductions or increases in productive investment, then the bottom 40 percent of poor households in all four countries would be better off overall, while the average overall burden on higher-income households would be pretty modest, at about 1–2 percent.

By comparison, a package of feebates designed to deliver the same economy-wide emissions reductions as the tax would impose a burden on all households, but this burden would typically amount to less than 1 percent of consumption. In short, carbon mitigation policies need not impose heavy burdens on broad household groups. Communicating this message clearly to the public may help lessen public opposition to reform.

At the international level, a carbon price floor arrangement among heavily emitting countries could strengthen and reinforce the Paris Agreement mitigation process. Such an arrangement would guarantee a minimum level of effort among participants and provide some reassurance against losses in international competitiveness. Coordination in regard to price floors rather than price levels would allow countries to exceed the floors, if necessary, to meet their Paris Agreement mitigation pledges. And the floors could be designed to accommodate carbon taxes and emission-trading systems as well as other approaches like feebates that achieve the same emission outcome as would have occurred under the floor price.

There are some monitoring challenges—for example, countries would need to agree on procedures to account for possible exemptions in carbon-pricing schemes and changes in preexisting energy taxes that might offset or enhance carbon pricing’s effectiveness. But these technical challenges should be manageable.

Given their lower per capita income and smaller contribution to historical atmospheric greenhouse gas accumulations, a case can be made for emerging market economies to have a lower price floor requirement than advanced economies. For illustration, if advanced and developing G20 economies were subject to carbon floor prices of $70 and $35 a ton of CO , respectively, in 2030, mitigation effort would be well over twice as much as reductions implied by meeting current mitigation pledges. To reduce emissions to a level consistent with a 2°C target, however, additional measures—equivalent to a global average carbon price of $75 a ton—would still be needed.

Just three countries—China, India, and the United States—account for about 80 percent of the low-cost mitigation opportunities across G20 countries, so a pricing arrangement among these three countries alone would be a huge step forward and should catalyze action elsewhere. That may seem wishful thinking right now—for example, the United States is set to withdraw from the Paris Agreement in 2020; coal is entrenched in India because of history, large reserves, and existing infrastructure; and China’s nationwide trading system, slated for introduction in 2020, will likely have limited coverage and ambition.

Nonetheless, there are some grounds for optimism. For example, fiscal consolidation measures will likely be needed at some point in the United States given the longer-term budget outlook, and carbon taxation may be easier to stomach than raising taxes on businesses and households or cutting entitlements.

More immediately, there is much debate (in the United States and elsewhere) about the possibility of a Green New Deal to rapidly decarbonize economies, and carbon pricing could play a pivotal role in that. Carbon pricing is in China and India’s interests when the benefits from reduced air pollution mortality are considered: a $35 a ton carbon tax in 2030 would save an estimated 300,000 premature deaths a year in China and an estimated 170,000 in India. And it is in all countries’ interests to see effective mitigation at the international level to stabilize the global climate system, avoid climate-related damages at the domestic level, and safeguard the environment for future generations. HD 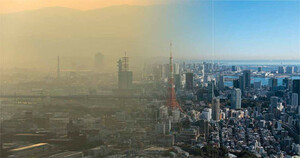 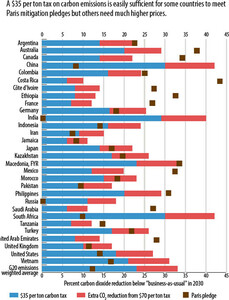 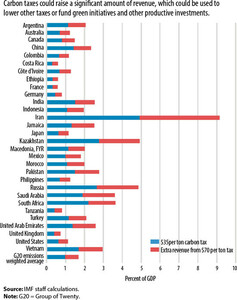