Jump to Content Jump to Main Navigation
Back to basics: Does a Minimum Wage Help Workers?
Author: Piyaporn Sodsriwiboon and Gabriel Srour1

An overly generous wage may prompt employers to cut jobs

ALMOST EVERY COUNTRY has a minimum wage. The details vary: some countries, such as France, fix a universal minimum across the economy, while others, such as New Zealand and South Africa, differentiate between sectors and types of workers. Typically, the minimum wage is set by the government and revised periodically in consultation with business and labor organizations (see chart).

Minimum wages have been justified on moral, social, and economic grounds. But the overarching objective is to boost incomes and improve the welfare of workers at the low end of the ladder, while also reducing inequality and promoting social inclusiveness. Critics counter that rather than improving welfare, minimum wages are counterproductive because they disrupt the market for labor. They argue that there are other, better-targeted, and less distortionary ways to provide social assistance.

So does an increase in the minimum wage actually benefit low-income workers? It depends.

First, employers may not comply with the minimum wage law. If no one actually receives the minimum, or if the law is mostly on paper, it is irrelevant. For example, in countries with large shadow economies, employers often give workers under-the-table wage supplements, sometimes known as “envelope payments,” to evade taxes or the cost of providing benefits. In this situation, the employer could react to an increase in the minimum wage by reducing envelope payments, leaving overall compensation unchanged. Employers might also underreport the number of hours employees worked, also leaving total pay unchanged. Or the employer might not report employment at all, evading the minimum wage law entirely.

Second, even when minimum wage regulations are fully respected, additional earnings may face heavy social security and labor taxes, reducing the impact of an increase on take-home pay. Finally, employers may offset higher minimum wages by reducing benefits or hours or laying off workers to cut costs.

The potential impact on employment is at the core of the debate on minimum wage policy and remains a contentious subject. On the one hand, in competitive markets, if the minimum wage is enforced and raises wages above the prevailing levels, some companies will be unwilling to pay the higher wage and will lay off workers. On the other hand, markets may not be competitive. For instance, a company that is the sole employer in a particular market may be able to impose lower wages than would prevail under competition. In this case, a minimum wage can raise the incomes of workers without reducing employment. Indeed, the higher wages may attract more workers and hence raise employment.

Research spanning several decades has not settled the debate. Some studies find that the minimum wage has significant benefits for workers; others conclude that it is harmful. Many studies have been inconclusive.

Even so, there appears to be a growing consensus that when the minimum wage is set at a moderate level, the impact on employment is modestly negative. Recent research generally concludes that the change in employment caused by an increase in the minimum wage is close to zero, although more vulnerable groups, such as low-skilled and young workers, may be hurt. A plausible explanation for the modest employment effects is that at moderate levels, minimum wages account for only a small share of an employer’s total costs, so firms can absorb the increase in a variety of ways other than by cutting payrolls. Options include reducing nonwage costs, raising prices, boosting productivity, and accepting lower profits.

Another prime motivation for minimum wage policies is to reduce income inequality by improving the lot of those at the bottom of the wage distribution. Empirical studies show that minimum wage hikes do tend to narrow wage disparities, but only as part of a broader policy effort toward significant poverty alleviation.

Still, there are limits to what minimum wages can achieve. Those that are set too high can cause significant job losses and hence have perverse distributional effects. As low-income earners lose their jobs, inequality will widen. Furthermore, minimum wage increases can pump up the overall wage structure, leaving income disparity unchanged because firms want their more productive workers to be better compensated.

What is the appropriate level?

OK, let’s assume that low minimum wages are beneficial and that those that are high are harmful. What then is the optimal level? Few studies address this question head-on, but those that touch on it put the ideal level somewhere between 25 and 50 percent of the average wage. In practice, minimum wage policies should be calibrated to keep overall wage growth in line with productivity gains. This argues for taking the minimum-wage-setting process out of the hands of politicians and delegating it to independent experts. FD 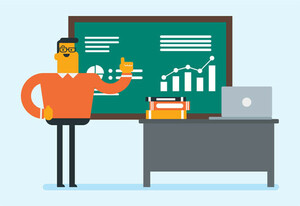 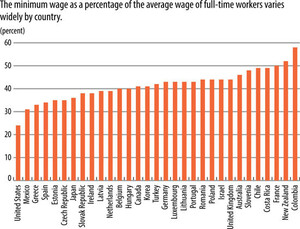