Jump to Content Jump to Main Navigation
On the Move
Author: JIA FENG

Migration, with its upsides and downsides, is increasing globally.

MODERN TRANSPORTATION and digital technologies make it easier for people to move across borders. Around the world, 258 million people, or 3.4 percent of the global population, live outside their country of birth. The international migrant population is now triple its 1970 level. International migration takes different forms: economic migrants voluntarily leave in search of work, while refugees are forced to fee due to conflict and violence. Migration can be an economic boon, but it can also be a critical policy and political challenge.

Work is the main motivator. Migrant workers comprise two-thirds of all international migrants, and most move to high-income countries. For these individuals and their families, migration can bring considerable gains in income, education, and health. For their home countries, emigration can reduce unemployment and foster knowledge transfer. The remittances migrants send home—$613 billion in 2017—provide financial flows and a stable source of income. For destination countries, immigration can increase labor supply, enhance productivity, and ease pressures on pension systems.

Not all migration occurs in positive circumstances. Conflict and persecution uprooted 68.5 million people by 2017—including 25.4 million refugees, 3.1 million asylum seekers, and 40 million people displaced within their countries— a level not seen in decades. More than half the refugees were children, many unaccompanied or separated from their parents. A third of all refugees fed to the least developed economies, where the capacity to accommodate and integrate them often falls short.

Migration matters to economic prosperity, human development, and security, and ensuring safer and better-regulated migration has become a global priority. The United Nations, for example, is set to adopt two global compacts to improve the governance of migration. One thing is clear: no country can manage migration issues on its own. Cross-border challenges require cross-border solutions. FD

68% of all refugees in 2017 came from just five countries: Afghanistan, Myanmar, Somalia, South Sudan, and Syria.

85% of all refugees in 2017 fed to developing economies, including Iran, Lebanon, Pakistan, Turkey, and Uganda.

International migration on the rise

Migration can be a boon …

… but it can also be a challenge 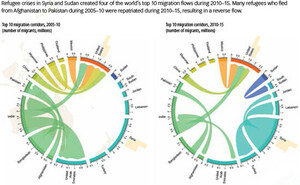