“MONEY MAKES THE world go around,” Liza Minnelli famously sang in the movie Cabaret. Money has for centuries been central to human relationships. Loss of faith in its value can result in economic and political instability, even war. In the past few years, financial technology—fintech for short—has caught the world’s imagination by offering alternatives to traditional means of payment. Will digitalization redefine money? We explore the possible consequences, good and bad.

Traditionally, money has always been an expression of sovereignty, writes Harold James of Princeton University—even if states at times failed spectacularly to guarantee its value. Today, most experts agree that so-called cryptocurrencies do not possess all the core attributes of money. But they also believe that distributed ledger technology (which underpins such assets) has the potential to transform payment services by removing the need for an intermediary. This would reduce the role of central banks and weaken state authority over the money supply. Indeed, that was the political motivation behind Bitcoin, the first decentralized digital currency.

Swedish central bank governor Stefan Ingves points out that, at present, only 13 percent of transactions in his country are settled with cash. If banknotes and coins have had their day, then soon the public will no longer have access to a state-guaranteed means of payment. That is, unless central banks redefine their role. One possibility would be for central banks to issue their own digital tokens—a solution that would require careful consideration of choices and policy trade-offs, says the IMF’s Dong He.

Worries about the misuse of financial technology should be weighed against its potential benefits to society. IMF Managing Director Christine Lagarde offers the following advice: “Above all, we must keep an open mind about crypto assets and financial technology more broadly, not only because of the risks they pose, but also because of their potential to improve our lives.” FD

Money is something that holds its value over time, can be easily translated into prices, and is widely accepted. Illustrator Michael Waraksa’s June 2018 cover depicts its evolution. With digitalization, money may be entering a new era. 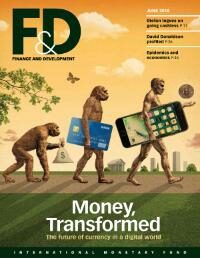 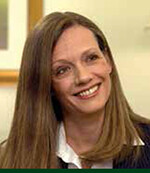 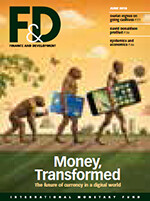 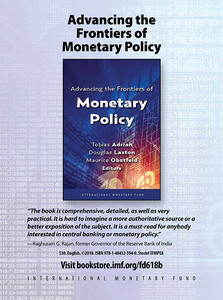