Jump to Content Jump to Main Navigation
Currency Notes: The Future Is Plastic - For countries concerned about the environmental impact of their currency, a switch to polymer notes makes sense
Author: Mr. Ping Wang1

As countries sign on to the Paris Agreement on climate change and strive to become more sustainable, many are considering the environmental impact of their currency as well as its durability and security.

Money has been made from a variety of materials over the years—from leather in China during the Han Dynasty, to shells, precious metals, cotton paper, and most recently, plastic. The materials reflect the social and political climate of the time as well as available technologies and resources.

For centuries, people in China used precious metal coins strung together through a center hole to conduct transactions. But with larger commercial transactions in the 7th century, there was a move to the easier-to-transport paper currency. In the 13th century Marco Polo reported back to Europe from his travels on the use of paper rather than coins, and Europe’s earliest modern paper banknotes were issued by the Bank of Stockholm in 1661.

Paper quickly became the currency of choice around the world and remained so for centuries. But with recent technological developments, plastic film notes offer additional security features along with longevity and energy efficiency.

Polymer banknotes were first issued in 1988 by Australia, which now uses polymer exclusively and is about to launch a new series of notes, starting with the $5 bill in September. Polymer is now used in over 20 countries as diverse as Australia, Canada, Fiji, Mauritius, New Zealand, Papua New Guinea, Romania, and Vietnam.

The Bank of Canada began its move to polymer banknotes in 2011, after assessing the environmental impact of producing paper and plastic bills. A life-cycle assessment examined the effect—including primary energy demands and the potential for global warming—of each stage of production, from growing the cotton to produce the banknote paper or producing the raw material for polymer notes through the destruction and disposal of worn notes.

In all categories and phases, polymer outperformed paper. For example, the study found, a polymer bill promises a 32 percent reduction in global warming potential and 30 percent reduction in primary energy demand compared with paper. Most important, polymer notes last more than twice as long as paper notes—and higher denominations, which are handled less frequently, last even longer. This means fewer polymer notes have to be manufactured and distributed over the life of a series. And polymer notes weigh less than paper ones, so even their transportation and distribution are easier on the environment.

At the end of their life, paper bills are usually shredded and relegated to a landfill. But polymer notes taken out of circulation are shredded, converted into pellets, and used to make everyday plastic items such as lawn furniture.

The Bank of England spent three years studying the potential effect of a switch from cotton and linen paper notes and concluded as well that plastic was the way to go. A polymer £5 note featuring Sir Winston Churchill will launch in September 2016, followed by a £10 Jane Austen note in late 2017 and a £20 note by 2020.

On announcement of the U.K. move, Bank of England Governor Mark Carney said, “The quality of polymer notes is higher, they are more secure from counterfeiting, and they can be produced at lower cost to the taxpayer and the environment.”

Ordinary users have mixed reactions to the bills’ plasticky feel. Zoë Martin, a tutor in Toronto, Canada, says, “They stick to each other because of static cling, they don’t fold up nicely like paper bills when they’re new, and they’re slippery so they slide out of your pocket.” But Michael Brienza, a Toronto day care teacher, says, “I prefer them; they’re so much cleaner. The paper bills got all grimy.” And Peter Cecil Sinnott, a data science graduate of Montreal’s McGill University, says, “The fact that they’re waterproof means getting them wet isn’t going to cost you. True story: my sister once found one of the new Canadian $100 bills while snorkeling in the tropics. Who knows how long it was sitting on that reef?”

To paraphrase Mr. McGuire’s advice to Benjamin in the movie The Graduate, whether people like it or not, “the future is plastic.”

The life cycle—production, transportation, and eventual disposal—of the 3 billion paper euro banknotes produced in 2003 alone has the environmental effect of driving a car around the globe 9,235 times 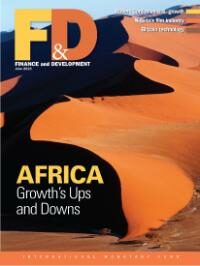 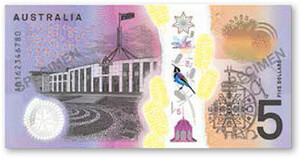 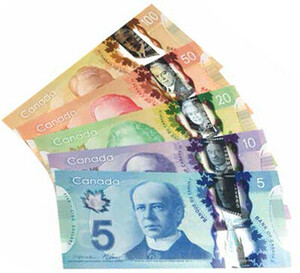 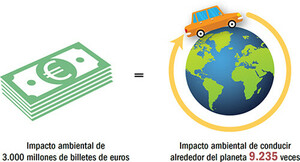