Long before the current enthusiasm about solar photovoltaics and other renewables, a seemingly magical technology turned yellow dust into electricity. In 1942, on an abandoned squash court at the University of Chicago, the Italian physicist Enrico Fermi demonstrated that electricity could be generated using a self-sustaining nuclear reaction. In the early decades, it was expected that nuclear power would be “too cheap to meter”—a cleaner, modern alternative to the fossil fuels of the day.

Worldwide, over 400 reactors are operating on five continents. The regions with the largest nuclear fleets are western Europe (led by France) and North America (led by the United States), but Asia also has a significant number of plants—largely in China, Japan, and Korea. Overall, 31 countries are home to an operating reactor.

At the same time, nuclear power has not been everything it was expected to be. Fermi’s original nuclear experiments were financed on a shoestring budget, but it has proved remarkably difficult to scale up this technology cheaply enough to compete with fossil fuels. And, today, there is great uncertainty about the future prospects for nuclear power. While some countries, notably China, are expanding their fleet, public pressure has led Germany to phase out its reactors.

Understanding the economic and regulatory forces at work in this evolving outlook has never been more important. The nuclear disaster in Fukushima, Japan, highlighted the inherent risks of nuclear power. Still, with the approaching climate negotiations in Paris, it is particularly timely to consider the future role of nuclear energy.

It makes sense that many nuclear supporters see a key role for nuclear power in addressing climate change. A single pound of uranium produces as much electricity as 16,000 pounds of coal. And while nuclear power is virtually emission free, burning coal and other fossil fuels generates carbon dioxide, sulfur dioxide, nitrogen oxides, and mercury.

How much carbon dioxide are we talking about? Consider the following. If all currently operating nuclear plants were replaced with fossil fuels, carbon dioxide emissions would increase by 2 billion metric tons a year. This is slightly less than the total carbon dioxide emissions of Germany, France, Italy, and the United Kingdom combined. While wind and solar energy are increasing around the world, they do not provide the reliable capacity required to fill this gap.

Despite increased attention to climate change, relatively few new nuclear plants have been built during the past three decades. Construction boomed first in western Europe and in North America back in the 1960s and 1970s (see chart). Many of these projects took well into the 1980s to finish, but since 1990 there has been relatively little new construction.

Nuclear construction surged again in 2008 and 2009, and has continued despite the Fukushima accident in 2011. Currently, 70 nuclear reactors are under construction worldwide, about one-third of the construction volume at the peak in the late 1970s. Of these, 46 are in Asia, 15 in eastern Europe and Russia, and 5 in the United States. The biggest driver is China, with 26 reactors under construction and plans to begin construction on dozens of additional projects over the next decade.

Why are we not building more plants? Probably the most important explanation is construction costs. Building a nuclear power plant requires highly skilled, highly specialized architects and engineers to manage all stages of design, construction, assembly, and testing. And the sheer size of nuclear power plants means that most components must be specially designed and built, often with few suppliers worldwide. Moreover, the long time required for construction means that financing costs are substantial.

Nuclear plants have always been expensive to build. But recent experience suggests that construction costs may have actually increased. As part of the recent surge in building, construction was started on two “next generation” reactors to be built by the French company Areva in Olkiluoto, Finland, and Flamanville, France. These new plants were expected by many nuclear proponents to usher in a new era of European nuclear reactor construction. Instead, both projects have been plagued with problems and delays. Construction costs at both sites are now expected to be more than triple the original estimates. Similarly, a new plant at Hinkley Point in southwest England is just beginning construction, but is already years behind schedule and expected to cost at least $25 billion.

These cost overruns provide a vivid reminder of some of the challenges that can occur during construction. Most recently, Areva discovered problems with the quality of the steel used in the French plant’s reactor vessel. Nuclear power plants must meet such strict safety requirements that it is almost inevitable that there will be some delays and cost overruns.

The hope has always been that learning-by-doing would bring down nuclear construction costs. The idea is that the more you build, the cheaper it becomes. The empirical evidence for this is mixed, but it is probably not a coincidence that the lowest reported construction costs in the world today are in China, where nuclear capacity is growing the fastest. An important priority for the nuclear industry is to study these new Chinese builds closely to understand how they have been able to reduce costs.

But it still won’t be easy for nuclear power. In addition to high construction costs, nuclear power faces other significant challenges. In North America, for example, natural gas is so cheap it makes it hard to justify any other type of power plant. You can build a nuclear plant and sell electricity around the clock, but still not make enough profit to pay for the plant.

In North America, even existing nuclear plants are struggling financially. Since 2010, five U.S. reactors have closed. Two additional plants have announced early closure, with one announcement as recently as October 2015. For the latter two cases, the operators cited a poor economic outlook as a driving factor in the decision to close early. Analysts have projected potential closures at other plants, with cheap natural gas the real stumbling block.

And of course, for any existing or new nuclear plant, much hinges on public opinion and the social license to operate. Declining public support since Fukushima, continued concerns about storage of spent fuel, declining costs of renewable generation, and the lack of a global price on carbon emissions have all contributed to a substantial headwind for nuclear power.

Is the world headed for a nuclear renaissance, with China leading the way? The turning point many have hoped for is not yet here. Construction costs are still too high and alternative technologies too cheap, and there is insufficient global commitment to reducing carbon dioxide emissions. A confluence of factors could make nuclear power a viable economic option. Otherwise, nuclear power will fall over time as a fraction of electricity generation.

Construction of nuclear reactors peaked in the late 1970s. 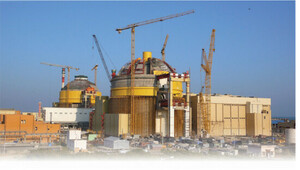 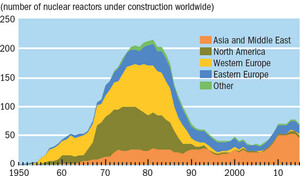