Jump to Content Jump to Main Navigation
Four Years after the Spring: Despite progress, the Arab countries in transition still must correct some fundamental weaknesses in their economies
Author: Mr. Adnan Mazarei and Mr. Tokhir N Mirzoev

Four years ago, millions of Arab people filled the streets demanding political, social, and economic justice. It caught everyone by surprise. The Arab Spring unveiled significant economic weaknesses previously masked by years of economic and political stability. Underneath, despite seemingly improving poverty and inequality indicators and some progress with structural reforms, high unemployment, poor living conditions, and lack of economic opportunity had stirred a pot of frustration and dissatisfaction throughout most of the Arab world.

The Arab Spring made it clear that the economic framework and institutions in the Arab countries in transition (a term used by the international community to include Egypt, Jordan, Libya, Morocco, Tunisia, and Yemen) needed to change. Since then, there has been some progress, but the core structural weaknesses in these countries’ economic frameworks have yet to be addressed. Although the region is now hostage to a number of conflicts, it is important to start chipping away at the task ahead.

A key weakness of the Middle East and North Africa (MENA) region, including the Arab countries in transition, has been its relative isolation from the global economy and fragmentation as a region due to high barriers to trade and monopolistic markets. The MENA region holds less than 1 percent of the world market share in nonfuel exports—far below east Asia’s 10 percent and Latin America’s 4 percent—and less than a tenth of these exports are destined to stay in the region (Malik and Awadallah, 2013). Such seclusion in this age of globalization has meant slow economic modernization, limited transfer of technology, and, ultimately, low competitiveness and productivity.

Despite increased economic liberalization, the legacy of the economic development models of the 1960s and 1970s, which favored a large role for the state, lingered in various forms. Large and inefficient public enterprises and bloated civil services stifled the development of the private sector. More important, countries could not provide their people with adequate services despite their large public sectors. According to the United Nations Development Programme’s index of “multi-dimensional poverty,” well over a third of the people in these countries lacked access to health care, education, and other basic services such as sanitation, clean water, and electricity—trailing most of the rest of the world. By contrast, 26 percent of people in developing Asia and about 8 percent in Latin America lacked these basic services (IMF, 2014a).

Social protection before the Spring was inadequate. As in most of the MENA region, in the Arab countries in transition generalized price subsidies were part of the social contract between the government and the people. These subsidies, however, did not always go where they were most needed: for example, in Egypt in 2008 the poorest 40 percent of the population received only 3 percent of gasoline subsidies (Sdralevich and others, 2014). In many other countries, the share of public resources devoted to subsidies was among the highest in the world, which prevented more productive uses, such as investment in education and vocational training for the young—and left the poor vulnerable.

Each country must develop its own vision and path to reform.

More generally, governance in the Arab countries in transition was weak, and mostly deteriorated in the decade before the Arab Spring (see Chart 1). Combined with the factors mentioned above, the weak institutional framework opened the door for corruption and shaped an economic environment that stifled competition and discouraged job creation in the private sector. This deprived millions of young and talented people of economic opportunity and jobs.

As a result, unemployment in these countries remained among the highest in the world, particularly for women and young people, of whom one in four was jobless. Similarly, access to finance was among the lowest worldwide. For example, less than 4 percent of the region’s population was able to obtain a loan from a financial institution in 2010. This was less than half of the world average and comparable only to sub-Saharan Africa.

During the years leading up to the Arab Spring, the disconnect between macroeconomic indicators and a sense of well-being at the household level widened. According to Gallup, a 34 percent increase in GDP per capita in Egypt between 2005 and 2010 coincided with a sharp decline in the number of people who said they were “thriving,” from almost one-third of the population to 12 percent (Clifton and Morales, 2011). In Tunisia, the drop was 10 percentage points, to a dismal 14 percent, between 2008 and 2010.

How have these economies performed since the onset of the Arab Spring? Are there new visions for economic institutions and policies?

The movement started when the world had not yet recovered from the global financial crisis. This unfavorable external environment, combined with domestic economic dislocations, social tensions, and—more recently—spreading conflicts in the region, has dampened economic performance, reduced trade and investment, and heightened vulnerability.

Despite a shaky start, these countries have maintained macroeconomic stability and avoided economic crises that could have hurt their most vulnerable citizens. At first, this was achieved at the cost of depleting foreign exchange reserve buffers and accumulating public debt via widening deficits, notably in Egypt and Jordan. Subsequently, with greater domestic political stability and external aid, most countries have gradually rebuilt their external reserve buffers and begun to reduce their budget deficits. These early achievements helped countries maintain positive economic growth. The recent conflicts in Libya and Yemen could, however, derail progress and set those countries back many years.

The Arab countries in transition have made some—albeit uneven—progress with structural reforms. Energy subsidies were significantly reduced in Egypt, Jordan, Morocco, and Yemen, making way for spending on better-targeted social protection and on growth-enhancing public investment. Governments have also taken steps to improve aspects of the business climate, such as competition, bankruptcy, and investment regulations; strengthen tax policies and administration; and implement financial sector reform. And plans are in the works to stimulate job creation and reduce skills mismatches in the labor market—which has led to some improvement in business climate indicators.

These are steps in the right direction, but it will take more than this to fundamentally change the structural deficiencies of these transition economies. Specifically, dependence on the public sector is still high, and the private sector is still reluctant to invest and create jobs. Governance continues to present a significant concern. Well-targeted social safety nets are not yet in place, and access to basic services remains inadequate. Consequently, economic outcomes at the household level have not improved, and in some cases have worsened since 2011.

These outcomes point to persistent, if not growing, challenges. These sources of distress will likely continue to fuel social discontent and could significantly undermine public sector reforms and the private sector’s response to them.

Escaping the pre-2011 legacy is critical for the success of the Arab countries in transition. They must speed up and intensify structural reforms to maintain macroeconomic stability and achieve high, sustainable, and inclusive growth. The structural weaknesses that caused the divide between general macroeconomic indicators and living conditions in these countries cannot be ignored. In all countries, this will involve ambitious governance reforms, building an enabling favorable business environment, moving from state-dominated to private investment, increasing access to finance, implementing labor market and education reforms to stimulate employment, forming efficient social safety nets to protect the vulnerable, and reducing trade barriers to smooth integration into the world economy (IMF, 2014b).

Each country must develop its own vision and path to reform. The task will be even more difficult than before the Arab Spring. Governments have limited financial resources, and the external environment is overshadowed by conflicts in the region and little appetite for investment, despite the relief offered by lower international oil prices. Overcoming past resistance to reform calls for political will and determination, and strong support from the international community.

Adnan Mazarei is a Deputy Director, and Tokhir Mirzoev is a Senior Economist, both in the IMF’s Middle East and Central Asia Department.

Most Arab countries in transition have not seen much improvement in governance indicators since the Arab Spring.

The Arab countries in transition lagged the rest of the world in per capita income growth. 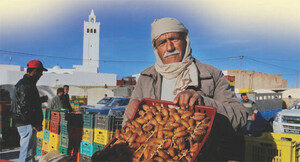 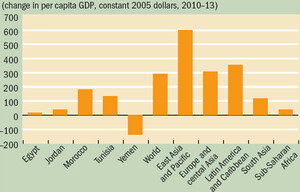 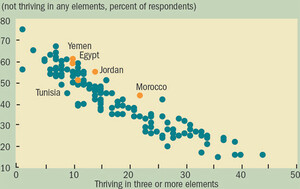