Over-The-Counter trading of derivatives—financial instruments that are linked to, among other things, other securities, indices, indicators, commodities, and even other derivatives—caused, or at least exacerbated, the recent global financial crisis, according to one popular but far from universally accepted story line.

But whether or not over-the-counter derivatives were a major culprit in the global crisis, few analysts would disagree that these markets—where the instruments are traded directly between two parties rather than on an exchange—have grown so much in size and importance that they need to be brought into the open and more tightly regulated.

At their 2009 Pittsburgh Summit, leaders of the Group of 20 advanced and emerging market economies (G20) called for a major overhaul of these markets, which was to have been completed by the end of 2012. The reforms are supposed to make derivatives trading safer and more transparent (by enabling authorities and investors to gauge buildups of pressure that could spill out and cause broader financial problems).

But more than two years after the deadline, no jurisdiction has fully implemented any of the reforms, and some countries haven’t even started. The reforms backed by the G20 include changing the way each side (collectively called the counterparties) in most derivatives contracts deals with the other. Instead of a purely bilateral relationship, the G20 want one in which a central counterparty is interposed between the two parties in a process called central clearing. The G20 also called for moving over-the-counter trading in many derivatives to exchanges or electronic trading platforms (Internet-based systems for trading financial instruments). For contracts not centrally cleared, G20 leaders proposed higher bank capital requirements.

The reforms have been delayed in many cases because the legislative and regulatory processes required to implement them—including cross-border coordination—turned out to be more complex than anticipated. Some countries are hanging back until Europe and the United States make and mesh their reforms. This article assesses the status of the reform process and the cross-border frictions that have arisen.

Many flavors and risks

Derivatives come in many varieties, depending on what their value is linked to and their structural features. At their most basic, they are contracts, such as forward and futures contracts, that allow a counterparty to buy or sell an asset—wheat, foreign exchange, oil—at a specific price at a certain time to lock in future prices or rates of exchange. But some derivatives are complicated options contracts with numerous, sometimes overlapping and conditional, triggers and outcomes.

Derivatives can play a useful economic role. For example, firms and governments use derivatives called swaps to expand investment and borrowing opportunities and make their revenue and expenditure more predictable. Natural resources firms and farmers can lock in prices with commodity forward contracts. Airlines rely on energy-based derivatives to hedge against fuel price volatility. These types of end-user activities comprise the majority of trading in the almost $700 trillion market (see chart).

The vast majority of derivatives are traded over the counter (see table) when trading volume is measured by notional amounts outstanding. The notional amount is the value of the principal underlying the derivative contract, which is usually controlled by a much smaller up-front payment that is normally specified as a percentage of the notional amount. The notional amount also reflects the amount and price of assets to be delivered in the case of futures and forward contracts. For example a forward contract that calls for delivery of 10,000 gallons of jet fuel at $3 a gallon locks in the purchase price at $30,000 regardless of what happens to fuel prices over the life of the contract. For other types of derivatives, such as swaps, the notional amount is the basis on which interest rates are applied to calculate periodic payment obligations.

In addition to the market risk related to the underlying principal, derivatives users are exposed to counterparty risk—the chance that a counterparty will default when the value of its obligations to the nondefaulting counterparty exceeds the amount the nondefaulter owes it. The value of these obligations changes when the underlying rates, prices, or indices change. For exchange-traded derivatives, the values are directly observable, but in the case of over-the-counter derivatives, which are often not publicly reported, values must be estimated using mathematical models.

Moreover, if two counterparties have several contracts between them, a nondefaulter must continue to honor obligations on its other contracts with the defaulting counterparty.

These risks can be mitigated by covering all transactions with a master agreement that allows for “closeout” netting if one of the counterparties defaults—that is, all contractual payment obligations of the two counterparties end, and the positive and negative values of the contracts offset each other to produce a single net settlement amount.

Counterparty risk can be further reduced by requiring collateral (called margin) to be posted against exposure and residual risk (IMF, 2010), which can vary daily. Margin is usually composed of cash or marketable government bonds.

The central counterparty’s role in contagion containment was a major reason the G20 called for all derivatives contracts with standardized terms and conditions to be cleared centrally rather than bilaterally. Central clearing may also make it easier to report derivatives transactions to trade repositories, which collect and record the details of over-the-counter derivatives trades. (The G20 also called for reporting of over-the-counter derivatives transactions to trade repositories.) The availability of these records can help regulators and financial stability authorities detect the buildup of dangerous risk exposures and potential ripple effects if a counterparty defaults. The central clearing mandate focuses on standardized contracts, because customized derivatives contracts are difficult for central counterparties to valuate and net against other contracts.

The G20 also called for all contracts with standardized terms and conditions to be traded on exchanges or electronic trading platforms, where appropriate (such as when there is sufficient trading volume). The G20 considers that opaque transactions, such as those that involve bilateral trades, make markets less reliable and prone to increased risk, particularly when under stress. Opacity also may make it more difficult to determine the value of transactions, which could affect risk management. Another global body, the Financial Stability Board, which G20 leaders tasked with monitoring the implementation of the reforms, also called for improved risk-management standards, including margin posting, for non-centrally cleared derivatives.

The reforms are supposed to make derivatives trading safer and more transparent.

The global standard-setting process is close to completion, but some of the remaining parts are particularly thorny. For example, risk-management and regulatory principles for central counterparties have been finalized, but rules that define which products are sufficiently standardized to be eligible for mandated central clearing are still in the works. And although most of the global regulatory principles for trade reporting have been established, work continues on standardized identifiers at the counterparty and product levels to ensure a single designation for transactions that are alike.

But progress at the national levels lags on many fronts. The United States has come the farthest. It has implemented almost all regulations for derivatives that come under the regulatory umbrella of the Commodity Futures Trading Commission (CFTC). However, the U.S. implementation process for derivatives regulated by the Securities and Exchange Commission has only recently started. Progress in Europe lags that of the U.S. CFTC because the reform process involves coordination among 28 member countries and their regulators. Moreover, the legislation and regulations that cover the trading platform mandate are part of an all-encompassing overhaul of investment services regulations. Some other countries are holding back, either to assess the impact of the reforms on their markets or to await the completion of the EU and U.S. processes.

Regulatory inconsistencies and friction between countries have also caused a rockier road than expected. G20 leaders asked country authorities to find ways to defer to each other’s regulations, but EU regulators have resisted use of U.S.-based central counterparties by EU counterparties, and U.S. regulators want transactions involving U.S. counterparties to be traded on U.S.-authorized trading platforms.

Slow on many fronts

But it has been slow going elsewhere. For example, moving trades to electronic platforms has been slower than moving them to central counterparties, partly because it involves so many new rules. “Where applicable” and “standardized” criteria must still be settled at the global standard-setting level. Legal barriers to reporting and information sharing exist in a number of jurisdictions. These include privacy and bank secrecy laws and data protection regimes. And a proliferation of trade repositories may make it difficult to obtain an aggregate view of the market and its interconnections. This difficulty generated calls for more reporting standardization and a centralized data hub to bring together in one place the data from the two dozen or so currently authorized trade repositories (FSB, 2014b).

Authorities must look beyond national interests if they want to keep global financial stability risk in check. Success depends on countries’ deferral to each other’s regulations if they achieve similar outcomes, as well as compromise, including on privacy and on other laws that thwart cross-border information sharing.

John Kiff is a Senior Financial Sector Expert in the IMF’s Monetary and Capital Markets Department.

Except for a small slowdown during the global financial crisis, derivatives traded over the counter have been growing sharply for the past decade and a half. 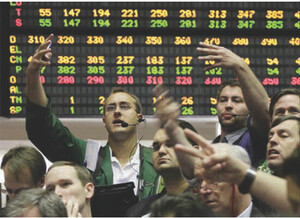 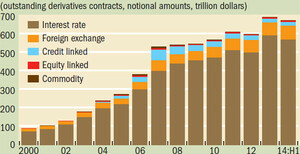