Jump to Content Jump to Main Navigation
Sharing the Wealth: Countries that enjoy a resource windfall should be prudent about distributing it all directly to their people
Author: Mr. Sanjeev Gupta, Mr. Alex Segura-Ubiergo, and Enrique Flores

Angola is the second largest oil producer in sub-Saharan Africa and one of the continent’s richest countries. Yet more children under the age of five die there than in most places in the world.

Most resource-rich countries lack the types of institutions needed to manage natural resource wealth effectively, and past performance does not bode well for countries with a resource windfall. Many of their citizens face continued poverty with little prospect of a significant improvement in living conditions. Angola’s under-five infant mortality rate is a vivid example.

In recent years, high commodity prices and new natural resource discoveries have increased many countries’ resource revenues, both as a share of the budget and in percent of GDP, offering new prospects for raising the population’s standard of living (see Chart 1). But few countries stand out as good examples of effective resource wealth management. Botswana, Chile, Norway, and the U.S. state of Alaska are some exceptions.

Some suggest that governments should give up their resource revenue and distribute it directly to the population. There are some good arguments to support this view—and strong arguments against it. Direct distribution is not a silver bullet (Gupta, Segura-Ubiergo, and Flores, 2014).

The weak track record of most resource-rich countries’ use of natural resource revenue supports the view that new discoveries could be as much a curse as a blessing. Why does this happen?

A resource boom can cause a currency’s real exchange rate to appreciate, which reduces the competitiveness of the country’s exports and diverts resources toward sectors of the economy that don’t engage in foreign trade—what is widely known as Dutch disease. Moreover, analysts have found that resource wealth is often associated with government corruption that undermines democratic accountability. These arguments are often used to suggest that natural wealth can become a “resource curse.” This idea was captured vividly by Juan Pablo Pérez Alfonso, Venezuela’s former minister of mines and hydrocarbons and cofounder of the Organization of the Petroleum Exporting Countries, who described petroleum as the “devil’s excrement” and warned of its potential to spawn waste, corruption, excessive consumption, and debt.

Many resource-rich countries lack both robust public finance management systems to ensure the transparency and efficiency of their budget process and the checks and balances in the decision-making process that are needed to ensure an effective use of resource wealth. Without them, they have struggled to follow the positive example of countries like Botswana, Chile, and Norway.

Building strong, stable institutions takes time. In the meantime, some scholars suggest, countries should distribute their resource revenues directly to the population, to boost economic growth and improve living standards (see “Spend or Send” in the December 2012 F&D).

Various arguments support this view, chiefly the claim that distribution prevents the government from misusing resource revenues and increasing its size. Some resource-rich countries arguably would welcome some form of direct distribution of revenue, but in others it could constrain the optimal provision of public goods. Moreover, even if the goal is to limit the size of the government by limiting access to resource revenue, alternatives such as reducing taxes are probably more efficient.

Another argument focuses on the impact of taxation on accountability (Sandbu, 2006). If resource revenues were distributed to the population and taxed to finance a portion of public goods, citizens would demand greater accountability in public spending programs. But this assumes that the gains from greater government accountability outweigh the efficiency losses associated with transferring revenues to the population and then taking some back. It also does not take into account that the transfer mechanism may be afflicted by the same institutional weaknesses and corruption as those of a typical resource-rich country.

How much and to whom

Views differ on how much of the revenues to distribute. One extreme calls for passing all natural resource revenues on to citizens, while more moderate proposals—Birdsall and Subramanian (2004) proposed for the case of Iraq distributing at least half—suggest returning only a portion of revenue or even just part of the investment income from a natural resource fund. The debate over how much to distribute centers around the economic consequences of such distribution, including the impact on work incentives, household savings, and overall macroeconomic stability.

As for who should receive resource revenues, distributing resources to all citizens has the appeal of eliminating political discretion over which groups should benefit. But universal transfers can have unintended consequences—such as encouraging families to have more children, which can be avoided by limiting transfers to adults. Some argue for pursuing social goals by targeting the poorest segments of the population or imposing conditions such as children’s school attendance. These laudable goals could help galvanize support for such mechanisms. They could, however, also lead to tension between reducing the coverage by targeting a particular segment of the population—particularly the poor, whose political voice is usually weaker—and increasing accountability. Moreover, the poor are not well equipped to handle income volatility, which these mechanisms would need to address.

Some argue for direct distribution outside the budget, which is subject to government corruption. This proposal would set aside resource revenue from the budgetary accounts and subject it to scrutiny, perhaps by an independent body rather than the parliament. Collection and distribution could even fall to an institution other than the national tax agency. Proponents of this idea contend that a separate mechanism to distribute resource revenues is more credible in the eyes of the population. But however achieved, direct distribution is not a recipe for eliminating corruption. It is naive to assume that a corrupt government would agree to direct distribution to deal with the problem. And there is no guarantee that the mechanism for distribution would not suffer from similar corruption.

Large-scale direct distribution has not been tested anywhere in the world.

Alaska has implemented the best known and perhaps most successful example of a direct distribution mechanism. But it is a conservative model with a relatively small dividend amounting to only 3 to 6 percent of Alaskans’ per capita income. Just a share of Alaska’s oil revenue goes into the fund, and only the investment income from this fund is distributed—subject to a cap of 5 percent of the fund’s total market value. The fund is managed by the Alaska Department of Revenue, and strong checks and balances within the budget make it in many ways a model of transparency. The case is widely viewed as a success, but one that was clearly achieved from a position of institutional strength and transparency, not as a solution to an institutional problem.

Given the limited number of direct distribution mechanisms worldwide, a look at related policies offers insight into what does and doesn’t work. It is always risky to make inferences from related policies, but the following cases provide some lessons:

Several lessons emerge from the Alaskan experience and that of related policies.

First, the overall design of fiscal policies could include direct distribution mechanisms, starting small to limit the impact on the labor supply. Limiting the proportion of resources directly distributed would ensure enough is available to the government for the provision of critical public services, as well as to ameliorate the impact of Dutch disease—as stressed by Hjort (2006).

Second, direct distribution is just as subject to corruption as public programs, so it should not be established outside the budget.

And, finally, it is important to remember that direct distribution of resource revenues doesn’t safeguard the needs of future generations.

Before embarking on direct distribution of resource revenues, a country must prepare its fiscal framework by

Direct distribution does not obviate the need to address these issues head-on. Although some argue that shifting the burden of managing volatility to the private sector could lead to improved outcomes, there is little evidence to support such a claim. As noted earlier, evidence from remittance-receiving countries suggests that the bulk of the money received is used for consumption rather than saving. While public sector management of volatility in resource-rich countries has been far from stellar, an IMF study (2012) shows that it seems to have improved as these countries shifted from policies that reinforced changes in commodity prices between 1970 and 1999 to broadly neutral ones in the past decade.

Even judicious distribution must be implemented under an appropriate fiscal framework and on a small scale to reduce the very plausible risk that distribution will stifle the provision of critical public services, lead to a drop in labor participation, or strain the government’s administrative capacity.

Sanjeev Gupta is a Deputy Director and Enrique Flores is a Senior Economist, both in the IMF’s Fiscal Affairs Department, and Alex Segura-Ubiergo is the IMF’s Resident Representative in Mozambique.

Resource revenues are large for many countries and inching up.

The size of the government varies across resource-rich countries but is not always related to its effectiveness. 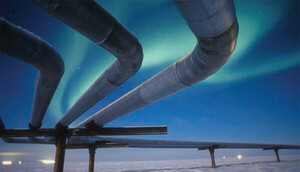 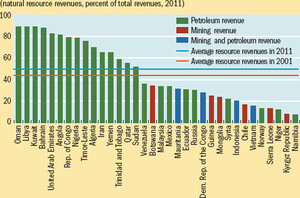 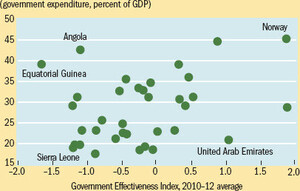