In a little more than two decades, Colombia has made big strides toward universal health care coverage. It now covers 97 percent of its citizens with the same package of benefits, guarantees access to new technologies to the poorest segments of the population, and has reduced out-of-pocket expenses more than any other developing country (Fan and Savedoff, 2014). But new and expensive medicines have put heavy pressure on that progress.

In 1993, Colombia reformed its health care system to ensure financial protection and equitable access for the whole population. The reform substantially increased the amount of public money devoted to health care and mobilized private resources—private hospitals and insurers boomed. The greater involvement of the private sector brought about some positive changes—increasing efficiency and, at least for a while, helping contain costs.

The reform was successful in many ways. In 1993, 30 percent of Colombians from the poorest fifth of the population reported no access to health care in case of serious illness. Twenty years later this percentage had fallen to 3 percent. Today more than 20 million people, half the population, receive fully subsidized health insurance from the state. Many urban poor people get the same care as the most privileged.

But success is fragile. Many of the positive changes have been put at risk by technological pressure. In the second half of the past decade, new medicines not included in the package of benefits covered by insurers began to be paid for with public funds. Pharmaceutical companies, providers, and doctors quickly realized that the state was willing to pay for almost everything (at almost any price). Payments for new medicines increased and financial problems mounted. Debts with providers grew rapidly. And public confidence in the system deteriorated.

What’s more, these developments reduced the egalitarian aspect of the reforms. In 2000, the Colombian health care system was ranked first by the World Health Organization in terms of “fairness of financial contribution.” In Colombia, individuals contribute to the system according to their income—the state fully covers premiums for the poor—and all receive the same package of benefits. Sadly, technological pressure reversed some of this “fairness.”

Paying for the technologies not included in package of benefits turned out to be quite regressive. The chart shows the distribution of payments by income quintile. Less than 1 percent of total payments went to individuals in the poorest 20 percent, while 40 percent went to individuals in the top quintile—who have better information and more access to specialists than do poorer people. In theory the access is the same for all. In practice it is not. It is difficult to imagine a more regressive use of public money.

Colombia’s health care expenditure per person is one-fifth that of a typical developed country. But inclusion of new technologies is essential to maintaining the legitimacy of the system, making sustainability a problem. Colombia is grappling with paying for expensive new medicines. Congress approved a law to permit excluding payments for ineffective technologies. The government created an agency to assess all new technologies. Price regulation was adopted, and a policy to deal with similar versions of biologic drugs (those made from proteins of living organisms rather than chemically synthesized) has been drafted. The pharmaceutical industry, which benefited greatly from an unregulated environment, opposed some of these policies.

Colombia’s experience with regulating medicine prices, allowing generic drug competition for biologics, and assessing technologies has important lessons for developing countries that must cope simultaneously with the challenges of universal health care and technological pressure.

Most of the payments by the Colombian government for new drugs not covered in a standard insurance package went to higher-income earners. 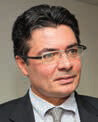 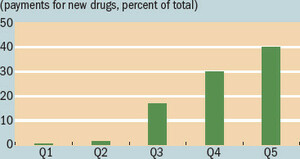