Jump to Content Jump to Main Navigation
Chained Value: The growth of multicountry manufacturing is changing how the world’s income and growth are generated
Author: Michele Ruta and Mika Saito1

The 787 Dreamliner, the latest aircraft produced by Boeing, is a well-known American product, assembled in Washington state and sold worldwide—more than 80 percent of orders come from outside the United States.

Not only are Dreamliners bought by the world, they are made in the world. Many of their parts and components are manufactured outside the United States, among them the center fuselage by Alenia (Italy); the flight deck seats by Ipeco (United Kingdom); the tires by Bridgestone (Japan); the landing gear by Messier-Bugatti-Dowty (France); and the cargo doors by Saab (Sweden).

Airplanes are just one example of multicountry manufacturing. More and more final products—such as automobiles, cell phones, and medical devices—are produced in one country using inputs from many others, partly as a result of fewer trade barriers and technology-led declines in transportation and communication costs over the past 20 years. This development, what we call the growth of global value chains, is changing how world income and growth are generated. At the same time, the nature of competition has been affected. Are countries competing over the goods produced or over the labor and capital that go into production? Changes in the nature of competition are, in turn, changing the formulation of trade and other policies that are targeted to improve competitiveness. In this article we review how the growth of global value chains has affected income and growth, measures of competitiveness, and trade policies.

The growth of trade relative to total output in the past two decades has been remarkable—a reflection in large part of the number of times intermediate products cross borders. The world export-to-output ratio rose from 20 percent in 1995 to 25 percent during 1995–2009 (in 2008, the ratio was as high as 30 percent, before falling during the global financial crisis). The change is even more impressive for some countries—such as China, where the ratio rose from 23 to 39 percent, and the northern euro area countries, where it went from 30 to 40 percent.

The growth in gross exports relative to output to some extent reflects more intensive use of global value chains: more intermediate inputs move from one country to another as part of the manufacturing process. To produce just one more Dreamliner, for example, requires more imports—cargo doors from Sweden, tires from Japan, landing gear from France, and myriad other components from foreign suppliers. Assessing the growth and income effects of value chains, however, requires looking at more than just gross exports. The value of a country’s exports (for example, a Dreamliner sold by the United States) can be very different from the value the country adds to its exports. The so-called value-added exports in this case represent the labor and capital income generated in the United States to export the Dreamliner.

A critical question is whether the growth of global value chains is generating wealth in the countries that make up the chain. The short answer is yes, but at different speeds within and across different economies. Most countries and all regions have increased their contribution to world output through exports. But for some this growth has been faster than for others. Globally, value-added exports increased from 15 percent of world GDP in 1995 to about 20 percent in 2009 (see Chart 1). Over time, both labor and capital income have increased, although capital income has grown faster as value-added exports have become more capital intensive.

Growth isn’t just about manufacturing: income in global value chains is generated increasingly by exporting services, many of which are susceptible to offshoring or outsourcing. Income generated by exporting financial, communication, business, and other services directly, or indirectly as part of manufactured goods exports, increased from 6 percent of world output in 1995 to almost 9 percent in 2008.

The increase in value-added exports results from a number of factors, but participation in global value chains appears to play an important role. Consider countries that specialize in the assembly stage. They import expensive core inputs, add relatively little value to those inputs, and export goods whose added value is largely foreign. These countries’ ratios of value-added exports to gross exports tend to be lower. But even though they take on low-value-added assembly tasks, their exports still generate a substantial portion of their income—that is, they have a high ratio of value-added exports to GDP (see Chart 2). These are also the economies that have been growing relatively fast since the mid-1990s, which suggests that there are important learning effects and other kinds of positive spillovers on the rest of the economy that come from anchoring a country to global value chains. For example, local firms in countries that specialize in assembly may indirectly benefit from exposure to new technology used by foreign firms or the improved business environment associated with foreign investment.

Since December 2012, when Shinzo Abe became prime minister of Japan, the Japanese currency, the yen, has lost about 20 percent of its value against the euro and the dollar, which could affect Japan’s Asian trading partners in two ways. It could mean that their exports are competing with much cheaper Japanese products. But the lower yen could also reduce the cost of the intermediate inputs they buy from Japan. Which effect predominates depends on how much a trading partner directly competes with Japanese products and how important Japanese imports are in products these countries produce as part of global value chains.

Economists’ standard approach to measuring a country’s price competitiveness is to calculate its real effective exchange rate, which essentially measures the buying power of a currency relative to a basket of currencies of its trading partners. (See “Why Real Exchange Rates?” in the September 2007 F&D.) This measure, though, is based on the assumption that goods traded are final consumption goods only and that goods are produced entirely in each country. In a world with value chains, this assumption is obviously incorrect. In recent years, two approaches have emerged to incorporate the international fragmentation of production into measuring the real effective exchange rate. Both provide useful new insights but with a slightly different focus.

A number of substantial free trade agreements are being negotiated that are not global but involve many large economies.

Empirical differences between the standard real effective exchange rate and the new indices incorporating global value chain operations are significant. For example, China had an additional 14 to 27 percent cumulative appreciation in its real effective exchange rate during 1990–2011 relative to the standard measurement (see Chart 3). In other words, China is less competitive than a standard real exchange rate calculation would suggest, mainly because the new measures better capture the rapid increase in the cost of wages and other factors in China (relative to its trading partners) during this period. The amount of additional appreciation varies depending on whether competitiveness is measured in terms of tasks or goods.

Global value chains involve more than just the relationship between a buyer and seller of final goods—just as the purchase of a Dreamliner involves not only the United States and the buying country but all economies that participate in the Dreamliner value chain. Changes in exchange rates between countries that are integrated in a value chain may therefore be more important and more complex than indicated by standard real effective exchange rate measures. The new indices are a step toward uncovering the complexities in value chain relationships—although more work and more data are needed to make them a tool for day-to-day policy analysis.

Although global trade talks under the auspices of the World Trade Organization (WTO), the so-called Doha Round, have stalled, a number of substantial free trade agreements are being negotiated that are not global but involve many large economies and cover a significant amount of global trade. For example, in 2013, the United States and the European Union began negotiating what they call the Transatlantic Trade and Investment Partnership (TTIP). Another important free trade pact under negotiation is the 13-nation Trans-Pacific Partnership (TPP). The growth of value chains—which has increased the complexity of international commerce and blurred the boundaries between trade and domestic policy—requires the kind of new trade rules that are often negotiated within these trade agreements.

Supply chains mix the flow of goods, investment, services, technology, and people across borders. Baldwin (2011) calls this jumble “supply-chain trade.” Supply-chain trade differs markedly from traditional trade in final goods. In supply-chain trade, firms must set up production facilities in many countries and connect those factories—moving personnel, capital, and technology among many locations.

For policymakers, there are two challenges. First, domestic policies are a more important barrier to international trade than in the past. For example, weak protection of intellectual property and investment rights hurts global value chains because moving production to another country (offshoring) increases the international exposure of a firm’s knowledge and capital. Second, the rise of global value chains creates new forms of international policy spillovers because governments’ policy choices that affect the domestic component of the international production chain also affect the full value of the chain. These challenges create a demand for international policy agreement. But the content of these agreements is no longer about keeping the temptation of self-destructive tariff wars under control, but about ensuring that policies that regulate the different parts of the value chain of complex goods like the Dreamliner are coherent across countries.

The new rules and disciplines underpinning the rise of supply-chain trade have been and continue to be written, primarily (but not only) in newly negotiated free trade agreements. These agreements often include legally enforceable provisions that go beyond the commitments negotiated under the WTO (WTO, 2011). In a survey of 96 free trade agreements covering 90 percent of world trade, the WTO found that the core rules introduced in these agreements govern competition policy, intellectual property rights, investment, and movement of capital. For instance, 73 percent of agreements in the survey contain obligations on competition policy outside the current WTO mandate. While a number of factors are behind the new wave of free trade agreements—including geopolitical considerations and the difficulties in the multilateral negotiations under the WTO—the need to provide governance to supply-chain trade is an important driver.

This relationship between free trade agreements and global value chains has overall economic consequences that are often overlooked in the policy debate:

In the past 20 years, the rise of global value chains has changed the nature of international trade with implications on, among other things, the generation of income, measures of competitiveness, and trade policymaking. The message is simple: recent developments in the area of trade have significant macroeconomic consequences, including on economic growth, countries’ competitiveness, and the transmission of shocks.

Our research points to three broad conclusions. Global value chains are generating wealth, but at different speeds within and across countries. They are also affecting the notion of competitiveness, making it more important to capture how firms produce across multiple borders. Finally, global value chains magnify interdependence across countries and, hence, the need for policy cooperation.

This article is based on the 2013 IMF Policy Paper “Trade Interconnectedness: The World with Global Value Chains.” 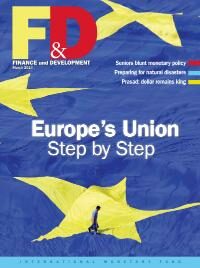 Countries that specialize in assembling products may add little value to the foreign inputs but generate a sizable portion of national income by exporting.

For an economy such as China, its competitiveness, measured by the real effective exchange rate (REER), varies when the REER is calculated to incorporate operations of global value chains. 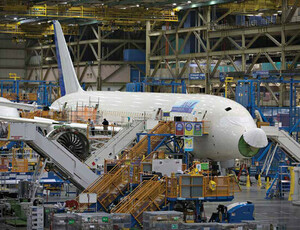 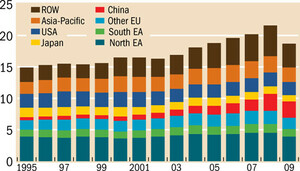 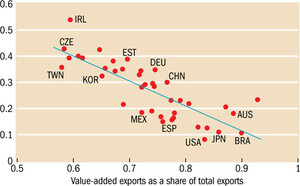