Foreign aid has long been a sizable source of funding for developing economies. In 2012, major donors disbursed $127 billion, two-thirds of it to low-income countries in Africa and Asia. Foreign aid—more precisely official development assistance—is a drop in the bucket for donor countries, about 0.3 percent of their combined GDP. But it is a major source of funding for some developing economies—amounting to 15 percent of Liberia’s GDP and 5 percent of Burundi’s, for example (see chart).

Foreign aid comes in many guises, but the most prominent is development assistance, which advanced economies disburse to poorer economies to promote economic and social development and is measured by the Development Assistance Committee of the Organisation for Economic Co-operation and Development. The general long-run objective of development aid is the alleviation of poverty and promotion of welfare in low- and middle-income countries through budgetary assistance and access to technology—although there is no clear evidence yet to support a relationship between aid and economic performance (see box).

In recent years, however, many developing economies, especially in sub-Saharan Africa, have found a new source of homegrown wealth that offers the same type of budgetary assistance as development aid—with none of the strings that donor countries often attach to how it can be used or reforms countries must make to continue receiving it. Across Africa, discoveries of large oil fields are changing the financial picture for many developing economies.

We will explore the impact of these discoveries on foreign aid. For example, do donors reduce their contribution when oil income rises? Or should they? That is, can foreign aid still play a constructive role in developing economies that strike it rich with oil?

In recent years, many developing economies, some of them major aid recipients, have discovered vast amounts of gas and oil. Although there have been some important finds in south Asia and Latin America, the discoveries have been largely in sub-Saharan Africa. Some analysts have concluded that within a decade most African countries will be oil producers. Large discoveries—oil or gas fields that contain at least 500 million barrels of ultimately recoverable oil or gas equivalent—have already been made in such countries as Ghana, Kenya, Liberia, Mozambique, and Tanzania. Income from those discoveries can amount to a large percentage of a country’s GDP. That in turn eases spending constraints on governments.

But the discovery of oil is not an unmixed blessing. Oil-rich countries have not all prospered, leading many to talk of the curse of oil, much as some analysts warn of aid’s potential to retard growth. Indeed, over the past few decades, economic growth in resource-rich countries (especially those with large hydrocarbon deposits) has, on average, been lower than in those that are resource poor (Frankel, 2012). Whether there is a negative statistical relationship between resource richness and economic growth is widely debated. But even if oil wealth does not have a negative effect on growth there is still no strong evidence that the relationship is positive.

There are a number of reasons why an oil discovery can have deleterious consequences. It can lead to strong currency appreciation that leaves other parts of the economy, especially manufacturing, uncompetitive. In other words, the oil sector prospers while other sectors falter. In addition, the riches tossed off by the oil sector lead to political and public administration corruption (Arezki and Brückner, 2011) of individuals who may borrow lavishly to finance pork barrel projects and income transfers to curry favor with voters. If the oil boom goes bust that heavy borrowing can become a severe drag on the economy (Arezki and Brückner, 2012). The discovery of oil or other resources can also lead to an internal struggle over which region or branch of society deserves the benefits (see “Under Pressure,” in the December 2013 F&D). Oil may also lead to interstate conflicts when oil reserves are near borders. Properly addressed aid programs can help countries—especially those with weak institutions and limited ability to use the newly found resources productively—deal with these problems. It is important, then, to examine the oil-aid relationship and the effects of supplanting foreign assistance with oil revenues.

Some analysts argue that aid can retard growth by driving up the value of the local currency, which makes the manufacturing sector less competitive. Others argue that aid may reduce tax revenue mobilization and that the stringent conditions imposed by donors may lead to excessive concentration of talent in aid administration. But there is also recent evidence to support the notion that aid promotes economic growth. In general, this uncertainty about aid’s effectiveness has led to demands to overhaul the existing aid framework. Some even call for an end to aid altogether.

Oil may also lead to interstate conflicts when oil reserves are near borders.

Announcements of giant oil discoveries signal that a country is suddenly richer than before. To some extent, then, an oil discovery should diminish the rationale for continued aid aimed at supporting a country’s economic and social development. In other words, the often sizable stream of income from the exploitation of natural resources will relax developing economies’ budget constraints and they will need less foreign aid. At the same time, there are many strategic reasons why donors may wish to continue providing aid (Alesina and Dollar, 2000). One is to ensure access to oil and energy produced by the recipient nation. After all, oil and gas imports are essential to the smooth functioning of most advanced economies, which are the major providers of development aid. Toward that end, maintaining the flow of development aid helps bilateral relationships and facilitates access to those resources. And because major Western oil companies stand to win contracts to extract the oil, aid is a way to ensure hefty profits for companies in donor countries.

To test whether the announcement of giant oil discoveries affects development aid, we looked at their timing. Data from Horn (2011) and the OGJ Databook (2013) document the precise time of discoveries and where and how much ultimately recoverable oil was found. Our calculations suggest that for the 170 countries we sampled over the period 1970 to 2012, the median net present value of the oil discoveries was 5 percent of GDP. Giant oil field discoveries are unevenly distributed across the world. As a result, we were able to examine the effect of the timing of a discovery on development aid in a large number of countries. In addition, using econometric techniques we can capture the effect of discoveries on development aid over the typical five-year period between announcement of a discovery and the start of production (and, therefore, revenue).

Our results show no significant relationship between giant oil discoveries and changes in development aid. To test the robustness of our main result, we explore whether the results hold only for low-income countries or only for Africa. In order to reduce the possibility of measurement error, we also use data for giant oil discoveries from different sources and reexamine the relationship. Results are robust and do not point to any significant change in aid after a recipient country announces a giant discovery. Moreover, there is nothing to suggest that donors maintain the level of aid until production begins and then scale back—there is no statistically significant difference five years after an announcement.

Because studies have found that democracies are likely to receive more aid, we test whether the political characteristics of recipient countries—such as their level of democracy—induce more aid after giant oil discoveries. We find some evidence that among low-income countries, democracies receive more aid than nondemocracies following a giant oil discovery. This result suggests that oil discoveries further deepen relationships between donors and recipient countries when political systems are considered viable over the long run.

We found little change in foreign aid to countries that discover oil. If the only goal of aid is to ease budget constraints on developing economies, then aid could be reallocated away from those economies to others that have not found new resources. But that would be a short-sighted approach.

For example, shutting down foreign aid flows could undermine efforts to improve governance in recipient countries. As we discussed, oil discoveries can lead to corruption, conflict, pork barrel spending, and the withering of an economy’s non-oil sectors. Donors could use the incentive of foreign assistance, for all its flaws, to help recipients avoid these pitfalls, improve governance, and manage the economy to offset the fallout from a rising currency. To ensure that foreign aid flows continue to nudge recipients toward economic efficiency and better governance led by democratic institutions, the aid framework should include these features:

Rabah Arezki is a Senior Economist in the IMF’s Research Department, and Ritwik Banerjee is a Ph.D. candidate at Aarhus University.

This article is based on the authors’ forthcoming IMF Working Paper, “Aid vs. Oil: Can the Two Mix?”

For some recipient countries, foreign aid is a drop in the bucket. For others it accounts for a big portion of GDP.

(foreign aid as a percent of GDP) 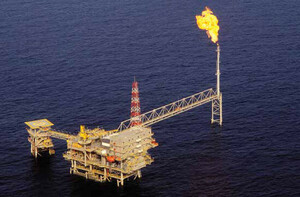 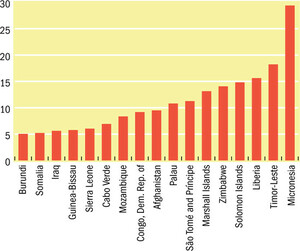