On a cold, dark afternoon in the United Kingdom in January 2013, a storm arrived from the North Sea. Windmills spun harder and harder, producing more and more energy—and then suddenly stopped as wind speed reached the level at which safety systems halt production. As a result, energy output went from the theoretical maximum to zero within hours.

But no one noticed. There were no headlines about London in the dark. The system responded as designed—first, by reducing, and then by rapidly increasing gas-fired power generation.

This smooth switch between energy sources did more than keep the lights on. It provided a glimpse of what policymakers envision as Europe’s lower-carbon energy future. It is a future filled with promise but also potholes as the continent seeks to reduce its 2050 carbon emissions to 80 to 95 percent less than its 1990 level. That means 80 percent or more of power generated in the European Union must come from wind, solar, and other noncarbon sources. An interim goal, proposed in January 2014 and under consideration by the European Commission, would reduce carbon emissions by 40 percent from their 1990 level by 2030.

The goals are ambitious. And will be hard to achieve. Compared with the United States and China, Europe already has a low carbon profile. That precludes easy solutions to reducing carbon emissions.

In the United States, coal accounts for more than 40 percent of power generation; in China, more than 75 percent is coal based. Simple substitution of much cleaner burning natural gas for coal in either country results in a substantial reduction in carbon emissions (although China continues to add coal-generation capacity far more than other sources).

But in Europe coal accounts for only about 28 percent of electricity generation, while 38 percent comes from nuclear and hydro—both of which emit no carbon. Gas substitution, then, won’t help much in reducing carbon emissions in Europe. Even if all the coal-fired power generation in Europe were replaced with gas, the electricity sector would still emit over twice as much carbon dioxide as the EU target.

That means that the ambitious emission-reduction objectives can be met only with large-scale deployment of low-carbon energy sources. And it will have to be done even as Europe replaces the nuclear capacity installed in the 1960s and 1970s. With the future of nuclear generation problematic in Europe, much of the investment needed to meet the carbon target will have to be in renewable sources such as wind and solar power—whose development is being subsidized by European governments.

But some days the sun doesn’t shine. Other days the wind doesn’t blow. Or, as in England in 2013, sometimes the wind blows too hard. The basic geographic facts—the variability of wind and sunshine—will not change. Here gas will play a role: in helping maintain the safe and cost-efficient operation of the European electricity system, which increasingly relies on renewable resources, Europe must develop energy policies that deepen integration of electricity markets, system operation, and regulation. And, as the London incident suggests, the electricity system will rely on judicious use of natural gas to keep the lights on when renewable sources cannot.

In the past decade, there has been an impressive accumulation of know-how about operating electricity systems with high shares of renewable energy. Some European countries now have several times more wind and solar production than initially projected. Arguably, this improvement in system-level knowledge is at least as important as the hard technological progress in wind and solar production.

To reach these ambitious goals, policymakers must accomplish the following:

Complete a single market for energy in the European Union. Although declarations in support of a single market are on the books, many countries still pursue energy self-sufficiency, which works against the evolution of a unified market that would allow solar-generated electricity from Germany to fuel electric heaters in Paris, as happened during a cold spell in 2012.

Create a rational market for natural gas. Gas must be the backup fuel that utilities turn to for power generation when renewables falter. Even under the most optimistic assumptions, conventional power plants will remain essential to a secure electricity supply for decades to come. Even if there were no political constraints on nuclear plants, they are too expensive to use for backup production. Coal emissions are twice those of gas. That leaves natural gas as the lowest-carbon alternative.

A modern gas turbine can go from generating zero to a million horsepower in an hour, and back to idle—as needed—with astonishing efficiency. A single plant can provide flexible backup for 600 large wind turbines. The International Energy Agency estimates that in a decarbonized EU power system, the region’s substantial gas capacity will run only 3.5 hours a day on average to fill in for faltering solar or wind or variations in demand due to weather. Sometimes gas turbines will be idle for several days; sometimes they will have to go from zero to flat out and back to zero several times a day. But that is not how gas plants are used in a system dominated by conventional energy, where they typically run 10 to 12 hours a day and reduce production or shut down at night. The euro area recession reduced power demand and hastened a transition to low and variable utilization in Europe, but electricity market design did not keep up, which led to concern about stranded investments. Europe must rethink the design of electricity markets and build a flexible gas infrastructure that can handle rapid fluctuations in demand and has the capacity to store and send out gas almost instantaneously. It also needs efficient, liquid spot markets in which utilities can obtain gas on short notice. It needs new transmission lines and secure sources for a fuel that is expensive, and must develop sources when all it can guarantee gas producers is variable demand dependent on the vagaries of solar and wind production and on changes in consumer usage.

Windmills and solar farms are often built where there are attractive subsidies rather than in places with strong wind or abundant sunshine.

Improve the cost efficiency of renewable sources. Development of renewable sources is being subsidized by European governments based on the premise that they are infant industries that need help to reach the economies of scale of their competitors. But in some cases, excessive subsidies have triggered investment bubbles—in solar panels, for example. In other cases, energy policies did not fully take into account geographic conditions and developments in technology. Because renewable subsidies differ from country to country and from technology to technology, there are more than 3,000 different subsidized prices for the same commodity, which distorts investment. Windmills and solar farms are often built where there are attractive subsidies rather than in places with strong wind or abundant sunshine and cost-efficient infrastructure connections.

Overhaul the design of markets for electricity. Some European countries have several times more wind and solar production than initially projected, and technology costs have declined—both of which are positive developments. But there is no silver bullet for dealing with the volatility of generation that results. For a century, the electricity industry was planned on the supply side: consumers use whatever they want whenever they want it and the system meets the demand. Inefficient even in a conventional system, it is unaffordable in one that relies on wind and solar.

Europe could undertake more demand-side approaches. Persuading a million customers to turn down their air conditioners a bit has the same result as a billion-dollar backup power plant. Such an approach was instrumental to the safe operation of the electricity system in Japan after the loss of nuclear generation. Another approach is to smooth integration of electricity markets, with more liquid electricity trade across the continent, which would take advantage of the fact that peak demand varies country by country. Overall European peak demand is 30 gigawatts less than the sum of the national peak demands at different times—equivalent to the electrical needs of a medium-size country. Northern Europe’s demand peaks in the winter; southern Europe’s in the summer. North–south flows could yield powerful efficiency gains.

But Europe’s power transmission system is far from ready to function in an integrated fashion and support a low-carbon energy market. Progress in expanding transmission capacity has been slow because virtually each new transmission line faces heavy local resistance. Although some obstacles may be overcome, transmission capacity will remain a scarce resource. Moreover, it is still organized at the national level. Electricity must be able to flow across national borders in Europe with ease. With a much stronger transmission network linking the various European regions and allowing integrated markets to respond to weather changes in real time, European wind and solar production could eventually quadruple, to over 100,000 new windmills and half a billion solar panels.

This low-carbon future will come with a higher price tag—but how much higher depends on whether Europe takes steps now to transform its energy landscape, putting in place policies that support natural gas as an “insurance” fuel while driving down costs of renewables, improving transmission of both gas and electricity, and breaking down national barriers. It could defer action, of course—perhaps the costliest choice of all.

Laszlo Varro is the head of the Gas, Coal and Power Market Division at the International Energy Agency. 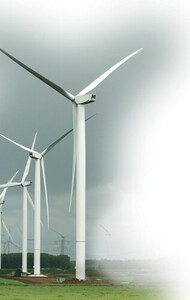