Economists have established that erratic taxing and spending policies hurt long-term growth and the overall welfare of a society (Fatás and Mihov, 2003; 2013).

One source of that policy volatility can be election related. As part of their reelection effort, incumbents can manipulate economic policy instruments. Among other things, they raise public spending and run budget deficits to increase overall demand and create jobs (even on a temporary basis)—and boost their election prospects.

But the preelection excess can be followed by a postelection hangover. Governments often have to go on an austerity plan to offset their free-spending preelection policies. This politically generated boom-bust cycle can hurt long-term economic growth and stability.

Preelection priming of the economy occurs mostly in developing countries (Shi and Svensson, 2006). We concentrated on low-income countries—those with annual per capita gross national product below $ 1,175 and without durable and substantial access to international financial markets. Over a 21-year period, we found strong evidence of such election-induced cycles in 68 low-income countries. In the year before the election, current spending and deficits grew. In the aftermath, to rebuild the buffers they depleted, governments cut investment spending and raised some taxes. We also explored two potentially important constraints on the ability of an incumbent to pursue a politically motivated fiscal agenda in an election year—fiscal rules, which set explicit targets for budgets, and IMF programs, which include explicit fiscal targets. We found that both significantly dampen the magnitude of the political budget cycle.

Empirical studies of the political business cycle from the 1970s until the 1990s focused almost entirely on advanced economies, where generally researchers have not found statistically significant evidence of such cycles. More recent studies, however, that looked at current government expenditures, indirect tax revenues, and budget deficits found evidence of politically driven economic cycles in developing economies.

Most of these studies did not explicitly focus on low-income countries, but pooled together all developing countries—low and middle income. Moreover, although they studied what happens to specific variables during elections, they did not provide robust analysis of the composition of the postelection adjustment.

We focused on low-income countries because they are particularly vulnerable to election-related cycles. These countries’ weaker institutional capacity and poor budget transparency pose greater risk that incumbents will use fiscal policy to help them get reelected. By depleting their fiscal buffers during election years, low-income countries further increase the vulnerability of their economies to adverse developments and limit their ability to deal with external shocks, such as a sudden change in commodity prices. Therefore, it is important to better understand the composition of election-related budget cycles in low-income countries and to explore ways to mitigate related fiscal policy volatility.

Postelection years are characterized by an effort to partially rebuild fiscal buffers, but at a price.

We conducted empirical studies of a large number of low-income countries over the period 1990–2010. In analyzing the effects of elections on fiscal variables of interest, such as spending and deficits, we took into account the effects of other determinants of fiscal performance in low-income countries and of some types of elections not required by national constitutions. We used various sources, including election data from Hyde and Marinov (2012), a data set that covers 68 low-income countries over 21 years. About 50 of these countries had at least one election during that period. We found that in low-income countries there are political budget cycles in which governments tend to increase current expenditures during election years—by 0.8 percentage point of GDP. As a result, the overall fiscal deficit swells. Postelection years are characterized by an effort to partially rebuild fiscal buffers, but at a price. Public investment is reduced by about half a percentage point of GDP (see Chart 1). Although we did not study it explicitly, this form of postelection fiscal retrenchment in investment can seriously retard economic growth. Productive government investment is an important driver of economic growth and must be stable. For example, an austerity program that leaves a well-designed road construction project half done after an election is not only wasteful but impedes economic activity.

We also noted significantly larger overall government tax-collection efforts in the years following an election—but in a way that can hurt the economy. We broke down total tax revenue into its components and found that in low-income countries, revenue from trade taxes (whether imports or exports) increases after elections as governments seek to rebuild eroded fiscal buffers. Trade tax revenue grows even though the end of heavy preelection spending often results in decreased demand for imports. This focus on trade taxes may reflect the relative ease of collecting them in low-income countries—where raising revenue, especially domestic tax revenue, tends to be more difficult than in advanced and emerging market economies. But significantly raising trade taxes could jeopardize a country’s external competitiveness, which ultimately lowers long-term economic growth. Our findings are solid even when we account for the possibility that incumbents can manipulate the timing of elections to take advantage of good economic conditions.

We know of no empirical work that examines the effects of fiscal rules and IMF programs on the likelihood, size, and composition of political budget cycles in low-income countries.

There were also IMF programs in a number of low-income countries over the past decades. The degree of constraint imposed on incumbents’ election-year extravagances by the conditions of the loans connected with those programs is an important consideration as well.

We distinguished between a domestic institutional constraint on fiscal policy (such as a fiscal rule established by law) and participation in an IMF program. National fiscal rules may dampen electoral fiscal manipulation if the rules prevent fiscal extravagances by an incumbent around the time of national elections. Among low-income countries, fiscal rules agreed to by the country itself are more effective and more widely enforced than supranational fiscal rules—which are set by a regional agreement, such as a monetary union, and imposed equally on all members of the agreement. The empirical results show that for low-income countries without national fiscal rules, the effect of the political budget cycle on government consumption is about 1 percent of GDP. However, when countries have put in place explicit national rules, the fiscal expansion during election years shrinks to only 0.13 percentage point of GDP (see Chart 2).

Furthermore, we tested whether countries engaged in programs with the IMF are less likely to experience a political budget cycle because those low-income countries are subject to IMF conditionality. One key component of programs’ conditionality is the requirement that countries adopt sustainable macroeconomic policies. As a result, if implemented, conditionality constrains government finances, making it more difficult for governments to engage in expansionary fiscal policies during elections.

Some scholars have argued that governments prefer not to be under IMF agreements during elections, and research has shown that they are more likely to enter into such agreements after elections (see Chart 3). But even after accounting for that government reluctance and controlling for other factors correlated with the decision to request a program with the IMF, the empirical results show that IMF programs constrain the political budget cycle in low-income countries. In the absence of an IMF program, government consumption grows by about 1 percentage point of GDP during national elections, whereas that deviation drops to 0.34 percentage point of GDP in the presence of an active IMF program. Our findings are solid even when we take into account that a country’s decision to enter into an IMF-supported program is not made independently of its economic conditions nor of its electoral cycle.

We found that national elections are an important source of fiscal volatility (changes in expenditures and taxes) in low-income countries, with potential adverse effects on long-term economic growth. Fiscal rules and IMF programs dampen the magnitude of the political budget cycles. But relatively few low-income countries have adopted explicit national fiscal rules so far, and it is difficult for many of them to do so credibly because they are subject to frequent shocks (such as natural disasters and commodity price changes) that can have a far more devastating effect on budget discipline than in larger, better-off economies. Neither IMF programs nor fiscal rules are substitutes for genuine political commitment to budget consistency.

This article is based on IMF Working Paper 13/153, “Fiscal Policy over the Election Cycle in Low-Income Countries.”

The party, then the hangover

Government consumption spending and the budget deficit rise in election years in low-income countries. The following year, the belt is tightened and public investment is sacrificed.

Both fiscal rules and IMF-supported programs hold down government consumption growth in an election year, but fiscal rules appear to bite harder.

Governments are more likely to wait until after an election to enter into an IMF-supported program, which generally constrains a government’s spending and borrowing. 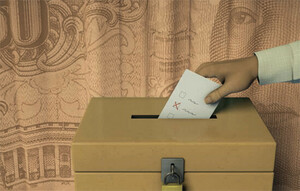 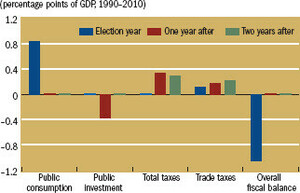 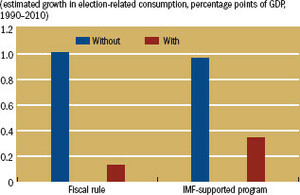 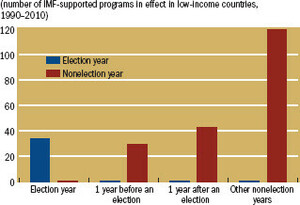