This paper focuses on overcoming the challenges of globalization. The paper highlights that globalization has the potential to make all individuals better off. However, there is no assurance that all individuals will be better off or that all changes will be positive. The studies that show that, on average, poverty declines with economic growth are encouraging. But averages hide the negative impact on individual countries and on certain groups. In addition, there are important questions about the relationships between economic policies and outcomes, especially the impact of macroeconomic and structural reform policies on poverty.

This paper focuses on overcoming the challenges of globalization. The paper highlights that globalization has the potential to make all individuals better off. However, there is no assurance that all individuals will be better off or that all changes will be positive. The studies that show that, on average, poverty declines with economic growth are encouraging. But averages hide the negative impact on individual countries and on certain groups. In addition, there are important questions about the relationships between economic policies and outcomes, especially the impact of macroeconomic and structural reform policies on poverty.

Would the exchange rate stability created by a target zone for the world’s three most important currencies be in the best interests of emerging market countries? A recent study suggests such stability might come at the price of more volatile interest rates, making this a difficult question to answer.

The pioneering work on target zones done by Ronald McKinnon and John Williamson focused mostly on the potential benefits for the industrial world. In recent years, however, analysts have begun to wonder if emerging market countries might benefit, too, because many of their currencies are tied to the dollar, either implicitly or explicitly. After all, the volatility of industrial country exchange rates was considered a factor in the financial crises that plagued emerging markets in the late 1990s. In particular, the prolonged appreciation of the dollar vis-à-vis the yen and the deutsche mark before the Asian crisis was viewed as having worsened the competitive positions of many emerging market economies.

One way to reduce destabilizing shocks emanating from abroad, the argument runs, would be to reduce the variability of the exchange rates between the Group of Three (G-3) currencies—which are those of the United States, Japan, and the 12 members of the euro area (Austria, Belgium, Finland, France, Germany, Greece, Ireland, Italy, Luxembourg, the Netherlands, Portugal, and Spain) by establishing target zones. Would this be a good deal for emerging market countries? To answer this question, we examined the impact over the past thirty years of fluctuations in G-3 exchange rates and interest rates on 128 developing countries. Our findings should give advocates of such a target zone pause.

Essential to understanding the costs and benefits of a target zone is answering the question: how would the G-3 central banks (the U.S. Federal Reserve System, the Bank of Japan, and the European Central Bank) ensure that the relevant exchange rates were kept within the specified zone? In principle, three possible tools could be used:

• First, national authorities could rely on sterilized intervention in the foreign exchange market—that is, purchases or sales of a country’s own currency that are carried out without affecting its domestic money supply—to restrict the movement of bilateral exchange rates.

• Second, national authorities could impose some form of exchange or capital controls, such as a transactions tax or prudential reserve requirements for the banking system.

• Third, monetary authorities in the major countries could alter domestic market conditions to keep the exchange rates of their currencies within a desired range. This could include conducting normal, or nonsterilized, intervention in the foreign exchange market (purchases or sales of a country’s own currency that affect its domestic money supply), thereby more directly linking domestic interest rates to the exchange value of the currency.

As it turns out, the only viable option is the third one because sterilized intervention has proved to be ineffective and the international community generally supports the free mobility of capital. How would option three work? If the exchange value of the dollar in terms of the yen were rising toward the upper limit of the agreed target zone (that is, if the dollar were appreciating in terms of the yen), for example, the Federal Reserve could reduce it by buying yen with dollars. This, in turn, would increase the amount of reserves in the U.S. banking system and lead to lower U.S. short-term interest rates. The key here is that there would be a trade-off: G-3 domestic short-term interest rates would have to become more variable to make G-3 exchange rates less variable. Moreover, the subordination of monetary policy in the G-3 countries to an exchange rate target would presumably alter the dynamics of their business cycles and the flow of capital to the developing world.

Thus, a target zone could reduce exchange rate volatility while increasing interest rate volatility. To evaluate this tradeoff, it is important to remember that most developing countries are net debtors to the industrial world, with their debt typically short term and denominated in a G-3 currency. As a result, more stable G-3 exchange rates would mean more stable terms of trade for emerging markets but would also increase the volatility of the costs of servicing foreign debt and possibly raise risk premiums. All things considered, an emerging market economy would not necessarily be better off. The benefit of more stable terms of trade must be weighed against the cost of more uncertain interest expense, a calculation that depends on the composition of both trade flows and the stock of debt. Indeed, such a computation may be quite complicated if, for example, large increases in borrowing costs induced balance-sheet strains and led to credit rationing that hurt a country’s income prospects even more than reductions in borrowing costs of the same size would help. Accounting for more complicated—and realistic—interactions between the industrial and developing worlds makes the calculation even murkier, as higher volatility in G-3 interest rates might affect the overall level of demand in industrial countries or the willingness of investors there to extend credit abroad.

With economic theory suggesting a variety of channels of influence that do not all work in the same direction, we addressed the question empirically. We began by asking how U.S. business cycles—that is, recessions or expansions—affected real capital flows to emerging markets during 1970–99. As shown in Chart 1, net flows to emerging markets were, not surprisingly, considerably larger in real terms when the United States was in expansion than when it was in recession. This gap stems primarily from a surge in foreign direct investment (FDI) flows (which go up nearly threefold from recession to expansion) and in portfolio investment flows (which go up almost fivefold from recession to expansion).

The key offsetting category is other net inflows—mainly bank lending—which evaporated when the United States was expanding. Apparently, banks tended to seek more lending opportunities (often short-term ones) abroad when the domestic demand for loans weakened and interest rates fell, as often happens during recessions. Demand for loans from industrial countries presumably picks up as well when FDI dries up. The U.S. bank lending boom to Latin America in the late 1970s and early 1980s and the surge in Japanese bank lending to emerging Asia in the mid-1990s are two examples of the cyclicalily of other net inflows. Although a U.S. recession may not be all bad news for capital flows to emerging markets, those flows consist principally of less stable short-term financing rather than more stable FDI.

We split this same annual sample according to the direction of U.S. monetary policy. In years when U.S. monetary policy was easing, emerging markets in all regions (with the exception of Africa, which was almost entirely shut out of international capital markets) received a markedly higher volume of capital inflows. Although FDI and portfolio investment flows do not change much during the interest rate cycle, other (short-term) flows fluctuate considerably during it.

As can be seen by the closeness of the first pair of bars, annual capital flows averaged about the same when G-3 exchange rates were volatile compared with when they were stable. However, exchange rate volatility apparently was associated with a tilting of those flows away from portfolio investment and toward direct investment. Considerably greater consequences are evident when U.S. short-term interest rates fluctuated more than average. Over the past thirty years, capital flows have been higher when interest rates have changed more. This owes entirely to portfolio and other (predominantly bank) flows, which were virtually nil, on a net basis, when interest rates were stable but above $10 billion in the aggregate when interest rates were volatile. In contrast, private direct investment apparently suffered from interest rate volatility: the amount observed in volatile periods was half that observed in stable periods.

As policymakers weigh a G-3 target zone, they might legitimately wonder if it is in the interest of the developing world. The historical record does not suggest that G-3 exchange rate volatility weighed unusually heavily on capital flows to emerging market economies. And if G-3 exchange rate stability is purchased by making industrial country interest rates more volatile, there may be a significant downside for emerging market economies. That financial channels may respond differently in the South than in the North should not come as a surprise. After all, emerging market economies—which have already surrendered a high degree of autonomy in their monetary policies, often price their goods in foreign currencies, and can be shut out of world financial markets suddenly—are quite different from their industrial brethren.

This article draws from the authors’ paper, “What Hurts Most: G-3 Exchange Rate or Interest Rate Volatility?” presented at the National Bureau of Economic Research’s Currency Crisis Conference in Monterey, California, in March 2001. 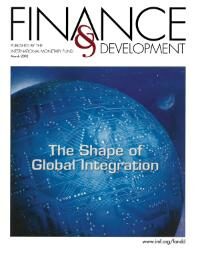 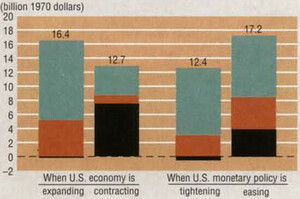 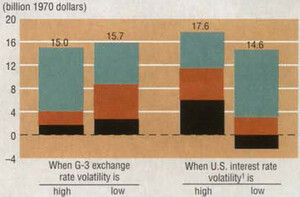