IT IS easy to lose track of the improvements that have occurred over time in the lives of poor people in many developing countries. It is just as easy to overlook the lack of progress in many countries where millions of people remain impoverished, uneducated, and in ill health; gender inequalities persist; and basic human rights are denied. The difficulty of measuring and achieving further progress has given rise to frustration and despair in developing countries and contributed to cynicism and “aid fatigue” in rich countries. And, without a clear track record, it is hard to see which antipoverty efforts have worked best and to learn from our mistakes.

In 1996, the Organization for Economic Cooperation and Development (OECD) published a report, Shaping the 21st Century: The Contribution of Development Cooperation, in which it selected seven goals for development drawn from agreements and resolutions of the conferences organized by the United Nations in the first half of the 1990s (see box). In his speech at the 1999 World Bank-IMF Annual Meetings, Michel Camdessus, then IMF Managing Director, proclaimed them “seven pledges for sustainable development.” In their introduction to A Better World for All: Progress towards the international development goals, UN Secretary-General Kofi Annan, OECD Secretary-General Donald Johnston, IMF Managing Director Horst Köhler, and World Bank Group President James Wolfensohn said, “Our institutions are actively using these development goals as a common framework to guide our policies and programs and to assess our effectiveness.” The goals are included in the recent United Nations Millennium Declaration by Heads of Government.

They have thus gained acceptance as measures of the success or failure of development programs. But how likely are we to achieve them? It is not possible to answer with absolute certainty, but certain trends are beginning to emerge.

What will it take to achieve the goals?

Empowering poor people is the starting point—providing them with opportunities, protecting their rights, enabling them to organize, and making governments accountable to them.

Poverty reduction requires economic growth. It is vital that developing and transition economies achieve sustained increases in real per capita incomes. Further, growth must generate income-earning opportunities for the poor, including women, and give the poor greater access to assets. For this to occur, economic policies must be sound, well balanced, and sustainable.

Poverty reduction also requires investment in basic social services, especially for the poor. Countries have to deliver high-quality and cost-effective services to the poor and provide cost-effective social safety nets in times of crisis. And they must increase their domestic saving rates and spend scarce resources wisely, on productive programs.

High-income countries must also shoulder their responsibilities. They should reduce tariffs and other barriers to imports from developing countries and provide more aid, especially to those that use it effectively. Most OECD countries have adopted a target to provide 0.7 percent of their GNP as aid, but few have reached it. Debt relief for the most heavily indebted poor countries will free resources that can be used to support national poverty reduction strategies.

The developing countries still face a number of daunting challenges. Globalization offers enormous opportunities for growth and social development, and taking advantage of these opportunities requires change. Opening markets can help poor countries realize the benefits of increased trade and new technology. But structural change can be painful. Privatization, capital mobility, and deregulation of markets have weakened the role of the state, challenged some democracies, and failed to deliver promised benefits to poor countries.

Another, equally important, challenge is to contain the spread of HIV/AIDS, which claimed almost 3 million lives in 1999 and is impoverishing nations, communities, and families. The United Nations Millennium Declaration calls for halting and reversing by 2015 the spread of HIV/AIDS, malaria, and other major diseases. To do so will require additional resources and redoubled efforts. In particular, programs for the prevention and treatment of HIV/AIDS and other diseases need to be made more affordable to poor countries.

One of the great merits of the international development goals is that they address a specific set of objectives in a definite time period. But improvements are occurring too slowly for all of the poor countries to achieve all seven goals, and new challenges will undoubtedly arise, making success even more elusive. Our commitment should be to reach the goals in every country, despite the difficulties we face. Success in only a few countries, no matter how large, is not enough.

1. Reduce the proportion of people living in extreme poverty by half between 1990 and 2015.

3. Make progress toward gender equality and the empowerment of women by eliminating gender disparities in primary and secondary education by 2005.

5. Reduce maternal mortality ratios by three-fourths between 1990 and 2015.

6. By 2015, provide access to reproductive health services to all who need them.

7. Implement national strategies for sustainable development by 2005 so as to reverse the loss of environmental resources by 2015.

The goal of halving the number of people whose incomes put them below the poverty line will not be easy to achieve in the proposed time frame. Progress has been uneven across regions, and there are large differences between countries within regions. Most of the worldwide decline in poverty has been in East Asia, notably China. In the rest of the world, although the proportion of people in poverty has declined, the number of poor people has increased because of population growth. The proportion of poor people remains highest in sub-Saharan Africa.

School enrollment rates are rising in most regions, but too many children are still not in school. It is not sufficient to raise enrollment figures; it is equally critical to eliminate gender bias and disparities between rich and poor in enrollment rates and ensure that enrolled children stay in school long enough to complete their basic education.

Providing equal access to education is one way to empower women. At the global level, the gender gap in primary and secondary enrollment is narrowing. But progress is not occurring fast enough to close the gap in education by 2005, and gender gaps persist in economic and political life.

Infant and under-5 mortality rates fell by more than half between 1960 and 1990. But progress slowed in the 1990s. In most regions, a massive effort will be needed to attain a two-thirds reduction by 2015. Many factors are contributing to high mortality rates: unsafe water; inadequate immunization; war and conflict; high levels of poverty and malnutrition; poor access to basic education, particularly for girls; the spread of HIV/AIDS; and the resurgence of malaria and tuberculosis.

Skilled care during pregnancy and delivery can do much to avoid many of the half million maternal deaths each year. Maternal mortality varies widely in different regions—the rate is low in Latin America but very high in Africa. More investment is needed in health systems to improve the quality and coverage of delivery services and to provide the poor with prenatal and postnatal care.

During the 1990s, the use of contraception increased in all regions, although Africa lagged behind, and there is still a large unmet need for quality reproductive health information and services, particularly among adolescents. With rising numbers of people in poor countries passing through their reproductive years, the challenge is to sustain the gains in the decade ahead.

Improved environmental management is beneficial to the poor. For instance, almost 20 percent of the world’s population relies on unimproved water supplies to meet their daily needs. The forests are a disappearing resource, and the emission of greenhouse gases could increase if developing countries follow the example of high-income countries today. National strategies for sustainable development are needed, followed by effective steps to conserve natural resources and protect the environment. But fewer than half the developing countries have strategies and even fewer are implementing them.

This article is based on A Better World for All: Progress towards the international development goals, which was published in June 2000 by the IMF, the OECD, the United Nations, and the World Bank. It was the first report ever signed by the heads of all four institutions. The authors of this article participated in drafting the report, which is available on the web in English, French, and Spanish at http://www.paris21.org/betterworld.

Proportion of people living on less than $1 a day (percent)

Ratio of girls to boys in primary and secondary school (percent)

Deaths of children under 5 per 1,000 live births

Contraceptive use (percent of population in their reproductive years) 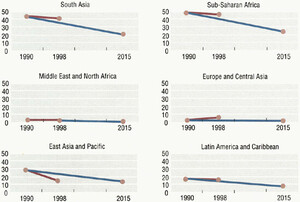