Between 1992 and 1997, most of the transition countries succeeded in getting inflation under control without evident cost in terms of lost output. An understanding of the factors behind their success could not only shed light on the transition process but also yield lessons for other countries seeking to tame inflation.

WHEN the centrally planned economies began to transform themselves into market economies in the early 1990s, inflation spiked in the context of loose macroeconomic policies and removal of price controls. In 1992, the median inflation rate was nearly 100 percent in the Central and Eastern European countries, and well over 1,000 percent and rising in the Baltics, Russia, and other countries of the former Soviet Union. By 1997, the median inflation rate in both areas had fallen to 11 percent.

Most of the transition countries achieved inflation rates below 60 percent remarkably quickly—within six months of taking anti-inflationary measures. In Croatia and Georgia, inflation rates fell even more rapidly, although in other countries—including Estonia and Ukraine—this initial reduction of inflation took considerably longer.

Although the drop to 60 percent was rapid in most countries, further declines happened more slowly in several countries. For example, inflation persisted at moderate to high levels (between 15 and 60 percent) for more than two years in the advanced reformers—the Baltic countries and the larger countries of Central Europe. One year after inflation had fallen below 60 percent, the median inflation rate in these countries was still roughly 30 percent; five years later, it had fallen to 15 percent. Nonetheless, with a few exceptions—notably, Albania, Bulgaria, and Romania—the transition countries did not see a resurgence of high inflation during 1992–97. (At the end of 1995, inflation rates had fallen to 6 percent in Albania and to 35 percent in Bulgaria and Romania; two years later, they had climbed to 40 percent in Albania, 580 percent in Bulgaria, and 150 percent in Romania.)

Initially, the anti-inflationary stance adopted by the transition countries was highly controversial, for several reasons. First, some observers believed that inflation, though high, was not unduly costly to output and should therefore not be the main focus of policy. Second, it was feared that efforts to subdue inflation, even if successful, would precipitate a collapse of output, which had already contracted more than anticipated. Third, there was a possibility that attempts to control inflation would weaken already fragile external balances.

It now appears that these concerns were unwarranted. There is formal evidence that, controlling for other factors—particularly the effects of structural reform and export market growth on output—inflation above a certain level was associated with output losses in the transition countries. The data suggest that the threshold for this region is in the low teens. And the greater the extent to which inflation exceeds that threshold, the greater the loss of output associated with it. Furthermore, controlling for the underlying relationship between inflation and output, as well as for the other factors noted above, the sacrifice ratio—that is, the loss of output associated with disinflation—for the region as a whole has been zero. Moreover, it is also now clear that there has been no strong link between disinflation and the external balance. On average, the external current account balance deteriorated in the years following disinflation efforts, but the debt-financed external balance did not, because foreign direct investment and other equity flows filled the gap.

These striking successes call for an explanation. Several factors appear to account both for the reduction of inflation and for the resilience of output and the external balance to anti-inflationary measures (see chart).

The context for disinflation

First, the context for disinflation may have been far more propitious than it appeared at first. Most important, because the transition countries’ experience with inflation was brief, they did not resort to the adaptive measures often seen in countries where inflation has become a way of life—for example, backward-looking indexation. The only countries to rely on backward-looking indexation were Croatia, Poland, and Slovenia—and Croatia abolished it at the outset of its disinflation efforts. Many other forms of indexation were present, but they were rarely backward looking and therefore did not generate inflation inertia. In addition, the fact that the general public was unaccustomed to high inflation may have reinforced political commitment to disinflation programs, which were associated in the minds of many with the overthrow of the old regime. (Support for disinflation was by no means universal in the region, however, and, in some countries, disinflation still has few supporters.)

Other factors contributing to the unexpectedly favorable climate for disinflation are related to the small size of the transition countries’ financial sectors. At the outset, financial fragility was a critical concern—two-tier banking systems were in their infancy, and banking systems were ill prepared to cope with major relative price changes and shocks to the price level. And yet this fragility did not impede disinflation. In many countries, the banking sector was small relative to output, partly as a result of the inflation that had characterized the early stages of transition. Georgia and Moldova, where broad money was only about 3 percent and 12 percent, respectively, of GDP in 1994, present two extreme examples of this. Because many countries had small financial sectors, there was a limited need for public resources to ensure financial sector resilience in the midst of disinflation efforts. The financial sector was also not essential to the transmission of disinflation policy to the real economy. Instead, given that the root of inflation was fiscal in most countries, fiscal policy was the key transmission mechanism. And the fact that disinflation was marked by sharply falling nominal interest rates meant that, to the limited extent that bank lending rates were fixed relative to deposit rates, bank spreads widened during disinflation, bolstering financial stability.

Fiscal factors also contributed to the transition countries’ success in curbing inflation. Fiscal consolidation in the transition area has been dramatic. In 1992, the average ratio of fiscal deficits to GDP was around 13½ percent; five years later, the ratio had dropped to 3½ percent. In addition, almost all the countries had developed, at the very least, primary treasury bill markets, thereby increasing the diversification of funding sources available. As a result, central bank credit to the government declined from about 11 percent of GDP in 1992 to less than 1 percent of GDP in 1997.

The correlation between a strong fiscal position and disinflation is also evident in each country’s experience. Fiscal corrections have been closely associated with disinflation. What exceptions there are confirm the rule. Although Estonia achieved a strong fiscal position early in its transition, disinflation did not begin until 1992, but the lag was due to the delayed establishment of the country’s new currency. Two other countries—Romania and the Kyrgyz Republic—were able to achieve a significant decline in inflation without a particularly marked fiscal correction or a strong fiscal stance. However, Romania is one of the few countries in which inflation flared up again after disinflation had begun, and the Kyrgyz Republic’s fiscal position was dominated by a large, externally funded public investment program, so domestic credit and credit from the central bank to the government were tight throughout the period during which disinflation was taking place.

Nominal anchor frameworks were the third element in the successful disinflation. Although it is not surprising that no countries adopted formal monetary targets—given the shocks to money demand emanating from the transition process itself—it is striking that so few used formal exchange rate targets. Only four countries used some form of formal exchange rate commitment during 1992–97—Estonia, Lithuania, the former Yugoslav Republic of Macedonia, and Bulgaria (during its 1997 disinflation program). The evidence suggests that even informal targeting of exchange rates was exceptional (although formal exchange rate targets had figured prominently in earlier attempts to control inflation in Eastern Europe).

Two factors account for the decision not to rely on formal and informal exchange rate anchors. First, inflation during this period had relatively little inertia. There was thus less need for a clear nominal anchor around which expectations could form as part of the disinflation process. Second, there were practical difficulties with pegging during this period. At the outset, many of the transition countries’ currencies were deeply undervalued and were backed by limited international reserves, making it difficult to operate pegs at sensible rates. The weakness and vulnerability of the ruble compounded these difficulties for countries that had Russia as a major trading partner. Had such countries adopted pegs to hard currencies, as conventional wisdom dictated, a subsequent recovery of the ruble would have imparted an inflationary impulse through the peg, offsetting the intended disinflationary effect of the hard currency peg. And if, in light of this risk, the ruble had been included in the currency basket, the credibility of the peg as a nominal anchor might have been compromised. Thus, how to design and operate a peg as a disinflation anchor in this environment was far from obvious.

But if countries were neither targeting exchange rates nor pursuing monetary targets, what were they doing? Essentially, they were informally targeting inflation. And this approach was not simply the best of a bad set of choices. Croatia and Georgia, for example, used this framework to allow nominal exchange rates to appreciate during the initial stages of their disinflation efforts. This accelerated the disinflation process and partly explains the exceptional speed with which these two countries achieved declines in their inflation rates. Progress with disinflation was much slower in countries that adopted formal exchange rate pegs—notably, the advanced reformers.

The final factor behind the transition countries’ success in slowing inflation is that disinflation programs were designed to achieve results quickly. They were not held up until other desirable pieces of the economic jigsaw puzzle—notably, structural reforms—had been put in place.

The reduction in inflation across the transition countries has been remarkable, particularly given the chaotic conditions in which most of these countries were operating in the early 1990s. Inflationary pressures that had long been suppressed through price controls turned out to be less of a problem than the other challenges confronting these countries’ new and inexperienced policymaking institutions, including the collapse of output, employment, and fiscal revenues; military conflicts; and redrawn national boundaries.

Not only has output been resilient to disinflation, but low inflation has been associated with faster economic growth. The fight against inflation is not over, however. In addition to those countries that experienced a reignition of severe inflation—Albania, Bulgaria, and Romania—several others, including Armenia, Belarus, and Uzbekistan, have experienced relapses of less severity. Policymakers who become complacent risk losing control over inflation again, even in countries where inflation has been moderate and manageable but persistent. One lesson that has emerged from both the successes and the failures of anti-inflationary programs in the transition countries is that even if comprehensive structural reforms are not preconditions for achieving low inflation, they appear to be essential to sustaining it. 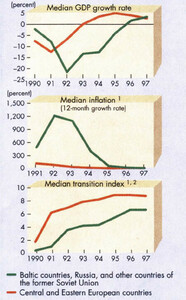