IF GOVERNMENTS are to control the spread of tropical diseases in the developing world, they need to understand what measures are likely to work and under what circumstances.

Tropical diseases kill almost two million people a year. Another half a billion people—one person in ten—suffer the disabling effects of these diseases, which cause severe anemia, blindness, brain damage, gross deformities and other maladies (see box). Nearly all of these victims live in the developing world, particularly Africa, and are among the poorest of the world’s people, subsisting in rural farming communities or urban squatter settlements. Apart from causing tremendous pain and suffering, these tropical scourges have insidious effects on society: they impede national development, make fertile land inhospitable, and exact a huge cost in treatment.

Relatively few governments support major efforts to control tropical disease. The means, primarily drugs and insecticides, of treating and controlling most of these diseases do exist. Yet despite a major expansion of primary health care in the 1980s, the burden of tropical diseases is increasing, and the prospects of controlling the major diseases—malaria and schistosomiasis—are worsening. Why then is so little attention paid to tropical disease control? Along with economic and political factors, ideological differences over how to organize disease control have impeded efforts to use the available technology to reverse or even halt the spread of diseases.

The main area of controversy over the past ten years revolves around the question of whether programs should be “vertically” organized or “horizontally” integrated. In somewhat oversimplified terms, vertical is hierarchical, technology based, and “categorical,” that is, focused on specific diseases. In contrast, horizontal integration is intertwined with primary care, community based, and close to the people. Many have blamed the failure to control tropical diseases on the fact that disease control programs have traditionally been vertically organized and were seen as neither sustainable nor organizationally efficient. Underlying this belief is a bureaucratic concern about vertical fragmentation, which in its most dramatic form might mean the establishment of parallel health delivery systems for tropical diseases. But there is little evidence that this has happened on a large scale; in fact, just the opposite has happened—even decentralized, integrated health service systems have neglected to control tropical disease.

If governments are to overcome the tropical diseases that cause so much misery in developing countries, they have to overcome “bureaucratic squabbling” and understand the institutional factors that are essential to implement control efforts effectively. To assist governments, a study, funded in part by the World Bank, looked into successful, effective, and sustainable health organizations that have succeeded in significantly reducing disease transmission and morbidity. The study covered tropical disease programs in Brazil, China, Egypt, the Philippines, and Zimbabwe, with a view to examining their common technological, organizational, and managerial features. Surprisingly, the study found that there is no “best” organizational structure for effective disease control. Rather, what matters is putting in place key institutional features.

Malaria is by far the most important tropical disease. The roughly 110 million clinical cases that occur annually result in 1–2 million deaths, especially among children in endemic areas. It is widely spread throughout the tropics but also occurs in many temperate regions (see map). Epidemics are frequent in rural areas experiencing intense economic development. Treatment and control have become more difficult with the spread of drug-resistant strains of malaria and insecticide-resistant strains of mosquito vectors.

Schistosomiasis, the second most prevalent tropical disease, is widespread, especially in sub- Saharan Africa, Brazil, China, Egypt, and the Philippines. Although seldom fatal, it causes severe debilitating illness in millions of people. It is often associated with water development projects, such as dams and irrigation schemes, where snails, which are the intermediate hosts, breed in water where people wash and fish.

Other diseases include the mutilating and debilitating leprosy, to which an intense social stigma is attached; African sleeping sickness, transmitted by the tsetse fly, and its equivalent, the South American chagas disease, both fatal if untreated; dengue and dengue hemorrhagic fever, transmitted by a virus and occurring in epidemics in Asia and Latin America; and lymphatic filariasis, which affects millions of people and leads to chronic disability or onchocerciasis, also known as “river blindness.”

Although the issue of organizational structure has dominated the debate so far, the study found that structural differences—vertical or horizontal integration—do not by themselves fundamentally affect program performance. For example, China’s schistosomiasis control program (vertical and categorical) comprises many specialized institutions. Brazil’s main institution for controlling endemic diseases—a semiautonomous, categorical entity—is a hybrid (centralized but horizontally integrated at the regional levels), while Egypt’s schistosomiasis control program is administratively fully integrated into the regional health services (horizontally integrated). In the Philippines, each of the programs studied (schistosomiasis, malaria, and tuberculosis) has gone through different phases (highly centralized and then integrated into the regional health services).

They decentralize operations but retain a single technological and policymaking authority, even within diverse structures. How the program is managed is what matters. Programs generally formulate strategy and develop technologies centrally but rely on field offices to tailor the program to local needs.

They are technology driven and action oriented. The programs in China, Egypt, and the Philippines have an international reputation for scientific competence and a sound knowledge of both the epidemiology of the diseases they confront and the available control technologies. These technologies are adapted for field applications through practical operational research, combining a thorough understanding of the disease and the population with good judgement about what can reasonably be achieved, given local resources and constraints.

Having determined what technology needs to be used, effective programs gear every detail of organization and management to applying that technology in the field. Brazil’s main institution for controlling endemic diseases, the former Superintendency for Public Health Campaigns (SUCAM), now reorganized as the Brazilian National Health Foundation (FUNASA), has a vigorous action mentality that drives its programs year after year. So powerful is the action orientation of the field staff that even three years after a major organizational upheaval, with many leadership changes at the center, the FUNASA field staff, with their commitment to “get things done,” still remain the backbone of disease control operations in Brazil. Field operations (e.g., malaria control) include detailed mapping of the households and locations where controls will be carried out, intradomiciliary spraying with insecticides, distribution of insecticide-treated bed nets or curtains, collection of blood slides through a network of volunteers, and most important, treatment of sick people.

Egypt’s approach to schistosomiasis control is similar, with efforts directed at waterways and snails, large-scale drug treatment, and health education. Realizing that contact with water is unavoidable, the Egyptian program has not tried to tell farmers to avoid water in order to reduce the possibility of schistosomiasis infection. Instead, the farmers are urged not to pollute the water and to go for treatment if they become ill. The program has sponsored a series of short television spots—played by popular local comedians and aired on prime time—to illustrate the disease transmission cycle, stressing how inexpensive it is to obtain tests and free drugs.

They view extension activities pragmatically. Field systems for health education and surveillance are built around a realistic view of what is feasible at the periphery and how difficult it is to change people’s attitudes and behavior. Community involvement is therefore limited to highly focused, task-related interactions with households, and few attempts are made to involve large community groups in routine operations. In fact, all organizations deviated from the common ideology-driven notion of community-based activity—the household rather than the individual or the community is the major focus of information.

Pest-control measures that normally focus on houses facilitate the identification of households. An example from Brazil shows how organizations have further refined their approaches after identifying households as the main point of intervention. Malaria control programs in Amazonia have traditionally moved the rural health worker (guardas) into a different area daily to spray insecticides, collect blood films, and educate families. This technique has since been changed to a “micro- zoning” approach, in which each guarda is responsible for a specific cluster of houses. The guarda is expected to move continuously from house to house and to spend nights in the homes of the families. Not surprisingly, the second approach has resulted in a lower prevalence of malaria.

They rely heavily on professional staff groups. The programs in Brazil, China, and Egypt have invested heavily in training and grooming technical personnel for eventual prestigious staff positions. The staff influence all operations, from designing program strategies, developing technological packages, preparing operational manuals, and backstoping the technical supervision to ensuring quality control of field operations through an elaborate control system (e.g., rechecking every tenth blood film and identifying every field worker by using a “sign-off system” on the front door of the houses visited). The use of such “staff groups” is similar for all successful organizations, regardless of their organizational structure.

The reliance on staff groups also facilitates the conscious development of a distinct organizational culture—a feature common to all the organizations researched. This “culture” involves the recognition of staff through the use of nonmonetary rewards such as “outstanding worker awards,” “seniority awards,” and training certificates. It includes a high regard for experience-based rather than academic knowledge and encourages a strong sense of public service and an equally strong commitment to personal and professional development.

As the threat from many tropical diseases increases, so too does the cost of inaction. The recent 1992 ministerial meeting on malaria urging affected countries and the international community to intensify disease control is an encouraging milestone. The key lesson of the study is that ideology-based approaches to the organization of disease control should be rejected. For disease control programs to be effective, attention must be paid to both the big picture (policies, strategies, and organization) and the small pieces (systems, procedures, and processes). A better understanding of the institutional features necessary for effective control programs will speed the needed action in the field. 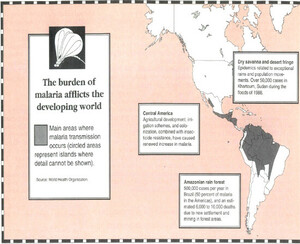 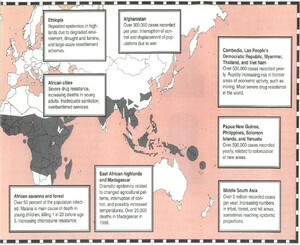