AFTER three decades without significant improvements in national incomes or welfare—and at a time when citizens are being asked to make major sacrifices in the name of economic reform—Africans are increasingly aware of the need to articulate a new, well-defined vision for the future.

During the 1980s, African countries were beset by a series of short-term financial crises that focused governments’ attention on solving urgent and immediate problems. The implementation of economic adjustment programs and the need to achieve short-term financial stability took precedence over all else. By default, ambitious development objectives were mostly abandoned.

Toward the end of the 1980s, however, leaders began to recognize that excessive preoccupation with short-term issues had led to the neglect of measures essential for sustainable long-term improvements in national welfare. Consensus began to emerge within Africa on the need to take stock and plan for a better future. In April 1989, in Addis Ababa, Ethiopia, African ministers of planning resolved to revitalize long-term development planning in the region. Eight months later, the World Bank published a report entitled Sub- Saharan Africa: From Crisis to Sustainable Growth: Long-Term Perspective Study, which sketched out a strategy for economic recovery.

The key elements were:

• a much more supportive environment for private sector development;

In July 1990, the Maastricht Ministerial Conference of African and International Donor Governments adopted a resolution recommending the preparation of national long- term perspective studies (NLTPS). At that time, 15 countries declared their intention to prepare these plans, which are now in varying degrees of preparation—Cote d’lvoire, Gabon, and Mauritius are the most advanced, while eight others are just beginning. Progress has generally been slow, because the task is complex and the process is hard to manage. The UN Development Programme has earmarked $9.5 million for a 5-year regional NLTPS support project, with a team of experts already in place in Abidjan, Cote d’lvoire.

The call for NLTPS is not to be interpreted as calling for a return to the discredited “5- year plans” typical of command economies. Rather, as currently conceived, an NLTPS is a process for launching a national debate on long-term development options—the objective being to reach a broad-based consensus on a set of feasible national development goals, policies, and strategies.

For an NLTPS to contribute usefully to mobilizing national development efforts, it must be based on careful analysis of a country’s natural and human resources and developed within each country’s cultural, regional, and international context. Plausible scenarios for long-term, sustainable economic and social development must be developed, providing a basis for building a national consensus. At a minimum, each NLTPS should review past successes and failures in achieving national development goals, identify the agents of change, evaluate the current socioeconomic-resource situation. It should also elaborate a prospective vision based on projections of growth by source and by the related demographic, educational, health, employment, and environmental trends.

It is crucial that the study be “home grown” and participatory, prepared as far as possible by citizens drawn from different segments of the society, including politicians, academics, business persons, nongovernmental organization leaders, youth, women’s leaders, trade unionists, and government officials. Indeed, it is the very process of analyzing prospects and defining options that increases national understanding of the choices that must be made, thereby helping a consensus on development priorities to emerge.

The development strategies derived from the NLTPS process should incorporate current sectoral development initiatives such as national environmental action plans, population action plans, and master plans for agricultural research (elaborated in the context of the Special Program for African Agricultural Research). The NLTPS should also clarify the roles of the state and private sectors, along with reconciling national and regional plans for cooperation or integration (e.g., the African Capacity Building Initiative, the Municipal Urban Development Program, the Regional Orientation Committee for Water and Sanitation, the African Charter for Popular Participation in Development, and the Sub-Saharan African Transport Plan).

While tailoring the exercise to individual circumstances, national development strategies should foster dynamic private entrepreneurship, effective and self-reliant grassroot communities, and efficient government services so that all of the social partners within the country may work toward shared national development goals. In so doing, the NLTPS would also provide the international donor community with a well-defined framework for enhanced financial and technical assistance.

By promoting national dialogue based on a well-grounded analysis of long-term options, the NLTPS will encourage debate on development priorities. But to be effective, the effort must go beyond laying out a long-term strategy. The NLTPS should link the strategy to the current policies of the government and define a viable macroeconomic framework for development actions in the period immediately ahead. By fully taking account of institutional capacity, availability of resources, and ongoing sectoral development activities, an NLTPS could help a government articulate multiyear national development programs that include public sector investment programs and macroeconomic and sectoral policies consonant with current external trade and financial constraints.

An NLTPS would normally give attention to seven key elements:

The macroeconomic framework. In the case of most African economies, complex model building will generally not be needed and, in any event, may not be feasible because of inadequate data. Nevertheless, it is useful to elaborate one or more broad scenarios that set out the magnitude and composition of the main macroeconomic aggregates: production, investment, and savings.

Demographic and spatial dimensions. Of crucial significance for almost every aspect of long-term analysis are projections of demographic trends and their spatial distribution. It is vital not only to establish credible targets for the growth of the population but also to estimate population movements. These trends will depend on the expected level and nature of urbanization and will influence the distribution of social and physical infrastructure requirements.

Sustainability issues. The long-term sustainability of any development strategy will depend on whether it adequately addresses the nexus of issues that relate explosive population growth to weak agricultural productivity and environmental degradation. This is why a country’s national environmental action plan should be seen as an integral part of any NLTPS. At the same time, consistency must be sought between demographic projections, population action plans, and proposed national resource development strategies. Particular attention should be paid to expected trends in agricultural productivity related to programs for agricultural research and national extension.

An enabling environment. Economic growth will depend on a government’s ability to create an enabling environment for private businesses. Such an environment has two distinct components: efficient infrastructure, and supportive policies and good governance. An NLTPS will therefore need to set out an infrastructure development strategy and credible private sector development policies. Neither will succeed unless the country can put in place an efficient service-oriented public administration, adopt measures to ensure accountability and transparency in its public agencies, and institute the rule of law.

Social policies. Development implies far more than economic growth. The progressive reduction of structural poverty will not occur without development strategies that explicitly address this objective. Targeted assistance for vulnerable groups is needed, especially to ensure food security and affordable social services. Gender issues will need explicit attention to ensure not simply equity, but also the empowerment of women to enable them to play their full role in development.

Institutional development. Africa’s poor economic performance can be explained in large measure by its weak capacity to implement development. So far, few countries have had explicit and coherent strategies to strengthen public and private institutions. No NLTPS will be complete if it neglects this dimension. Institutional development is not simply a matter of training and bringing in well-managed technical assistance. It requires clarifying the roles and inter-relationships of the key state institutions, as well as formulating long-term measures to build sustainable capacity.

Countries embarking on the preparation of an NLTPS have found it useful, as a first step, to establish a small, high-level NLTPS leadership group that can obtain the active support of the country’s political, business, religious, and other nongovernmental leaders to build national commitment to the process. The NLTPS leadership group—consisting of a small number of key ministers, officials, and prominent personalities outside the government—need to be backed by a core team of professional staff, which serves as the technical secretariat and is responsible for day-to-day management of the exercise.

Ideally, an NLTPS is to be viewed as a process with periodic reports as milestones. Within the first phase, lasting from 18 to 24 months, the government and the private sector should be able to define the strategic agenda that, at a minimum, contains an evaluation of the national issues, an assessment of the external variables affecting the country, and a specific action plan covering five to ten years. Subsequent phases would examine specific issues in great detail and monitor progress in the implementation of the strategic agenda.

If successfully conducted, the NLTPS process should increase awareness of the nature of the development challenge. Dissemination of the findings relating to the key development issues and options facing the nation—demographic trends, human resource development, environmental trends, management capacity, infrastructure needs, social conditions, and political factors—will entail (1) an open debate leading to their validation; and (2) definition of a strategic agenda and action plan that reflect the chosen policies and priorities.

The NLTPS process will assist those who are responsible for implementing the difficult economic, social, and political changes during the coming decade to generate broad-based support from key constituencies in their countries. This, in turn, will provide donor countries with greater confidence that the development programs they support will yield sustainable results. 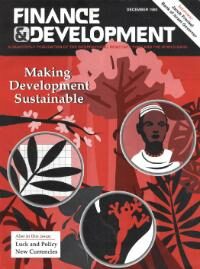