Twenty years ago, and in the face of growing populations and food shortages in South Asia, the world’s spirits were boosted by news of India’s and Pakistan’s seemingly sudden success in launching the “Green Revolution.” Both these countries introduced highly productive varieties of wheat and rice, employing new methods in the use of more and better chemical fertilizers, improved irrigation, and pesticides. As a result, countries that once feared famine began to produce enough to meet their needs, and even export.

As has happened so often, history is now repeating itself. An agricultural crisis is again looming on the horizon. But this time it has a global dimension, and policymakers worldwide must face a potentially explosive conflict of choices. New ways must be found to increase agricultural production by nearly 50 percent in the next two decades. This must be done, however, without depleting the earth’s soil and water resources, which will be needed to meet greater demands in the future.

Traditional agriculture may not be able to meet this challenge. This means that once again, international agricultural researchers and their national colleagues are being called on to play a major role in fashioning sustainable and productive agricultural systems for the planet.

Fortunately, this time, there are not 2 but 17 international agricultural research centers—all operating under the leadership of the Consultative Group on International Agricultural Research (CGIAR)—and another dozen centers that are cooperating with them or are in the process of being set up. Even more important, there is a qualitative change of focus in the centers’ research: increasingly, scientists are being asked by their financial backers and by the CGIAR’s Technical Advisory Committee (TAC), which coordinates their research, not only to develop sturdier and more productive plants but also cost-effective and labor-effective ways to protect and improve soils and conserve water. They are also giving more attention to environmental concerns by helping small farmers and farmers working on marginally productive lands. This truly represents, as the popular press has said, a “greening of international agricultural research” and of CGIAR.

What has brought all this about? There has been outside pressure, of course. But, principally, this shift has come as a healthy internal response by the international agricultural research community to some very frightening and challenging realities:

The short answer is that they are all making important progress, some more than others. Following the lead taken by TAC and the TAC’s own Sustainability Committee, all the centers have begun to revise their research gradually. The extent to which these changes are marked by creativity and daring depends on the quality of the leadership of each center and the ability of its scientists to adapt to the changing perceptions about agricultural research. All this represents a big step forward. Prior to making the changes that I have described, most of the centers concentrated on increasing the productivity of the food crops that they were mandated to cover. Relatively little attention was being paid to the protection of natural resources.

As yet, none of them has made fully systematic efforts to analyze the sustainability of the agricultural systems in which they are involved, taking into consideration not just economic and environmental trends, but also key institutional, political, and cultural factors. This is a huge and complex task for the agricultural support services, banks, and funding institutions to undertake in concert with farmers’ associations.

The centers cannot do all this alone. For one thing, they do not have the necessary funds. Nor do they yet have the political backing to generate them. But even more important, they should not try: to be effective, the greatest part of such a complex and politically sensitive effort must be carried forward by national governments and national institutions in each country. As for the international centers, they will need partners other than the national centers, which are dedicated to bringing about fundamental changes in farming methods and the way that governments support those efforts. These new partners will fill certain gaps in the centers’ arsenal of skills and activities and fit a certain profile:

What changes deserve the greatest attention of the centers and their partners?

They should give the highest priority to integrating realistic and cost-effective methods of protecting natural resources at the farm level into more research projects. Protection and improvement of the soil must be at the heart of every project. A good model is the work that ETA of Nigeria has done in introducing soil conservation techniques into many methods of producing cassava, a crop on which 600 million people depend.

The centers must also do more to directly address the broader economic, cultural, and political issues that affect agricultural systems, as well as environmental concerns. This involves collaboration with national partners, for example, in dealing with crucial issues such as land tenure and infrastructure.

The centers must examine—individually and collectively—more closely the agricultural problems of the relatively few regions of high or potentially high productivity that are central to success in radically increasing food production (e.g., India and Pakistan’s Punjab and the rice paddy systems in South Asia, South East Asia, and China). CIAT’s new strategic plan to examine the overall sustainability of tropical mid-level hill areas in Latin America is a move in the right direction. But that organization should, very soon, go beyond this first step to determine where and how a substantial increase in tropical Latin American food production can be achieved.

The centers should also place a higher priority on developing “farmer-friendly,” integrated pest management and integrated nutrient management techniques. The commodity-oriented centers must develop such techniques for whole agricultural systems where the crops on which their research concentrates are the principal—but not the only—crop involved. For example, the Center for Wheat and Maize Improvement, which is now doing important work on disease and insect resistant maize, should expand this to include integrated pest management research for other crops in maizedominated systems.

The centers need to step up their efforts for protecting traditional crops and related wild varieties, whose genes may prove crucial to achieving sustainability at the high production level required. This effort is urgent and must continue to involve all the centers, not just the International Board for Plant Genetic Resources in Rome, which is specifically charged with coordinating this task.

These relatively new tasks will require the support and cooperation of persons and institutions well beyond the centers and their normal partners. The centers will need to involve themselves progressively as the key scientific players on a new kind of team designed to attack all the dimensions of agricultural sustainability and rural poverty. These efforts will certainly require more money, probably in increasingly large amounts, as this decade proceeds. Some of it will have to be released by scaling back old programs that are now of relatively lower priority. Greater emphasis must be placed on mobilizing additional financial—and political—support for the centers. Innovative techniques may need to be employed to raise additional funds.

Special role for the Bank

The question is often asked: Why not rely more on the national agricultural research centers rather than the international centers? The answer is important: Increasing the productivity of food plants requires—and will continue to require—a broader global approach, one that is difficult for national centers to achieve. The centers are the research organizations best suited for managing such a global approach.

I do, however, believe efficient national centers that are able to adapt world agricultural advances to local needs must in time be developed in all countries and regions. To a considerable extent, the international centers can contribute, and already are contributing, to the strengthening of the national centers through training and joint research. However, we must face facts. Too many national research institutions are far too weak to meet the heavy scientific requirement that their national conditions require. Building adequate scientific research capacity in these countries may take a decade or more. The World Bank, the regional banks, and some of the national aid donors are working hard to strengthen the research organizations in developing countries. The Special African Agricultural Research Fund (SPAAR) supported by the Bank and a number of countries, is an example of such an effort

There is another special role for the World Bank. It is the only organization that has a strong enough resource base, and potentially enough political and intellectual leverage to take on the job of overall “managing director” of such an effort. It has a strong and vested interest in doing a better job in using broader agricultural planning to achieve its development objectives.

Admittedly, the Bank will have to make some major changes in its policies and operating style if it is to take on such a broad responsibility. But under its new leadership, the Bank looks like it is ready to embark on new paths. As a first step, the Bank could join with the centers and a growing number of willing countries in undertaking a series of country-specific discussions on agricultural sustainability and agriculture’s place in national economies.

Despite the daunting task ahead, I am encouraged by the progress that the centers have already made. Indeed, the “greening” of international agricultural research is moving into what one could call “middle gear” and forging ahead. 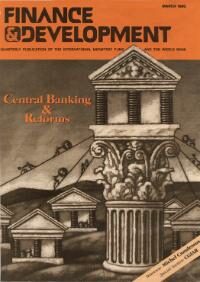