Since mid-1990, … no fewer than 12 African countries have entered into new arrangements with the Fund…. As of the end of July 1991, some 24 African countries were implementing economic adjustment programs supported by Fund arrangements, and total Fund credit and loans outstanding to these countries totaled about $7.5 billion. In most of these cases, the Fund’s assistance contributed to catalyze wide international support for these countries, including essential assistance from the World Bank. Simultaneously, negotiations for similar programs were about to be concluded for six additional countries and, in five more, serious negotiations were under way. So the prospects are that at least 35 African countries could soon be applying such strategies.

If I review the recent experience of African countries, I see a broad spectrum. There are the tragic cases of the countries that have suffered natural calamities or civil disturbances, and have regressed; some of these are now in deep crisis. And then there are those countries that, regrettably, failed to implement good policies, or have followed stop-go adjustment efforts; they have shown inferior results. But by contrast, it is encouraging that so many countries of Sub-Saharan Africa have embarked courageously on comprehensive structural adjustment programs, have implemented them with perseverance, and have adapted their policies when necessary to changing external circumstances, such as adverse shifts in the terms of trade.

The specific features of these programs vary widely from country to country, reflecting different individual needs. The picture is far from uniform. Some countries were quick to deal with their economic problems, maintained firm and effective management of their economies, and have achieved an enviable economic performance over many years; here one thinks of Botswana and Mauritius as good examples from which we in the Fund have learned much. Then there are others that have been implementing far-reaching reforms with IMF support for several years; this group includes The Gambia, Ghana, Kenya, Malawi, Morocco, Nigeria, Senegal, Togo, and Tunisia. The road has not been easy for these countries, but their reforms are producing positive results, and should yield important long-term benefits. And then there are those countries that embarked more recently on structural reform programs, which are now beginning to show encouraging initial signs of success.

These excerpts have been taken from an address by Mr. Camdessus on the occasion of the 25th anniversary of the Bank of Uganda, at Kampala, in August 1991.

The common feature of the programs is their focus on laying the foundation for sustainable development, by their emphasis on reducing financial imbalances, removing structural impediments to private economic initiative, providing a supportive infrastructure, and creating efficient and effective institutions, while making every effort to shelter the poor and the vulnerable…. We put more and more emphasis on this effort to establish social safety nets and to suggest more concentration of budgetary efforts on health and education….

For most countries of Sub-Saharan Africa, the process of structural reforms will have to be sustained for many years, if they are to achieve the sort of successes that have been seen, for example, in Mauritius and Ghana. But in many of these countries, the reforms are already making a measurable difference. A recent review by the IMF of the growth performance of all countries with programs supported by the SAF [structural adjustment facility] and ESAF [enhanced structural adjustment facility] (most of them in Africa) has shown the following results: a median annual growth rate of 4.2 percent over the last three to four years, compared to a median of about 2.6 percent in the three-year period preceding the introduction of these programs. Also the export performance improved sharply in many of these countries, as nontraditional exports responded positively to more realistic exchange rates and structural changes that provided better incentives for trade.

First, it is possible to reverse the unacceptable trend of the last 20 years of continuous deterioration of per capita income in Africa: in all these countries, this trend has been reversed and our programs are reinforcing this positive trend for the future.

Second, that it is possible to improve the external balance of African economies and in so doing, create jobs and reduce their vulnerability, in spite of what has been a continuous deterioration of their terms of trade.… This demonstrates that African countries can liberate themselves from dependence on the fate of their traditional products.

All this also suggests that there is a clear link between the implementation of structural reforms, underpinned by sound financial policies, and the success of economic programs….

Despite these generally favorable first results of structural reforms, we cannot ignore the fact that progress has frequently been slower than expected and that countries will need to persevere with strong efforts for many years to come. It is only by steadfast implementation of disciplined macroeconomic policies and fundamental structural reforms, particularly those that allow private initiative and entrepreneurship to flourish, that countries will achieve strong growth over the medium and long terms. 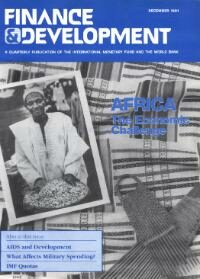